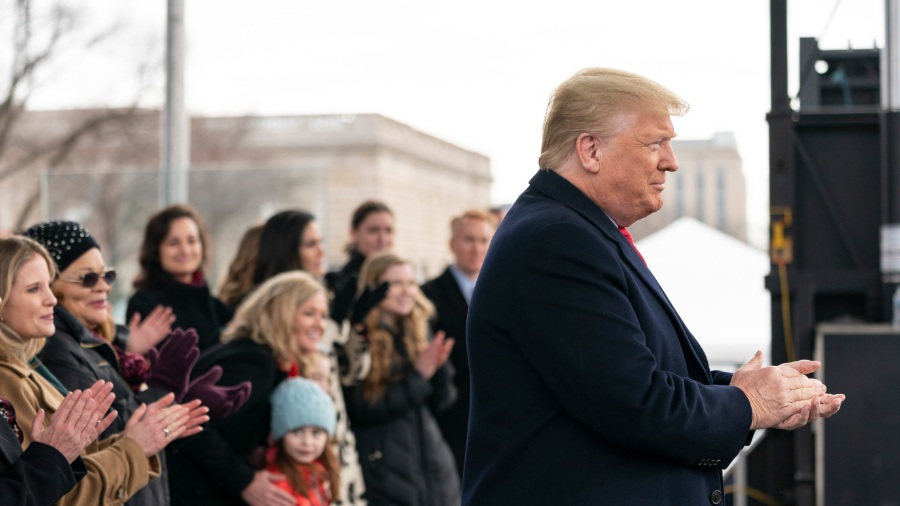 On January 18, the Global Center for Religious Research posted, “An Open Letter to Evangelicals of Moral Conscience.” The subtitle read, “Help us end the cult-like determination to ignore, excuse, and justify Mr. Trump’s blatant and obvious moral depravity!”

It is with great sadness that we, the undersigned faith leaders, biblical scholars, philosophers, and other academics, many of whom began our walks of faith in the evangelical tradition, hereby call on all American evangelical Christians of moral conscience who recognize and regret the corrupting and corrosive influence of Donald J. Trump, to join us in repudiating those evangelical leaders and institutions that have politically entangled themselves with him. We believe this action to be an urgent moral imperative because these leaders and institutions, which have unfortunately become the dominant voice of modern American evangelicalism, have shown themselves to be obstinately bound to the control of influences overtly opposed to the gospel of Jesus Christ and have resisted repeated pleas to disentangle themselves.

The letter ends with these words, in bold:

Until such time as those evangelical institutions and leaders disentangle themselves from the corrupting power and privilege that their complicity with Mr. Trump is providing them, we call upon Christians of good conscience to disentangle themselves from them, join us in repudiating them, and be prepared to explain why. We know it won’t be easy. We know it may take different forms for different people. But we believe that to heal our individual consciences, to heal the conscience of our country, and to heal the conscience of American evangelicalism, it must be done.

After all, in your article, you cite Rev. Brian McLaren, who in 2012 presided over the gay “marriage” of his son. He is also one of the 58 listed signers.

You also cite Pastor John Pavlovitz, who in December, 2018, tweeted, “When hopelessly phobic people of faith like @DrMichaelLBrown claim that God is against ‘homosexual practice.’” And again, “This is the kind of fearful, Jurassic understanding of sexuality that is getting people killed. Someone else’s gender identity, sexual orientation, marriage, or sexual activity are none of your business.”

I’m sorry, but I have a hard time taking the moral outrage of men like this seriously, however sincere they may be. (For the record, I have made repeated efforts to reach out to Pastor Pavlovitz, ranging from offering to sit with him in private to having him as a guest on my show. He has not responded to a single invitation to date.)

Yet Revs. McLaren and Pavlovitz are accusing evangelicals of hypocrisy because we feel President Trump is a better choice than Hillary Clinton (or any of the current Democratic candidates)? Because we feel he is doing a better job at stopping the slaughter of the unborn? Of combating world terrorism? Of fighting for religious liberties? Of opposing LGBT extremism? Of standing with Israel?

We could even argue that Trump is doing a better job of helping the poor, not to mention working harder for prison reform.

But no — if we support him, we are the hypocrites.

My apologies for being blunt, but you might want to look in the mirror again before lashing out at us.

Another signer is The Very Reverend Penny Bridge, who has earned her own page on the San Diego LGBT Pride website. Among her many accomplishments is “offering blessings at events including three Harvey Milk Diversity Breakfasts” and serving “as spiritual advisor to the Imperial Court’s Queen Mother of the Americas, Empress Nicole the Great.” And they accuse Trump of “moral depravity”?

Along with many of my evangelical colleagues who support Trump, I hate the damage he does with his words. I deplore his attacks on individuals. And I believe that, in some ways, he has degraded the office of the president.

In fact, it is rare that I write an article in support of Trump without adding in these caveats, to the point of sounding like a broken record. (Evangelical leaders close to Trump do not celebrate his shortcomings. Rather, they seek to be godly influences in his life, for which they should be commended.)

I’m also the author of the book Donald Trump is Not My Savior: An Evangelical Leader Speaks His Mind About the Man He Supports as President.

And so, over and again, I have stated that, as followers of Jesus, our identity must be found first and foremost in solidarity with the Savior, to whom we owe our very souls. The president simply gets our vote — and, at this point, President Trump will have my vote in 2020.

But that is not enough for the writers of this Open Letter.

To satisfy their concerns, we must separate from President Trump and renounce him completely. Yes, this is how we are supposed to repay the man who has taken up evangelical causes and concerns in a way that is unprecedented in modern times.

Sorry, but I don’t think so. In fact, to do so would be quite unchristian.

One of the document signers is Rev. Dr. Randall Balmer, who has also served as a contributing editor to Christianity Today. On the one hand, I can agree with his sentiments (quoted by Prof. Scot McKnight) that, “Christianity operates best from the margins of power, not in its center.”

At the same time, I recognize that, already in 2006, when George W. Bush was president, Prof. Balmer wrote the book, Thy Kingdom Come: How the Religious Right Distorts the Faith and Threatens America: An Evangelical’s Lament.

I actually own this book and can say “Amen” to much of its contents. At the same time, Prof. Balmer’s opposition to Trump can hardly been seen in a vacuum. This was the inevitable trajectory of his personal evangelicalism.

Accordingly, the Open Letter repeatedly cites Mark Galli’s rightly-criticized Christianity Today editorial. (His name is actually mentioned 11 times in the article. For my responses to Galli, see here and here.)

President Trump Isn’t All of That

The Open Letter states, “When confronted with statements of Mr. Trump that are racist, misogynistic, xenophobic, or known falsehoods, they occasionally critique his ‘word choices’ but almost never address the underlying prejudicial nationalism behind it.”

To be sure, I too have faulted many of our leaders for their tepid responses to some of the president’s more egregious words. But what if we do not feel he is a racist? Or misogynistic (at least, not so today)? Or xenophobic?

Rev. James Robison has told me that he has spoken with every adult member of the Trump family, and all of them have expressed their concern for the well-being of all Americans, especially the poor and downtrodden. Perhaps that should carry some weight in our assessments as well? Perhaps there is something inherently Christian in their attitude?

No Special Power or Privilege

Ironically, the Open Letter ends with reference to “the corrupting power and privilege that their complicity with Mr. Trump is providing them” but fails to mention how “progressive” Christians have worked side by side with liberal Democrats for years.

Somehow, though, when the shoe is on the other foot, there is no “corrupting power and privilege.” It is only when conservative evangelicals work with a sitting president that this exists.

I should also emphasize that evangelicals are not seeking special power or privilege. Rather, we are fighting to preserve our essential, Constitutional freedoms. And we are fighting, above all, for the lives of the unborn, the most innocent and vulnerable among us.

Had the Open Letter raised nuanced concerns about aspects of evangelical loyalty to Trump, or worse still, evangelical over-exaltation of Trump, I would have offered my hearty agreement.

But it is so overstated, not to mention riddled with its own hypocrisy (which I barely sampled here), that it has disqualified itself.

And so, to the scholars and religious leaders of the Global Center for Religious Research, I say this: I do not doubt your sincerity and I certainly do not demean your scholarship. I simply ask you to look in the mirror once again, Bible in hand (as I often seek to do), and see if you find some beams in your own eyes that need to be removed (Matthew 7:1-5).