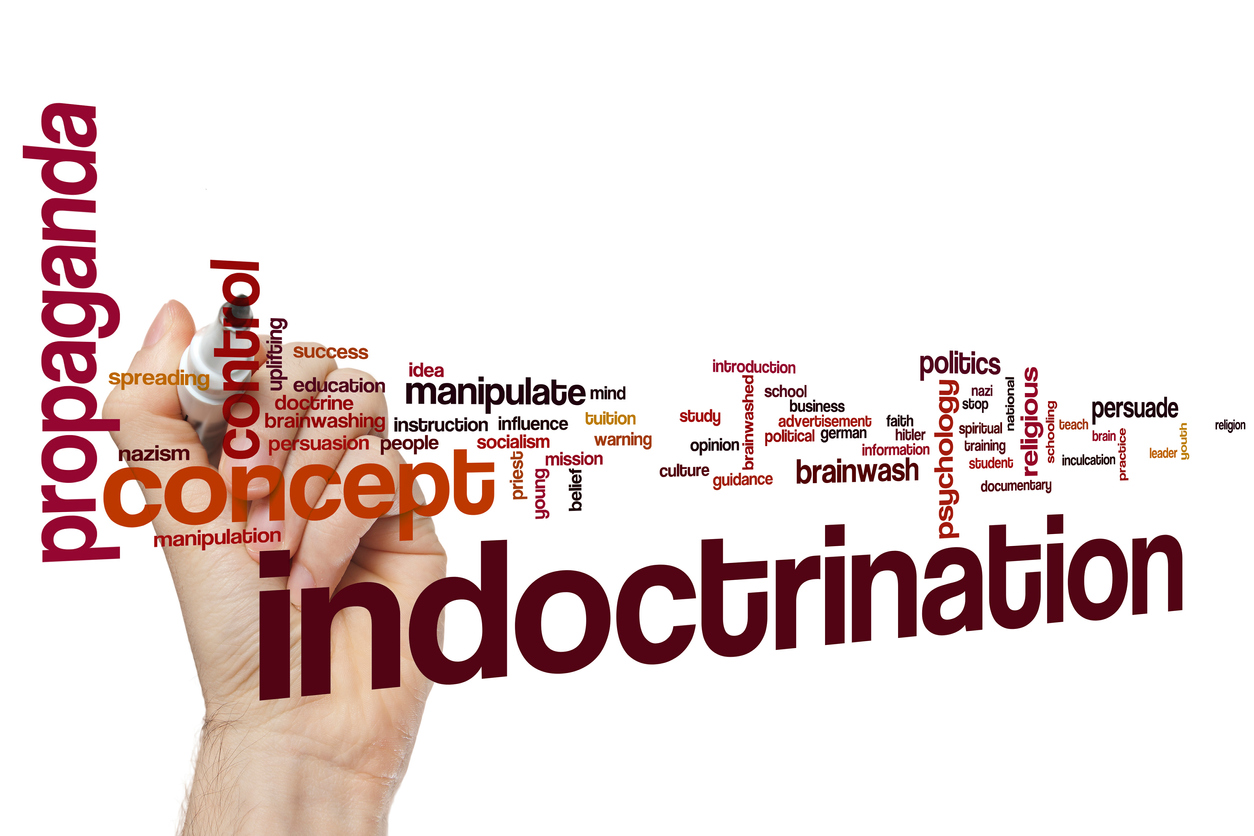 Next week, millions of American children will transform into witches, pirates and superheroes. That transformation is only imaginary and will last only for one round of trick-or-treat. However, every day in our public schools our children are being transformed, perhaps permanently, into angry, frightened progressive zombie activists. And that’s scarier than any Halloween ghost story.

The indoctrination infestation is spreading all throughout K-12 education. A big reason this is happening is because only 27% of K-12 teachers identify as Republicans. The left dominates the public school system. Teachers hold a captive audience of impressionable young minds for 13 years. Gone are the Three R’s of old, replaced with Resistance, Revolution and Rejection of all traditional values. Gone is the goal of raising productive, independent, liberty-loving citizens. Instead, these ideological Dr. Frankensteins are building little political monsters.

Let’s do a general survey of the many areas in which this is happening.

Just a few weeks ago, thousands of K-12 students skipped school in New York City to protest climate change. The city gave 1.1 million students permission to leave school for this “strike.” (What kind of strike can it be when the kids get permission to do it?) It sent a message to children that protesting climate change was an important activity. But it disregards all the scientific evidence which shows that man’s effect on global warming is negligible.

There are also school walkouts supporting gun control. The message against guns is so heavily pushed that schools are not adequately prepared to handle mass shooters. Most schools prohibit teachers and staff from carrying firearms.

Children are being taught that illegal immigrants are good people simply seeking a better life. They supposedly come from horribly oppressive countries and have no choice but to illegally cross the border. Children aren’t told about the crimes they commit, or the fact they commit crimes at a higher rate than the general American population.

One teacher told his students not to cooperate with ICE. “If ICE ever came on campus then we should toss our I.D. cards and switch places not according to our seating chart and refuse to give ICE agents our name,” he said.

Islam is described as a peaceful religion which is merely misunderstood.

Islam is described as a peaceful religion which is merely misunderstood. A writer for Conservative Daily News says he sat through an entire month of a “Muslim tolerance course” in school. He said the teacher “outright lied and used disinformation to tell us that throughout its history Islam had been the most tolerant, peaceful, and benevolent major religion.”

The LGBT agenda is promoted as a noble cause, there is no room for dissent. My niece attended a high school where students could go eat lunch every Wednesday in a different area to show their support for the LGBT agenda. Almost no students dared opt out, there was so much pressure on them to participate.

Democrats are held up as champions of minorities and women, but their real history of opposing the Civil Rights Act of 1964 and women’s suffrage is omitted. Nor do the public schools teach that Republicans were the party that wanted to abolish slavery. Slavery was abolished under Abraham Lincoln, a Republican. The Founding Fathers are denigrated as racist, sexist old white men. Historical revisionism is taking place, portraying women and minorities as playing a more prominent role in the beginning of this country than they really did.

When my brother was in high school, his feminist history teacher instructed the students to write a paper about the huge role women had in the founding of the country. He refused to do the assignment, since he didn’t believe it was accurate. The teacher attempted to flunk him. But it was an AP History class, and the teacher had told the students if they passed the AP exam they would automatically get an A in the class. He not only passed the AP test, but got a 5, the highest score possible. He had to appeal to the principal to get the teacher to honor her word.

Capitalism is described in our schools today as a greedy system no better than the competing philosophies of socialism and communism. The failures of socialist and communist countries is downplayed, if addressed at all.

Race Rears its Head, of Course

Schools are increasingly requiring ethnic studies classes in order to graduate. Los Angeles, San Francisco, San Diego, Sacramento, Oakland and Stockton are some of the counties in California that require this. California is about to mandate the class statewide. These classes teach that there is a white patriarchy responsible for failures in the minority community. Whites are privileged due to their skin color.

The U.S. is criticized as an oppressive regime. The good America has done around the world is ignored. The American flag has been taken out of classrooms as well as the Pledge of Allegiance.

The American flag has been taken out of classrooms as well as the Pledge of Allegiance.

Teachers criticize the U.S. for racism and police brutality, without explaining the other side.

One teacher handed out these fill-in-the-blank sentences: “President Trump speaks in a very superior and _________ manner insulting many people. He needs to be more _________ so that the American people respect and admire him. Another student reported teachers weeping uncontrollably and consoling students the day after President Trump won the election.

Teachers are not shy about calling for single-payer healthcare.

Teachers are grading papers based on political positions, not the ability to think and reason. They call on students whose viewpoints they agree with more than those dreaded conservative students.

This was Predicted Years Ago

We can’t say we weren’t warned. In 1840, a special legislative committee in Massachusetts presciently stated.

The right to mold the political, moral, and religious opinions of … children is a right exclusively and jealously reserved by our laws to every parent; and for the government to attempt, directly or indirectly, as to these matters, to stand in the parent’s place, is an undertaking of very questionable policy. Such an attempt cannot fail to excite a feeling of jealousy, with respect to our public schools, the results of which could not but be disastrous.

These teachers are abusing their positions of power and influence. Instead of teaching children how to think for themselves, they are teaching them what to think. Creating an army of the Walking Left.

The question is, how do we stop this?

It begins with awareness, knowing what’s going on in our schools, what our own kids are getting injected with. Keeping an eye out for radical experiments or pilot programs in states like California that’ll soon filter to yours.

Schools are mostly controlled at the local level. Parents need to get involved and join school boards. Federal laws, even if passed under a Republican administration, don’t turn out so well as we saw with No Child Left Behind under George W. Bush.

It is relatively easy even for a conservative to get elected to a school board, due to the small size of the election and lack of interest. Instead of continuing to just complain about the situation, conservatives need to do something about it and get involved. Control the boards and you regain control of our kids.

The David Horowitz Freedom Center has drafted legislation for the 50 states that would create a “Code of Ethics for K-12 Teachers.” It would enforce traditional rules of fairness and non-partisanship in our public school systems.

Teachers would be forbidden from taking partisan political positions in the classroom which include endorsing candidates or pending legislation. They could not introduce controversial material not germane to subjects being taught. Nor could they impede access of military recruiters or federal law enforcement authorities to the school site.

Teachers would be prohibited from advocating either side of public controversies. They could not segregate students by race or single out one racial group as responsible for the sufferings or inequities of other racial groups.

And let’s not forget the options of home schooling and private schools. It is important to pass laws for school choice so poorer children will have the option of private schools. Remember Proverbs 22:6: “Train up a child in the way he should go and when he is old he will not depart from it.”