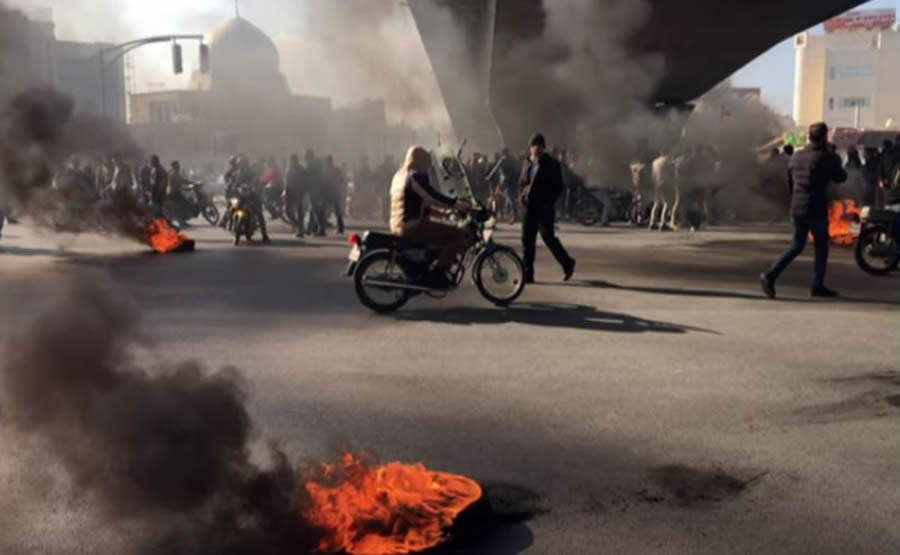 Unsurprisingly, Iranian officials have already attempted to blame shady foreign infiltration for the mass protests that began on Friday. Of course, the allegations are never backed up by evidence and the regime makes no effort to explain how such protests have spread to 130 cities and why it has been necessary to slaughter 200 innocent young Iranians on the streets in just 3 days. According to reports, the victims are mostly young adults and teenagers, many of them shot in the head and chest.

Even in the midst of all of its propaganda, the regime has at times been forced to acknowledge what seems obvious on its surface: that the forerunners of the current protest movement have been organized domestically, as a sincere reflection of popular sentiment.

The most recent analogue to the current uprising took place in December 2017 and January 2018. While those protests were still in full swing, Supreme Leader Ali Khamenei delivered a televised speech in which he blamed the main Iranian opposition Mujahedin-e Khalq (MEK) for the unrest. On Sunday, he once again blamed the MEK for the recent uprising.

Regime officials have long attempted to downplay the threat that it poses to their hold on power. While using draconian punishments to discourage public affiliation with the MEK inside Iran, the regime has also relied on a campaign of disinformation to portray the group as marginal and “cultish.”

Khamenei has said that the MEK “planned (the protests) for months.” He specifically recognized the organization’s fingerprints on the slogans that characterized the 2018 uprising. Among these were phrases targeting Khamenei himself. The chants of “death to the dictator” have notably re-emerged in protests over the last few days, which were triggered by a tripling of fuel prices.

The dire economic crisis, caused by decades of mismanagement, has been exacerbated by the reimposition of US sanctions. Routine protests in Iran squarely target the regime for corruption and mismanagement of the economy.

The current uprising began just hours after the regime announced that it was raising fuel prices by more than 50 percent. Once again, an economic spark transformed into calls for regime change and democracy. It is practically inevitable that this push is being guided, once again, by the MEK.

Despite the nature of the regime, the Iranian people are widely recognized as one of the most well-educated and secular-minded populations in the Middle East. It should go without saying that those people are overwhelmingly in favor of the MEK’s democratic platform and the 10-point plan laid out by President-elect of the National Council of Resistance of Iran, Mrs. Maryam Rajavi.

The Iranian regime spends large sums of cash and broadcasts astonishing amounts of propaganda to claim that the MEK has no domestic power to challenge the existing regime directly. The current protests demonstrate the opposite. The MEK’s “Resistance Units” are seen actively guiding and organizing protests. In over 130 cities, slogans, chants and targets are astonishingly similar and coordinated. Very tellingly the regime’s senior officials have begun acknowledging the role of the MEK.

The Secretary of the regime’s Supreme National Security Council, Ali Shamkhani, said over the weekend that many of those arrested belong to the MEK. And, the chief of the regime’s Basij paramilitary forces admitted that the “MEK has cells (and units) within our country.”

The Backing of the International Community

So far, over 200 demonstrators have reportedly been killed by the regime’s savage suppressive forces. Iranians from all walks of life continue taking to the streets because they know that they would have the backing of the entire MEK and the affiliated Iranian Resistance movement. Imagine what those same people could be motivated to do if they knew they had the backing of the entire international community. Iranian opposition leader Maryam Rajavi called on the UN Secretary General António Guterres to brief the Security Council about the atrocities perpetrated by the Iranian regime and urged him to convene an extraordinary session of the Council.

Up to this point, Iran’s pro-democracy movement has been largely isolated from the outside world. Even as regime officials are blaming protests on the West, they are doing everything in their power to make sure that there is no communication between domestic protestors and their supporters beyond Iran’s borders. Currently, the regime is in the midst of the greatest internet shutdown in its history. And far from wielding their supposedly powerful influence of the Iranian people, Western governments have done nothing to stop it.

Those governments must not allow themselves to be cowed by their fear of lending credence to Tehran’s false allegations. They also cannot afford to remain ignorant about the democratic nature of the Iranian Resistance movement or the protestors’ demands. The 2018 uprising was a missed opportunity for the world to assist Iran’s activist community in exerting pressure that could lead to the Iranian regime’s overthrow. Now that opportunity is coming around again, stronger than ever. This time, all advocates for Middle Eastern democracy should recognize it, and act accordingly.

Silence vis-à-vis crimes against humanity perpetrated in Iran every day is absolutely unacceptable. The world community should advocate for the right of the Iranian people to freedom of assembly and overthrow of tyranny.