From Atlanta to Kansas City to Minneapolis — the current epicenter of national race-related tensions — churches and Christian ministries stood in public witness for racial equality. 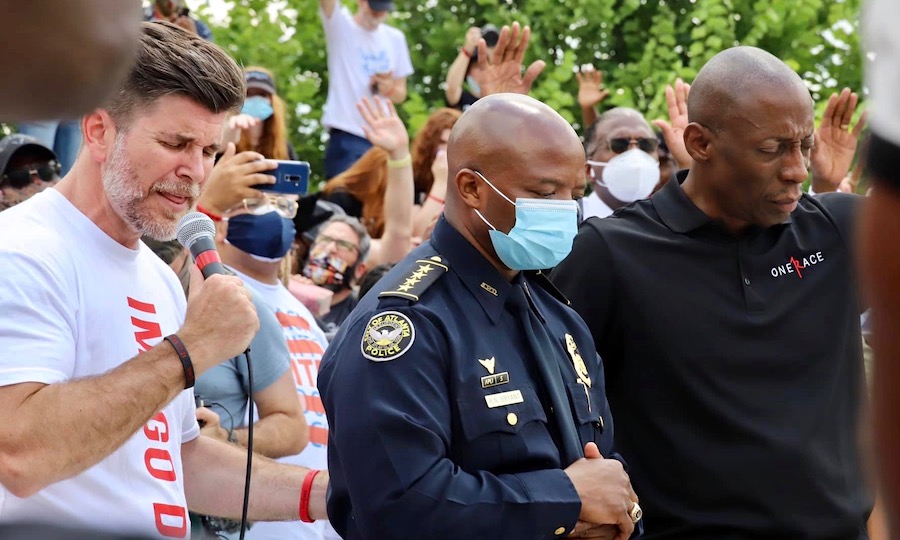 Long celebrated as a day of freedom in communities of color, this year’s Juneteenth set the stage for citywide prayer events led by local churches.

Several made headlines for the exceptional peace and unity observed among participants. In Atlanta, over 13,000 Christians united under the banner of OneRace Movement.

More than 400 churches were represented at a daylong worship service and march held downtown. It came only one week following the death of Rayshard Brooks, a 27-year-old black man killed after attacking Atlanta police officers during a DUI arrest.

“The day started with worship inside Centennial Park, an area that has been the site of intense protests,” said reporter Justin Felder of Fox 5 Atlanta. “It [brought] together churches of different denominations and cultures. Around 11:30, that diverse faith-filled group set out for the Capitol. … It was a powerful scene with a strong message.”

“On June 19, 1865, [the] battle had already been won,” said Thomas. “The Union Army that showed up in Galveston, Texas [had] toppled the Confederate strongholds. People were unaware their freedom had already been purchased.”

He translated historic events to the present day. “We are now the army of peacemakers who show up and say, ‘Justice is here,’” he said.

“Now we need our communities, governments, economic system, and education system to reflect the preeminence of Christ, who has won it all.”

An apex moment during the March on Atlanta occurred when two pastors, one black and one white, invited the city’s interim police chief to the center of their gathering.

Chief Rodney Bryant had been installed when former chief Erika Shields stepped down only days earlier following the death of Brooks.

“This man right here has taken a mantle on himself of leadership that we want to support,” said Pastor Billy Humphrey of New Bridge Church in Lawrenceville.

He seemed to sense some resistance in the diverse crowd, and addressed it. “Listen, you can’t just pray for justice,” said Humphrey. “You have to pray for righteousness. That’s where his throne is established. In Christ, we don’t have enemies. We cry for justice and we cry for mercy.”

Humphrey and his friend Bishop Garland Hunt, co-founders of OneRace Movement, laid hands on his shoulders. “We want you to know, Chief Bryant, that we love you,” he said. “The church in this city loves you. We appreciate you and the work that you’re doing.”

The scale of the Atlanta faith-driven protest, which ended at the State Capitol, gave OneRace new visibility in Georgia’s largest city.

Since 2017, more than 250 pastors have committed to racial unity through ongoing relationship. They meet every month (or more often) in small groups mobilized by OneRace.

“This is not just posturing, having the black and white together,” said Bishop Hunt, a pastor and longtime civil rights advocate. “We’ve had years now of relationships that have been built. “

He addressed the thousands gathered. “Out of that, you are a result of what God has called together,” he said. “We refuse to allow anything to divide us.”

The gospel-centered coalition has sought to navigate difficult topics. One consuming many Christians today is whether saying ‘black lives matter’ endorses the BLM platform. Clergy addressed this from the stage.

“This day, we make the enemy angry,” said Pastor Jesse Curney of New Mercies Christian Church in Lilburn. “Because men of all color have come together to give God the glory and the praise, while we say: black lives do matter.”

He cited John 8:32. It states: You shall know the truth and the truth shall make you free. “When we say ‘black lives matter,’ we’re not saying anybody else does not matter,” said Curney.

“We’re making a statement that liberation is for everybody,” he clarified. “Racism is sinful, and to hate is wrong. We’ll never be the country that God calls us to be if we do not unite and accept everyone as equals.”

From their unity, leaders pressed for policy change. “Black lives matter to Jesus, and they should matter to us and our legislators,” said OneRace executive director Josh Clemons. “Legislators [should] begin to consider systemic racism and systemic oppression of communities of color.”

3. Standing in Prayer Along the Dividing Line

That same  evening in Kansas City, Missouri, nearly 6,000 people from more than a hundred local churches took to the streets. Actually, one particular street: Troost Avenue, which historically divided the city along ethnic lines.

“Peace is not the absence of conflict, it’s the presence of truth” said Pastor Greg Ealey of Colonial Presbyterian Church. “As we call out to God on Troost Avenue, we’re asking God to bring his truth. May [He] use that truth to unify His church so that we can fight against the injustices in our cities.”

Thousands of believers formed a human prayer chain that stretched for more than 10 miles. Each person wore a mask and white tape handwritten with black ink. They wrote one word on their tape, such as: justice, empathy, equality, life, and peace.

For one hour in prayer, they stood along Troost Avenue. “There is an opportunity for us to build on what we have in common,” said Pastor Ealey.

Driving a silver sedan, the balding black man wiped away tears as he observed the sight before him. Black, white, and Hispanic believers stood in prayer together on sidewalks lining Troost Avenue.

“[He] had to pull over, unable to drive due to his tears,” said Thomas. “They flowed as he witnessed this expression of love and lament.”

The diversity was more than skin-deep. Christians from Nazarene, Catholic, Baptist, Methodist, Presbyterian, AME, Lutheran, and non-denominational churches all participated. Whether inner city or suburban, small congregations and megachurches united for this effort.

One observer found it particularly moving. “As a Texan, I’ve always wanted the rest of the country to celebrate Juneteenth,” said Will Ford, an author and professor in the Dallas area.

“Of course, I wish the circumstances by which this came about were different,” he added. “But I’m glad that prayer for healing the racial divide and celebration of freedom [has] blanketed our nation.”

Ford, a descendant of slaves, co-authored The Dream King with prayer leader Matt Lockett. The two have recently appeared together on The Eric Metaxas Show, The Daily Signal, and other media outlets to share their amazing racial reconciliation story.

5. Finding God at the National Epicenter of Pain

Entitled We Hear You, it follows director Andrew Chalmers as he captures how Christians respond in the wake of George Floyd’s death.

“I felt so grieved but didn’t know how to appropriately respond,” said Chalmers in an interview. “My desire has been to learn, listen, and try and make a difference.”

His friend Thomas serves as a guide on the journey. The film chronicles events in multiple cities co-led by Civil Righteousness. Notably, the film features Pastor Curtis Farrar of Worldwide Outreach for Christ. That Minneapolis church is located across the street from where Floyd was killed.

Chalmers and friend Bennett Counts completed the film, their first documentary, in only a week. They hope it will be a discussion starter as Christians grapple with racial justice issues.

“We need to engage and lean into painful conversations,” he said. “I believe the Church is going to take a leading role. It’s about finding the type of healing and reconciliation that only God can produce.”