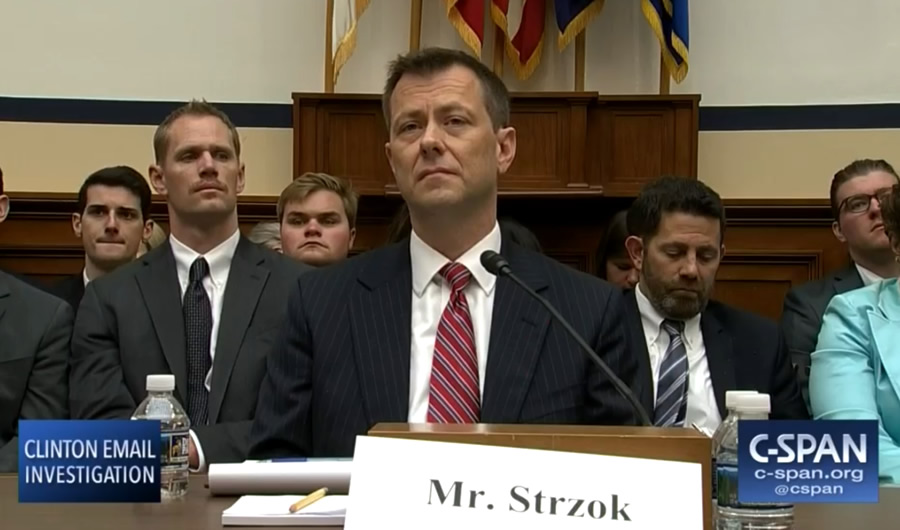 Peter Strzok appears before a joint hearing of two House committees on July 12, 2018.

We interrupt this awful news week for a huge unintentional laugh.

Thoroughly disgraced former FBI agent Peter Strzok is reportedly suing the Department of Justice and the FBI to get his old job back. (I’ll pause while you fall to the floor laughing.) So, could this be any more outrageous? Oh, yes, it absolutely could. He is also suing for back pay. (I’ll pause again.) And damages.

Maybe this stunt is being carried out by publicists on the theory that there’s no such thing as bad publicity, because there’s little else he could get out of it. Keep in mind, this is the agent who texted back and forth with FBI colleague/paramour Lisa Page literally thousands of times, very often conveying his personal political opinions about Trump while he was investigating him. Many of these texts were along the lines of how he thought Hillary should win in 2016 “100 million to 0.” He could “smell the Trump support” at a suburban Walmart. He referred to Trump as “loathsome,” “a disaster,” “awful” and “an idiot.”

Strzok texted Page, in reference to Trump’s possible win, “We’ll stop it.” He later said he meant they’d stop it at the ballot box, but given the context, as well as Page’s sworn testimony that his texts meant exactly what they appeared to mean, it seems clear that he meant they’d personally work to prevent Trump from becoming President.

It was through their texts that we learned about the “insurance policy” they talked about in “Andy’s office.” Just the fact that he, as a career FBI official, texted these things is about as inappropriate as it gets. (In fact, it’s what made Robert Mueller have to fire him from the special counsel team once it finally got out. By the way, why isn’t he suing Mueller?)

And if people at the FBI and DOJ were actually conspiring to keep Trump out of the Oval Office — the evidence of which appears increasingly rock-solid — that’s about as illegal as it gets. So, hypothetically, if he were to get his old job back, an important consideration might be if he were able to do it from a jail cell, through some kind of “work-from-home” plan.

Amazingly, Strzok was in charge of both the Hillary non-investigation, code name “Mid-Year Exam,” and the FBI’s ginned-up investigation into Trump’s non-existent “collusion” with Russia, code name “Crossfire Hurricane.” He was one of the agents sent by James Comey to interview Michael Flynn at the White House during the first few hectic days of Trump’s presidency. And he was hired by Andrew Weissmann to serve on Mueller’s special counsel team, where he would have remained for almost two years if his troublesome anti-Trump texts with Lisa Page hadn’t become public. But before that happened, in 2016-2017, he somehow turned up everywhere, the Forrest Gump of the FBI.

According to the suit filed Tuesday, Strzok claims his firing in August of 2018 was “the result of unrelenting pressure from President Trump and his political allies in Congress and the media.” Wow, these guys blame Trump for everything. And it’s hilarious that he claims his firing was politically motivated, considering the things he talked about that really were politically motivated. He has said under oath that he never let his politics impact “any official act” he took. But as Alan Dershowitz told Sean Hannity Tuesday night, “He was appropriately fired … he wasn’t fired for partisan political reasons; he was fired because he didn’t show the objectivity and neutrality required of a federal agent, particularly a member of the FBI.”

Strzok’s lawsuit claims that the DOJ’s release of his texts was “deliberate and unlawful,” a violation of the Privacy Act. Never mind that he and Page were texting to each other on “company time” on their FBI-issued work phones. Those communications did not belong to them (just like all those “personal” Hillary Clinton emails that were rendered unretrievable with BleachBit, but I digress).

Not only had Strzok politicized his job, but he was also having an extramarital affair with his FBI colleague, who was also married. You’d think that would be categorized in the HR manual as “a big no-no,” though from the reports I’ve seen, the affair doesn’t seem to have been a factor in Strzok’s firing. Still, as investigative reporter Sara Carter has pointed out, he was working on the Russia desk, and there are national security risks to such an affair.

The FBI’s deputy director at the time, David Bowdich, fired Strzok over the recommendation of the FBI’s Office of Professional Responsibility (OPR), which had only suggested a demotion and short suspension. His reason for firing the 22-year FBI veteran: Strzok had undermined “the credibility of the FBI” with his text messages and exercised bad judgment in using an FBI device to send his personal texts. Right on both counts.

Strzok’s lawyers acted before Inspector General Horowitz’s potentially devastating report on the FBI’s handling of the “Trump/Russias” probe comes out, probably hoping for some kind of quick settlement along with publicity for … an upcoming book, perhaps? (Hey, even Andrew Weissmann’s got one.) Strzok’s legal expenses are being paid by others — a GoFundMe page has raised about $500,000 — so this is probably just free publicity and a chance to thumb his nose at those who found his actions reprehensible.

Speaking of fired FBI agents, Judicial Watch has obtained records on fourteen referrals of FBI employees to the OPR for the unauthorized disclosure (translation: leaking) of sensitive or classified information, out of which only four officials have so far lost their jobs. According to Tom Fitton of JW, some others were recommended for suspension, but that hasn’t happened, at least not yet. And there have been no criminal prosecutions of anyone for the leaking (or the lying), either. Not yet.

One referral (name redacted) apparently was for former deputy FBI Director Andrew “Andy’s office” McCabe, whose case was closed on March 18, 2018, with the recommendation that he be terminated, though the report also cited a mitigating factor: “Employee was facing unprecedented challengers and pressures.” Aw.

Oh, and to end on a laugh, here’s a link to Sidney Powell’s “Creeps On A Mission” website. (She’s Michael Flynn’s new attorney and knows all of Andrew Weissmann’s tricks.) Scroll down to “Meet the Creeps” and you can read about the major players: Mueller, Weissmann, Comey, McCabe, Lisa Page, Bruce Ohr and, yes, Peter Strzok. Fun and educational!