What if we could make America pro-family again and achieve genuine gender equality in the workplace? With new habits, we can. 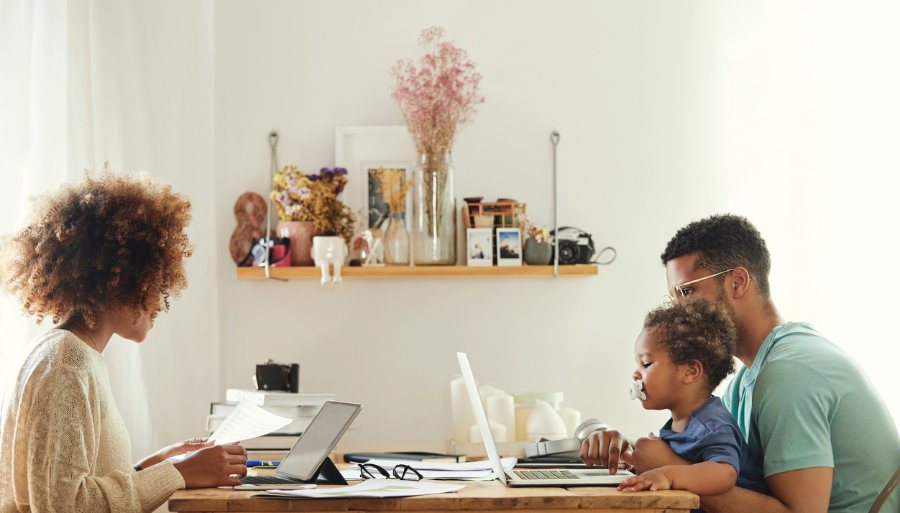 My boss can’t figure out Zoom. My baby screamed during my conference call. I’m sharing a workspace with a moody middle schooler.

We all have stories like these, or we’ve heard them. Many of the people lucky enough to still have jobs suddenly find themselves working from home. Such an unexpected adjustment comes with challenges. Even so, restructuring how we work could prove beneficial in the long run. It could even help accomplish two seemingly conflicting goals: making America more pro-life and pro-family, and helping women achieve genuine workplace equality.

Right Now, No One Wins

I’m a mom who works part time from home. I’m also a pro-life feminist, paradoxical as that may sound to some. Accordingly, I don’t view the goals of fostering a more family-friendly society and achieving better gender equality as contradictory. But I can see how one might.

For one, research is clear that a mother’s presence is key to early childhood development. Psychoanalyst Erica Komisar explores this in detail in her book Being There: Why Prioritizing Motherhood in the First Three Years Matters. Forget about the “three years” part, though. Few women in the United States have access to even a couple months of paid maternity leave, something Komisar laments. Even worse, many women feel pressured not to take the leave available to them. They fear being discriminated against upon their return. Saldy, that fear is not unfounded.

Often, career advancement means working within rigid schedules that are simply incompatible with family life. It means not making yourself a nuisance with “special” requests for maternity leave or flexibility. No wonder mainstream feminists argue abortion is essential for women’s equality. And no wonder many conservatives, valuing motherhood, aren’t particularly motivated to pursue policies aimed at such “equality.”

What if everyone is going about it all wrong?

In her book A Good Time to Be a Girl, British former finance CEO and mother-of-nine Helena Morrissey argues that “today’s ways of working are largely built around what made sense in the past, before we had technology, for a narrow group of people in a world where roles were clearly defined and when career paths were linear.”

“We now need to re-devise those working practices, so we can work more efficiently, more intelligently, more productively,” she goes on.

How Workplace Flexibility Can Benefit Moms, Dads, and Kids

Examining the pros and cons of working remotely in The Atlantic, writer Derek Thompson notes that one drawback is loneliness. Losing the sense of community that comes from sharing office space might not sting so bad if we found social fulfillment elsewhere in our communities — an idea I explore more here.

Are remote work and flexibility really effective from a business standpoint? There are plenty of opinions, but much of the research says yes. Moreover, research tells us that younger generations prefer workplace flexibility in order to better prioritize work-life balance. That includes men.

What would happen if companies stopped reserving flexible work options as perks for the chosen few? What if they made it the standard?

Women would clearly benefit. After all, many of the factors currently creating the children-versus-career dichotomy would disappear. Kids, who need their moms, would obviously benefit. But kids also need time with their dads. Research shows that higher levels of paternal involvement correspond with better outcomes for children. However, many dads bear the brunt of providing financially for their families at the expense of time with their families.

Evidence suggests Americans are overworked. That’s bad for families, health, and even productivity. Some jobs are by nature more demanding, “but constant pressure should not be a role requirement,” Morissey argues. “It certainly does not bring out the best in anyone, man or woman, and is unsustainable.”

The answer isn’t merely swapping roles in the name of giving women a turn to burnout at work. “We are now looking less at role reversal and more at sharing different aspects of what it takes to bring up a family, earn money, and develop careers,” Morissey writes. That sounds like something we can all get behind.

Some feminists dream of a 50/50 gender split in all fields and leadership positions. Conservatives point out that women are more likely to want to stay home with their kids. They’re also less likely to want certain jobs. That’s all true, but it doesn’t mean women don’t want careers at all. Pew Research Center finds that “most parents with children younger than 18 say it would be best for them personally to be employed, either full time or part time, at this point in their life.”

Among mothers specifically, “51% say it would be best for them to be working full time, 30% say part-time work would be best and 19% say the optimal arrangement for them would be not to work for pay at all right now.”

Importantly, women are good for business. Mainstream feminism recoils at the suggestion of male-female differences. But arguing that men and women are exactly the same is neither compelling nor true. Science shows that men and women are different. We generally have different social, emotional, and intellectual strengths. In short, we complement each other. One sex isn’t better than the other. But when the sexes work together, the result is better.

A Glimpse of the Future

The pro-choice left insists women can’t have a family and successfully contribute to the outside world. This reinforces a workplace norm that was never made to accommodate, let alone value, women for all that we are and all that we do. Conservatives tend to the downplay the importance — both to women and for society — of women working outside the home.

Changing the way we work isn’t the sole solution. But it’s a huge, critical step. The COVID-19 pandemic has presented the opportunity to take it. If we look past the bumps made by the urgent and unplanned nature of the shift, we could start to see what a more pro-life, family-friendly, empowered America looks like.

Hope for Life, From Our Nation’s Response to Coronavirus