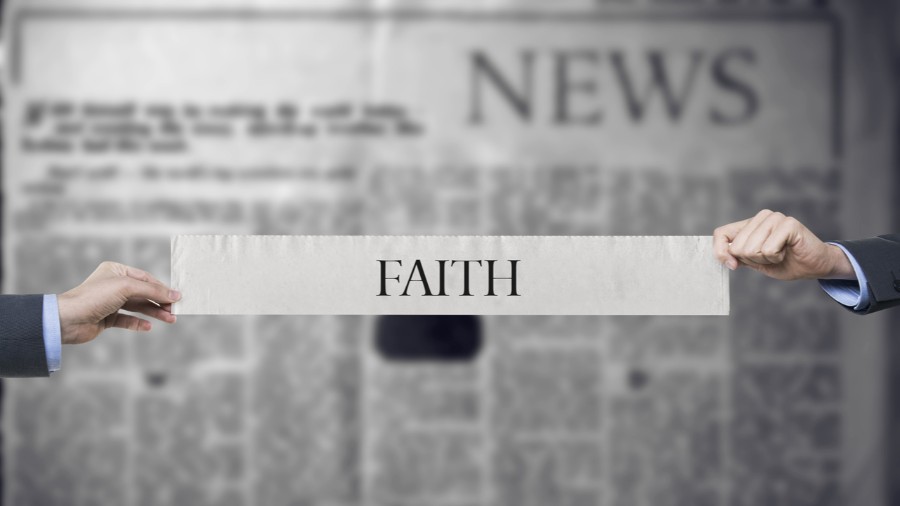 Why are American Christians afraid of a virus? The answer is sobering.

Scrolling through Facebook I happened upon a simple yet interesting post. One of the comments was even more intriguing. “Show me the verse in Scripture that says God heals everything but coronavirus.” A sharp-witted respondent typed: Matthew 13:58.

And he did not do many mighty works there, because of their unbelief. Matthew 13:58 (ESV)

That’s the sobering answer I alluded to. Instead of boldly standing in authoritative opposition to a wicked threat, the common reaction of so many of today’s American Christians seems to be unbelief.

Those who are to be driven by fearless faith are instead shaken by the winds of the world.

A lack of faith most certainly results in a lack of mighty works. Matthew 13 makes that clear. The preceding verse reveals the root of their unbelief: offense.

In our current crisis I’m stunned and saddened by the reaction of supposed Christians to the few who are rallying the troops to arise in faith and healing. These cries for the Church to confidently confront the spirit of the age and to believe without wavering in the healing power of Jesus are being met with resistance. How can that be?

Where did this man get all these things? That’s the question being asked by doubters when people of great faith proclaim the Word of God. Just who do you think you are? What type of hocus-pocus are you communicating? Don’t you realize how scary this virus is? Your lack of concern is foolish. Your so-called faith is dangerous to our nation’s health.

It’s true, we are living in a day when many in the Church are quicker to trust in science and medicine than in the Word of God. Facts trump faith in today’s secularized society.

A Test of Faith

It would do us well to learn from the test that King Asa failed.

In the thirty-ninth year of his reign Asa was diseased in his feet, and his disease became severe. Yet even in his disease he did not seek the LORD, but sought help from physicians. 2 Chronicles 16:12 (ESV)

The next verse displays very clearly what this strategy of healing results in:

And Asa slept with his fathers, dying in the forty-first year of his reign. 2 Chronicles 16:13 (ESV)

If we allow fear to drive us, we will have no choice but to defer to the physicians in our search for health and safety. Fear destroys faith. The only way we can approach God for healing or anything else is by faith.

Unfortunately, it’s obvious that many in the Church haven’t learned from King Asa. Calls to stand in confident faith are rejected as a nonsensical threat to their safety. What they don’t realize is a refusal to believe sets them up as easy targets of the enemy.

It truly is shocking that many Christians today don’t live in the supernatural realm that is so obvious in the Word of God.

As Believers, we have access to mind-boggling benefits that few take advantage of. In fact, many fully reject these spiritual realities. They become offended when faith-filled Christians challenge them. “Where did you get all these things?” is the question they ask. Where did you get these bizarre beliefs that are contrary to common sense?

The Bible. That’s the answer to their strange, humanistic question.

… He took our illnesses and bore our diseases. Matthew 8:17 (ESV)

The truth is that the blood of Jesus is sufficient for coronavirus. If we are afraid and default to human wisdom as we fight against it, we will lose. There will be no protection beyond what science can provide.

If we live as supernatural people and expect miracles and wonders to surround us, we will thrive no matter what plague may befall us. Healing, authority, power, freedom, joy and absolute victory are all ours as Believers! Fear, worry and defeat cannot stand against mighty, supernatural faith!

The Church should be sounding a universal proclamation that Jesus heals and that fear can’t stand! The world should be amazed and provoked by a joyful, fearless and faith-filled Church. Life for Christians is radically, wildly, supernaturally different than those who haven’t surrendered to the Lord. No weapon formed against us can prosper!

Instead, so much of the Church is nervous, afraid and campaigning for worldly potions, provision and protection.

Living in a Natural World

For though we walk in the flesh, we are not waging war according to the flesh. For the weapons of our warfare are not of the flesh but have divine power to destroy strongholds. We destroy arguments and every lofty opinion raised against the knowledge of God, and take every thought captive to obey Christ, 2 Corinthians 10:3-5 (ESV)

Wash your hands. Wear a mask if called for. Go to the doctor if needed. Do your due diligence. But don’t put your faith in such things.

Our faith is in the miraculous. It’s in the invisible wonders of a loving, omnipotent God.

Don’t get offended when someone challenges your response to the threat of a virus. Instead, admit your unbelief, repent and determine to live in a realm entirely different than where the world lives.

As Christians, we should be experiencing supernatural power and incredible miracles regularly. The authority we have over the enemy is extreme. The promises of God open up a world of wonder to all of us who walk in the mysterious realm of faith.

To think we are limited by science and human wisdom is silliness at best and blasphemous at worst.

It’s time for the supernatural, fearless Church to arise!

And without faith it is impossible to please him, for whoever would draw near to God must believe that he exists and that he rewards those who seek him. Hebrews 11:6 (ESV)

John is a sought-out teacher, prophetic messenger and revivalist. He has authored 10 books, is a regular contributor to Charisma Magazine, and directed one of the primary internships at the International House of Prayer (IHOP) in Kansas City. He has planted two churches and has initiated two city prayer movements and a school of ministry.