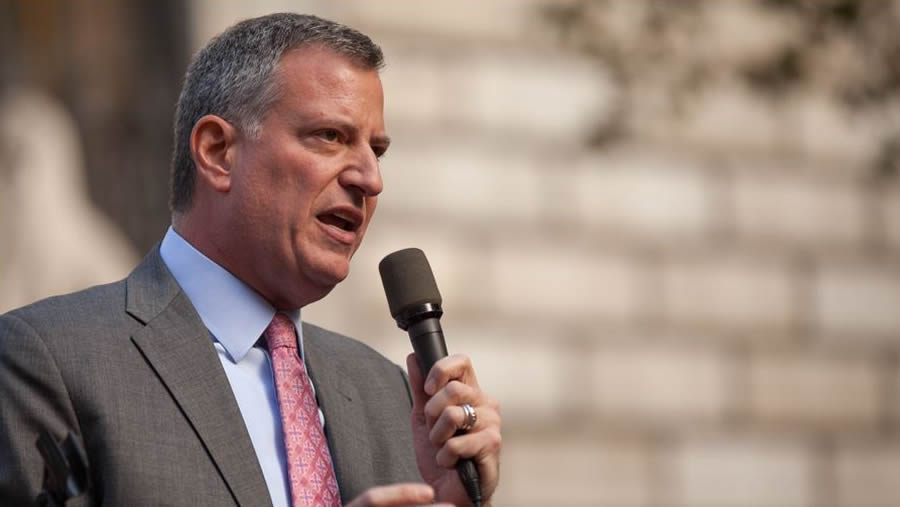 Barely two weeks ago, on December 12, Ben Shapiro wrote an article titled, “The Left’s Grotesque Politicization Of Anti-Semitism.” On Sunday, December 29, we were given a glaring example of this grotesque, leftist politicization of antisemitism. New York’s Mayor de Blasio blamed the Hanukkah stabbings on “hateful speech” emanating from Donald Trump.

During an interview on Fox News, de Blasio said, “An atmosphere of hate has been developing in this country over the last few years. A lot of it is emanating from Washington and it’s having an effect on all of us.”

Blaming Antisemitism on the President

When asked directly if he was pointing the blame at Trump, he replied, “not just the president,” adding, “we need a different tone, starting in Washington … that encourage this country to actually find some unity and some common ground.”

So, it is “not just the president” who is to blame for the recent spike in attacks on Jews, especially in greater New York. But the president, according to de Blasio, certainly shares some of the blame. (Note that CNN reported on Sunday, “There was an attack on Jewish New Yorkers almost every day last week.”)

After all, it was President Trump who, earlier this month, issued an executive order to combat antisemitism in America.

And it was Trump who undid our disastrous deal with Iran, thereby giving the nation of Israel a corporate sigh of relief.

And it was Trump who did what presidents Clinton, Bush, and Obama would not do, moving our embassy to Jerusalem.

And it is Trump who is the first president with a Jewish child or Jewish grandchildren.

So, of course he is partly responsible for the stabbing of ultra-Orthodox Jews at a Hanukkah party in Monsey, New York. Who could not connect the dots?

The Error of the Left Blaming Antisemitism on the Right

During an interview on MSNBC, de Blasio also pointed to the rise of white supremacist groups. He laid the blame for this on Trump as well. “But let’s be honest, he said, “the last three years everything has changed. Once hate gets normalized, it spreads like wildfire, and it takes a more violent form. And we’ve got to stop it now before we end up making the wrong kind of history.”

And how does the rise of white supremacy movements over the last three years explain blacks attacking white Jews? This happened both at the kosher market in Jersey City, New Jersey and at the Hanukkah party in Monsey.

As Shapiro noted, “the Left has been able to cover for its own anti-Semitism problem by focusing in on the rise of white supremacist violence, connecting that violence with President Trump.”

To be clear, I’m not saying that antisemitism is a black phenomenon. Far from it. The synagogue shooters in Pittsburgh and Poway were white nationalists. The Poway shooter professed to be a Christian as well.

The hatred of Jews is far more widespread and far more diabolical than to be blamed on one group or ethnicity.

But it is a real error when the left sees antisemitism as a problem on the right.

It is an even more serious error to blame President Trump when Jews are attacked by a machete-wielding intruder bent on murdering Jews. (Let’s not forget that the shooters in the Jersey City market allegedly had their sights on the Orthodox Jewish children studying nearby. Was that Trump’s fault too?)

Don’t Politicize Antisemitism. Confront It Wherever It Exists

Certainly, we must confront right-wing antisemitism wherever we find it. (According to the AJC Survey of American Jews on Antisemitism in America, 89% of those polled thought that “the extreme political right” posed a real antisemitic threat. In contrast, 64% felt the same about “the extreme political left.” Whether this is perception or reality is hard to determine with exactitude.)

And where we find it among professing Christians, we must confront it all the more forthrightly, since to hate the Jews is to deny the faith.

We cannot turn violent antisemitic attacks into a political football, to be tossed around for partisan gain.

But we cannot ignore left-wing antisemitism, especially on our campuses. (As noted by the FRC, “Most Americans would be mortified to learn that the colleges and universities to which they pay a king’s ransom have become safe havens for an increasingly noticeable anti-Semitism that has produced an environment of bullying, intimidation, and fear for Jewish students and academics. This newly minted anti-Semitism has entwined itself into the fabric of many educational institutions via a predominant multicultural ideology that pronounces Israel to be its enemy.”)

More importantly, we cannot turn violent antisemitic attacks into a political football, to be tossed around for partisan gain.

Mayor de Blasio, the blood is still fresh in Monsey, and two victims are fighting for their lives. Let’s put the blame, then, where it belongs: on demonically-inspired, irrational hatred of the Jews.

We can stand together to fight this evil. In fact, we must stand together, regardless of our ethnicity, our skin color or our political affiliation. Let us say with one voice as fellow-Americans, “Not on our watch!”