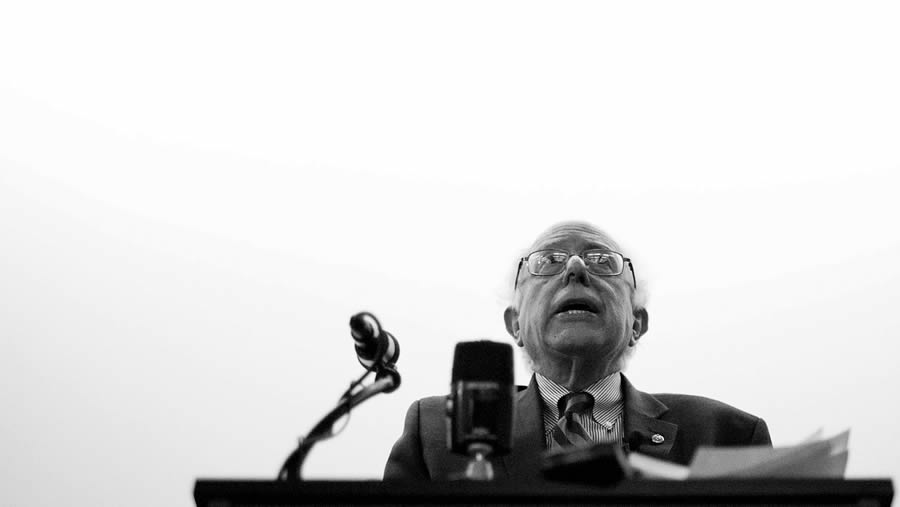 Some Democrats are worried about the rise of Bernie Sanders. James Carville is one. The political sex worker behind Bill Clinton’s “centrist” runs for president, Carville candidly called Sanders a “Communist” on Twitter. NeverTrump Republicans, who barely fill the Acela Quiet Car, have harrumphed their mounting concern. Some mutter that Sanders is the only Democrat they couldn’t support against Donald Trump. (Think that through long and hard, and thank God these people aren’t running the GOP anymore.) When embittered political hacks in a movement fueled by personal hatred and vengeance can’t swallow something like Bernie, that tells you something, doesn’t it?

No. It actually doesn’t. Neither James Carville nor NeverTrumpers have ever met a political principle.

That’s it, there’s no further punchline. They simply haven’t encountered one, so we don’t know how they’d react. I suspect they’d find it puzzling and repulsive, but we’ll probably never know. Carville just wants access to money and power. The NeverTrumpers, by contrast, want access to power and money. Neither group can fathom the appeal of a candidate who is so moved by principles that he’s actually a fanatic. One whose principles bubble up into passion. A passion that proves contagious, and can set loose angry mobs.

Does it matter that his principles are simple, false, and nasty? Yes, it does. It helps that candidate, since folly draws more folks than wisdom, as plates of free Twinkies vanish faster than piles of Brussels Sprouts.

Which is easier to sell: The promise of free stuff taken from strangers, or the prospect of sober, hard work? Which one is easier to summon, resentment or forgiveness?

The same folks who rigged the primaries in 2016 to favor Hillary Clinton over Sanders are still at work today. (Hence the East German transparency of last week’s Iowa caucuses.) But the “Bernie bros” are wise to their tricks. What’s more, they have a killing argument in their quiver. “Last time you told us we had to nominate the boring, sold-out hack, or Trump might win. How’d that work out for us, huh?”

Will the fevered fans of Sanders roll over and let “pragmatists” steal the nomination again, to foist on angry, resentful Democrats a small-town cipher like Buttigieg? A haughty former Republican frisker-in-chief of urban youths like Bloomberg? A grating nebbish like Klobuchar, who recalls nothing else but one of Jerry’s insufferable, short-term girlfriends from the glory days of Seinfeld?

Which is easier to sell: The promise of free stuff taken from strangers, or the prospect of sober, hard work?

I certainly hope so. Because President Trump would beat any one of them. Beat them big, not in a squeaker like last time, but in a world-changing realignment that gives us back full control of Congress. Our media and elites have spent the past three years drumming into Democrats’ heads the idea that the U.S. has been under Nazi occupation. (Why else call themselves the “Resistance”?) You don’t do that incessantly just to whip up the troops at the moment of crisis to be led by … a marble-mouthed hall monitor who waves around his resume. Not if you want to win.

The Democrats’ narrative, malicious and false, has been admirably consistent. Donald Trump is a racist who enables literal Nazis. He arouses plenty of passionate support because racism and bigotry run deep in this wicked country, and have since its very settlement starting in 1619. We must remove him from office by any means — even, as a last resort, via a democratic election.

That’s a heady brew. The left has been drinking deeply, and knocking over the furniture. Now that the chance has finally come to throw out “racists and fascists,” don’t expect them to settle for Boy Scouts and former student council presidents. They want a revolution, don’t you see? For years the most respectable media and institutions have been telling them that’s what’s needed. Now when their chance is in sight, do you think they’ll settle for some bland Kerensky, when Lenin has come on the scene?

Sure, some conservatives say. But nominating Sanders would “expose” the left’s real agenda. It would force Americans to face the prospect of Jeremy Corbyn-style socialism. Proposing Sanders as the alternative would make social liberals think twice about the fate of their 401ks. They might hesitate, and stay home.

“The Worse Things Get, the Better It Is”

That ship has sailed, my friends. It sailed, hit an iceberg, and drowned Leonardo di Caprio. Democrats of every shade have convinced themselves that Donald Trump and his backers are evil. The administration of Yale is willing to deny its students courses on Greek and Roman art, because someone claimed that it’s “racist.” Transgender ideology went from curiosity to dogma within just past three years.

The crackpot claim that climate change will make the earth uninhabitable minus massive state control over all our lives? It serves as the Apocalypse of a new fanatical creed. The righteous have gathered behind their ascetic, wild-eyed prophet. After decades in the wilderness, he strides now toward Babylon, ready to tear down its walls and despoil its inhabitants. Even those with rational doubts will mostly fall in behind him, herd animals that they are.

There’s an old political saying, “The worse things get, the better it is.” That theory asserts that you want your enemy’s most radical wing to take control, to alienate the masses and turn people towards you.

That saying is wrong. Dead wrong. It’s what German Communists said, as they hoped for Hitler to beat out both “bourgeois” leftists and conservatives. They had plenty of time to reassess that, in the concentration camps where he promptly put them.

Remember all the Democrat-leaning media who boosted candidate Trump as he sought the primaries, convinced that he couldn’t win? (They pretended to believe he was a genuine extremist, which of course he wasn’t.) Remember the looks on those same journalists’ faces at 10 pm, Eastern Time on election night, 2016?

We’ll be seeing that same look in the mirror if Sanders wins the nomination. Because he’s the only thing the left has that could beat Donald Trump.

Trump was never anything like his media caricature of an extremist. But Sanders is the real deal. When it came out that his field organizer in Iowa fantasizes about shooting reporters and locking rich Americans in gulag camps, Sanders didn’t fire him. Didn’t even denounce him. For all we know, he sent the guy a case of Ben and Jerry’s. Imagine a Trump employee using murderous rhetoric about … illegal immigrants. Trump would rightly have thrown him under the bus within 15 minutes. Not Sanders. He doesn’t want to rid his campaign of people like that. Their hatred and envy are the fuel Sanders needs to win.

Don’t underestimate dark passions in politics. They goaded the French Revolution, and the Russian Revolution, and the Klan-led lynchings that stained America with blood for many decades. We’re not immune now from such evil. In fact, I’d say that we’re just seven months, and one election, away.

John Zmirak is a Senior Editor of The Stream, and author of the Politically Incorrect Guide to Catholicism.