Now we know what StemExpress was so worried about: their May 22, 2015 conversation with the Center for Medical Progress is out, and it's damning. 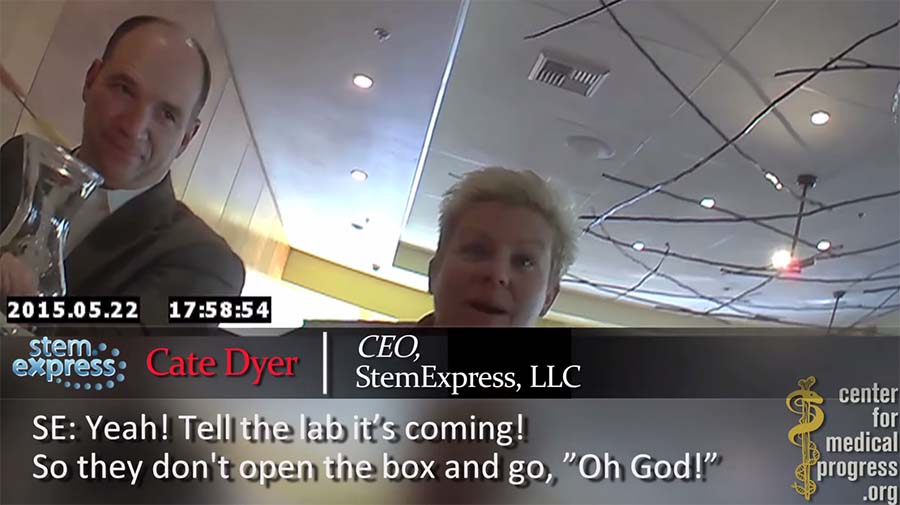 Today the Center for Medical Progress (CMP) released video of an undercover lunch conversation with the CEO of fetal-tissue distributor StemExpress. This is the video footage that StemExpress tried to stop CMP from releasing by going to the courts in California. The temporary restraining order StemExpress filed against the Center for Medical Progress was dissolved on Friday, making this video one of the most anticipated — and possibly one of the most damaging.

The video contains several admissions by Cate Dyer, StemExpress CEO, that StemExpress gets intact fetuses from the abortion clinics they work with shipped to their laboratory. From the transcript:

Dyer: Realistically, if we were to do an agreement with you, what do we think you could get?
Buyer: Volume-wise?
Dyer: On specifically liver tissue, because that’s such an area of demand for us.
Buyer: So liver, and what about intact specimens, just—?
Dyer: Oh, yeah, I mean if you had intact cases, which we’ve done a lot, we sometimes ship those back to our lab in its entirety.
Buyer: Okay.
Dyer: So that would also be great if you guys have those.
Buyer: The entire case.
Dyer: Yeah, yeah. Because it’s just, and the procurement for us, I mean it can go really sideways, depending on the facility, and then our samples are destroyed, and we’re like, “Really?” This was all so much work, and then just to have them be destroyed is awful. I mean we have researchers wait forever, and they want certain things, you know, perfectly done, so we started bringing them back even to manage it from a procurement expert standpoint.

One of the investigators asks, “What goes wrong? Tell me what goes wrong that you think you’re getting something and it doesn’t come through.”

Dyer: “I think for us, you know, on the liver tissue, focusing to that piece, at least, we’ve seen like doctors provide blood clots, you know, ‘Oh yeah, we’ve got a liver.’ And they think it’s a liver. And it’s a blood clot. So, you know, we’ve seen plenty of those, and we can always tell right away because it’s just red water by the time it gets to us.”

Dyer: “Yeah, and there’s just so much, too, contamination-wise, is another big issue. So you know, we’ve seen all sorts of things, but yeast contamination, that can be an issue. You know, we have a number of quality checks we have to go through with things internally, just to make sure we’re not investing a bunch of money into trying to isolate cells just to find out they’re contaminated.”

Dyer continues, with even more serious claims and an implication that Planned Parenthood clinics may be unsafe for women. “And sometimes you find that it can be clinic-specific. I’ve seen really rampant, rampant problems with bacteria in certain clinics. Some where you’re kind of like in question of really, should they really, you know — I’ve seen staph [infection] come out of clinics. So, I mean, I’ve seen all sorts of things come out of clinics.”

What Dyer implies is that these clinics are not sanitary and may be harming the women they serve.

Dyer then mentions the size of the potential deal with the procurement company. They respond by asking, “What would keep your lab happy?”

Buyer: “So you can handle that?”

Dyer: “Yeah, I mean it’s, you know, volume for us. And just so you guys know, too, on the collection side for us, we’re also, as you see Megan out there in the clinics, right, we’re working with almost like triple digit number clinics. So it’s a lot on volume. And we still need more than what we do. So it’s a lot.”

This industrial-strength profit motive is  the driving force behind harvesting baby body parts at Planned Parenthood. It has a friendly face, really, but it’s got only one goal: volume. Human organs on an industrial scale. That is: concern for the bottom line, which Dyer is quick to bring up: “Do you feel like there’s clinics out there that have been burnt, that feel like they’re doing all this work for research and it hasn’t been profitable for them? … Oh, okay, good. I was going to say I don’t see that, either.”

This is a clear admission that Planned Parenthood affiliates are profiting from selling these aborted baby parts.

But the problems with sensitive baby body parts are many, and waste, even when you’re working on such a large scale, is costly. Here’s Dyer again: “I think that one of the issues with neural tissue, it’s so fragile. It’s insanely fragile. … I know we get requests for neural — it’s the hardest thing in the world to ship.”

So StemExpress ships whole baby heads to researchers. When some researchers express disgust with receiving baby body parts in the mail, StemExpress’s Dyer laughs. “It’s almost like they don’t want to know where it comes from. I can see that.”

But we know where the “intact calvarium” — the whole baby’s head — comes from. It comes from the child who was just killed in the womb, or maybe just outside of it. The child whose face is mutilated for the sake of its valuable brain tissue.

Dyer’s perspective on getting neural tissue to the labs is consistent. After all, StemExpress sees the children they use as valuable for research when they are “intact cases,” even though these are most obviously fully human beings. Dyer frowns at the academic research labs that only want the parts without having to face where the parts came from.

Just as the lab technician at Planned Parenthood showed the child being dissected as “it’s a baby … it’s another boy!” so also Dyer cannot deny the truth: “But we know what it is.”

Lord have mercy on the lab techs Dyer describes “having freakouts and meltdowns” upon receiving the baby cadavers. They can’t unsee or forget the truth, either.

The proof is in the video: Planned Parenthood is harvesting children from their mothers’ wombs and selling their bodies to StemExpress and other “tissue procurement” companies, who will then sell these baby body parts to researchers at retail markup. While StemExpress has quietly severed ties with Planned Parenthood, with profit margins like these we can only assume that other companies eager to traffic human organs will take their place. Unless something changes, this systematic slaughter “is going to continue to grow.”

Stay tuned to The Stream for continuing coverage of this story.