Racial Harmony: What I’m Learning Being in an Interracial Relationship 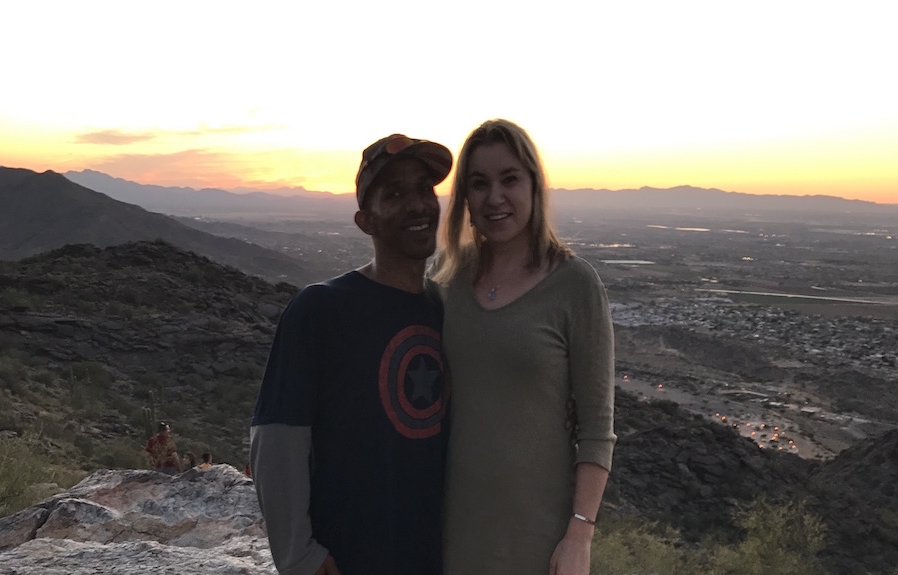 When Afro-centric activists preach that blacks should only marry other blacks, my boyfriend Kevin says, “But then my parents wouldn’t have gotten together, wouldn’t still be together, and they wouldn’t have had me.” He thinks the same of white nationalists. They want different races to live in different countries. That would separate his parents, and it would also separate me and him.

He grew up in Rockford, Illinois, where over 20 percent of the population is black. His name is Kevin, but he goes by KP. His father is black and his mother is white, so he identifies with both.

KP’s father was raised in the projects outside of Chicago. He wanted better for himself so he became a police officer and teacher. He instilled those hard working values in his four children. KP and his younger brother both served in the military. He played baseball in college. In high school, he brought home all the Presidential Fitness awards.

Fortunately we have similar politics, so there is little friction there. But KP does see some things very differently than I see them, because his experience has been so different.

For example, he has a different opinion of the police than I do. He thinks police brutality is a serious problem for blacks. I try to convince him that many of the incidents were told incorrectly to make them sound worse. And the ones that were legitimately tragic involved a handful of bad or incompetent police officers and cannot be used to tarnish all police. I also point out how there are similar tragic circumstances involving whites, and many of the incidents involved black police officers.

He thinks police brutality is a serious problem for blacks.

His experience does differ from mine. KP went to the bank one day to fix an erroneous charge to his account. He told me, “I put on my white guy voice to handle it.” He believes he gets treated better if he talks differently. I think his “white guy voice” simply sounds nerdy.

When we go grocery shopping, people give KP a slightly wider berth than others I’ve gone shopping with. People stereotype him. On a trip to Florida, a man came up to him in a nightclub and asked him if he knew where to get hard drugs. I’ve never been with anyone before who encountered that.

When he walks past another black man, they nod at each other. Black folks selling things in parking lots come rushing up to him and he generally buys something from them. When I suggested that two young men seemed rather shady, he responded, “Better they’re out here selling candy bars than dealing drugs.”

When we go places I’m now hyper aware of the fact that KP is often the only black person in the room. We are a lightening rod for attention because we stand out as a mixed couple. So far I have not experienced any racism or negativity. Most people are genuinely interested in us.

Our cultures are different as well, and I’ve learned to enjoy things I wouldn’t have looked at otherwise. In the car, he always turns the station to R&B or hip-hop. He knows all the words. When Kanye West spoke out in favor of President Trump and conservative activist Candace Owens, he introduced me to Kanye’s music.

He’s seen every movie with Denzel Washington in it and all the major movies featuring black actors. KP told me I need to see all those movies if he’s going to take me home and introduce me around the hood. He recommends Ice Cube’s “Friday” movie series for an education about the hood. He watches sports shows nonstop. I’ve actually learned quite a bit about professional football and basketball, especially regarding Lebron James.

I’ve actually learned quite a bit about professional football and basketball, especially regarding Lebron James.

The main thing I’ve learned from KP is that he doesn’t want to constantly be reminded of his race. He wants to be treated equally like everyone else. Other people may not realize this and try to talk about race with him more often than he’d like. Since it’s only one part of who he is, he doesn’t want constant reminders in conversation that he’s black.

Most importantly of all, he’s a Christian. We may look like opposites, but we’re equally yoked. And my positive experience gives me hope that race relations aren’t as bad as the naysayers make out.

How did I meet him? By moving. When he first jumped out of the moving truck, he had a big grin on his face when he saw me. Once he got my phone number, he deliberately waited exactly 36 hours before texting me. I now tell single women to hire movers if they want to meet eligible men.