America's pastime is embroiled in a bitter lockout that is poised to delay 2022 Spring Training. 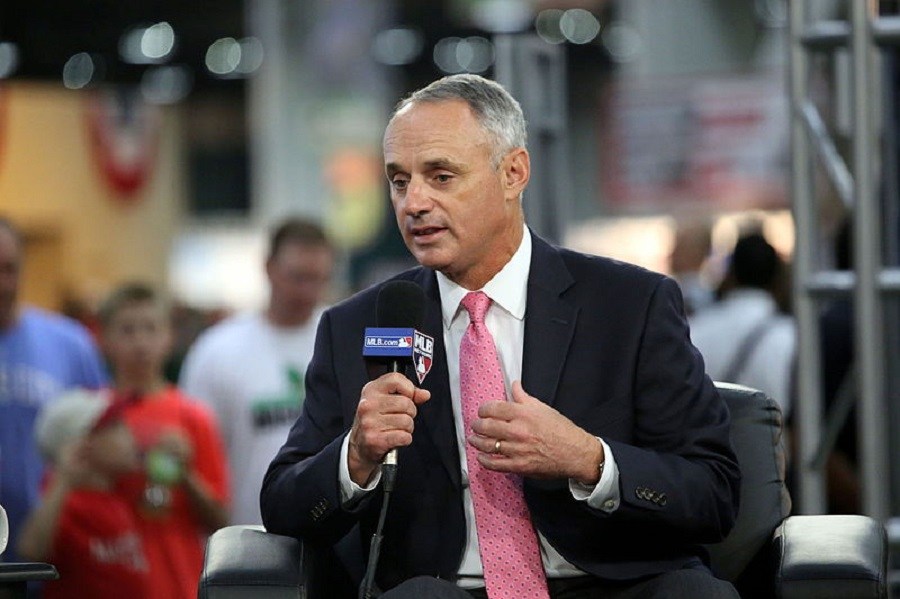 MLB commissioner Rob Manfred embarrassed himself and his sport during a disastrous press conference focused on the ongoing owner-imposed lockout of his league’s players.

The embattled commissioner’s awkward jokes and forced smiles in Orlando on Thursday couldn’t hide the lies and spin that have caused what is essentially Major League Baseball’s second work stoppage in three years. The biggest whopper told by Manfred might have been that MLB players bear equal responsibility for the 42 days of virtual silence that followed the owners locking them out on December 2.

As I wrote the day the lockout began, “a letter announcing the MLB lockout by Manfred was filled with half-truths and outright falsehoods, including a lie about the league’s owners being ‘forced to commence a lockout of Major League players.'” Nine weeks later, Manfred’s dishonesty continued when he said that “the status of spring training is no change right now.”

MLB Commissioner Rob Manfred: “The status of spring training is no change right now… I’m an optimist, and I believe we will have an agreement in time to play our regular-season schedule.” pic.twitter.com/1om326VqrP

Manfred’s claim, which was dutifully tweeted by numerous MLB “insiders” who resemble league spokespersons more than objective journalists, is almost certainly false. As this CBS Sports article explained earlier this month, “it’s not like MLB and the MLBPA can reach a deal, then everyone shows up to spring training the next day. Even ignoring free agency and trades, teams will need time to wrap up their offseason business.”

With pitchers and catchers originally scheduled to report to camp next week, a delay of spring training seems inevitable. Manfred, the owners and their media enablers know that, yet are waiting as long as possible to make a formal announcement in order to encourage fans to keep buying tickets to both exhibition and regular season games.

Sorry MLB, but this diehard baseball fan no longer believes your lies. Last month, I declined to renew the Washington Nationals spring training season tickets I’ve had since the West Palm Beach, Florida, stadium they share with the Houston Astros opened in 2017. I am not giving one more dime of my hard-earned money to this league unless and until this lockout ends and encourage fellow fans to join me in voting with their wallets.

Like almost all baseball fans here in Florida and Arizona, the thought of a delayed or cancelled spring training is devastating. The same can be said for the legions of MLB fans who travel great distances each spring to relax in the sunshine and watch their favorite teams prepare for an upcoming season.

The people who will suffer most this spring aren’t fans like me, but the stadium workers and vendors who depend on seasonal spring training income to support their families. As of this writing, these hard-working folks don’t know if or when their jobs will start this year. Manfred and the greedy owners he represents are despicably using these hard-working people as pawns in their ongoing efforts to strongarm players.

Last week, I put out a tweet that attempted to summarize Manfred’s bumbling incompetence since the conclusion of the 2019 World Series.

Rob Manfred since the 2019 World Series:

How does Rob Manfred still have a job after a huge cheating scandal, a train wreck 2020 “season” and the current lockout? If there a scientific poll gauging the MLB commissioner’s approval rating, it would likely be lower than President Richard Nixon’s in the last days of Watergate. Despite being almost universally hated by baseball fans, Manfred remains in office largely due to the support of the greedy owners he represents and a largely compliant MLB media.

If Manfred had a shred of decency, he would immediately resign and apologize for the lasting damage he and the owners have done to America’s pastime. Instead, the commissioner will stumble ahead and probably even receive praise like during ESPN’s embarrassing opening night telecast after the failed labor negotiations that led to Manfred imposing a comical 60-game MLB “season.”

The bottom line is this: baseball is a beautiful game that millions of Americans still love. Major League Baseball under Rob Manfred’s dishonest and disgraceful leadership, however, is an ugly mess. Until Manfred resigns or is voted out of office, the sport’s credibility and popularity will continue to plunge.

I was really looking forward to taking my two daughters to several baseball games in West Palm Beach this February and March. Instead of ballparks full of smiling children, however, there will be locks on spring training stadium gates in Florida and Arizona for at least a few more weeks.

Shame on you, Rob Manfred and MLB owners, for imposing this pathetic and pointless lockout. You better be careful, because this time around, a significant number of baseball fans might not come back.