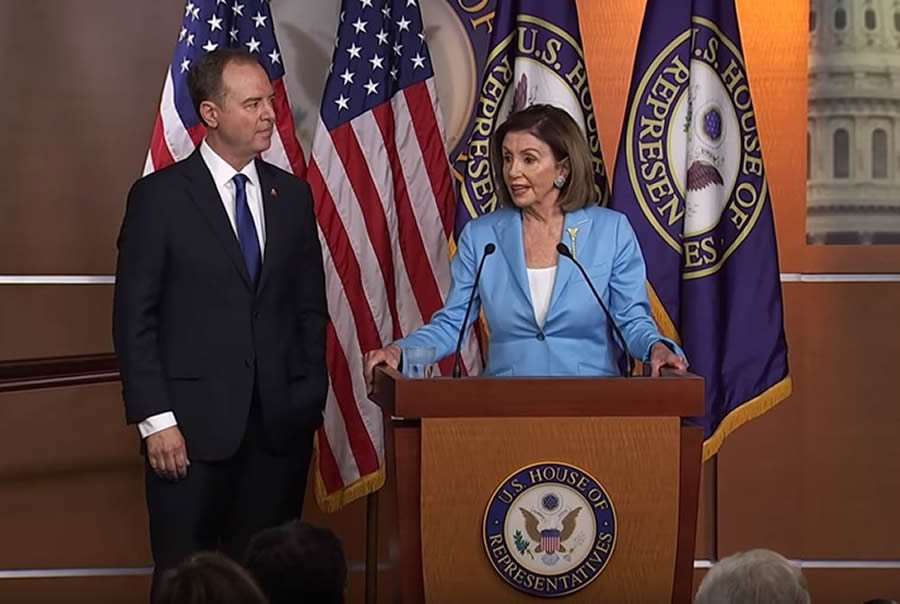 I read the six-page letter sent to you by President Trump on the eve of his impeachment and thought that as long as letters are flying around, I would send you one myself, just as someone trying to help.

The biggest question for you now is what to do next as you contemplate what action might be taken in the Senate. Your follow-up strategy is very important, I know, to your goal of damaging the President as much as possible before the 2020 election. But right now you and your Democrat colleagues are busy celebrating — behind closed doors, of course — and it’s hard for people who are giddy with merriment and even perhaps a bit hung over to chart their next steps. (You’ve tried your best to look somber and be discreet about the celebrations, but some news accounts have slipped out. You know how it is with leaks.)

The impeachment of President Trump is your long-awaited Christmas gift to yourselves, and now that you have finally unwrapped it, you naturally want to play with it a while. Goodness, you’ve worked so hard and have come so far. And you must all be very proud of yourselves, considering you got this done completely on your own, with not one single vote from the Republican side. Who needs those Republicans, right? You made up your own rules and accomplished the deed all by yourselves.

You worked and planned for this, and only this, literally for years. You were single-minded. You did it. You own this.

But now it’s time for the Senate to take it on. And I just read in The Daily Caller that you are “leaving open” the possibility of withholding the articles of impeachment from Senate Majority Leader Mitch McConnell until you are “assured a fair trial in the Senate.” You said that, so far, you haven’t seen anything that looks fair to you. You’ve apparently suggested to reporters that you plan to hold up the impeachment process.

Wow, what an idea! You get to put the “black mark” of impeachment by President Trump’s name, after railroading him in Adam Schiff’s kangaroo court. And then, for as long as the Senate has to wait to dismiss the charges or have their trial, those charges, vague as they are, continue to officially hang over him. You, of course, use those charges to try to discredit any appointments or other Presidential actions.

The founding fathers never intended something like this, and we know how much you respect the founding fathers because you mention that so often, but, hey, the founders would surely understand if they knew President Trump was really an agent of Russia, right? Of course they would. They would no doubt give their blessing to anything you did under these unique circumstances.

Anyway, you’ve said you think the President is “goading” you to come after him because he thinks it will “fire up his base.” And, my goodness, I see that you really are playing along. I understand you are still sending out congressional subpoenas to certain prospective witnesses that you didn’t have time to include in Schiff’s proceedings, as you needed to rush through impeachment by Christmas so you could open your present and “ooh” and “ahh.”

You didn’t have time for the court challenge from Trump that would have had to go before a judge (who might have ruled against you), so you just labeled the exercise of his constitutional rights as “obstruction” and forged ahead. As a result, even though you’ve already presented your case for impeachment and voted on it, you’re still working on investigations of Trump, plus his close allies and cabinet members, in three committees: Intelligence, Oversight and Foreign Affairs. It just never ends.

How diligent of you to continue building a case against the President even after your part is supposed to be done. This must be why you want to keep calling witnesses even in the Senate. That wish is certainly understandable, Madame Speaker, considering you have no actual evidence at all at this point. It simply isn’t fair for them to require you to make do with the evidence you have — hearsay and gossip and presumption that wouldn’t even be allowed in a court of law. Goodness, how unfair it would be for the Senate to refuse to allow you to continue digging until you finally found something. And we know how deeply concerned you are with basic fairness.

So let me get to the point of this letter. I have a helpful suggestion for you that will give you the fairness you crave, and I think Sen. McConnell might be persuaded to go along with the idea. To make sure the process is scrupulously fair, here’s what you do:  just have him follow exactly the same rules in the Senate that Adam Schiff did in the House. There you go, fairness!

This is how it will work: Sen. McConnell gets to make up the rules he wants, just as Schiff did. And being in the majority (as you were in the House), the Republicans vote straight party-line to approve them. Since you are the minority, you don’t get to call witnesses, but they do, and the witnesses can offer any “evidence” they want. You can ask questions — that’s only fair — but only the ones McConnell approves. The Senate majority has the option to dismiss the charges, of course, or it can subpoena Adam Schiff, his staff, Eric Ciaramella (alias “the whistleblower”), Hunter Biden, Joe Biden (after all, just because he’s running for President, he doesn’t have immunity), and numerous others. Maybe even Ukrainian President Zelensky would like to come testify — no quid pro quo involved.

That would be fair. After the way you treated the House Republicans, the slightest concession you get from the Senate should be considered gravy. And withholding the articles of impeachment is not going to help you, Madame Speaker, as it will just make you folks look more pathetic than you already do, if that is possible. This is one Christmas present you might be sorry you asked for.

PS. Rep. Collins also said this; I thought you might appreciate it: “The funny thing about obstruction, any time the Democrats get caught trying to frame this President for some crime he didn’t commit, they follow up by accusing him of obstructing their efforts to frame him for the things he never did in the first place.”