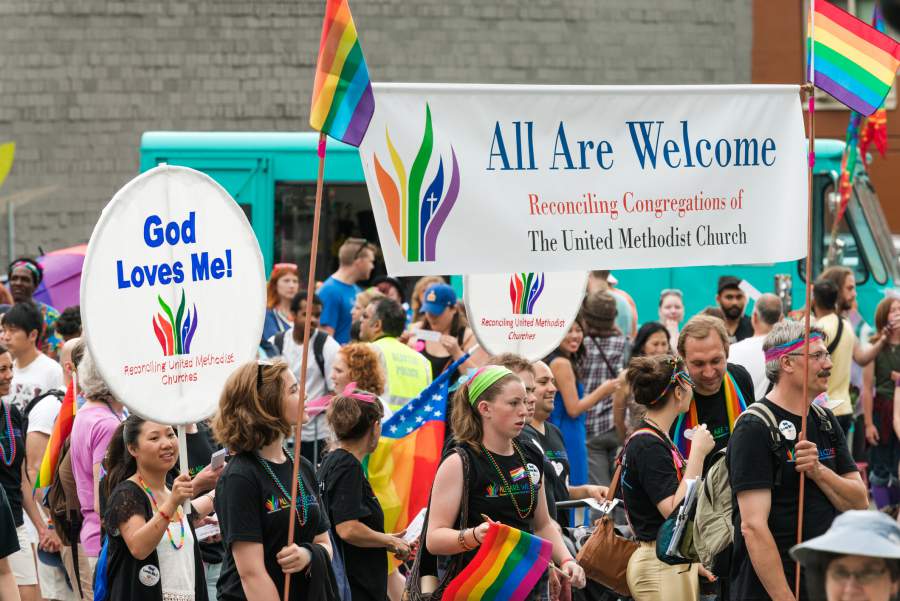 The United Methodist Church has voted to affirm what the Bible has taught since Moses wrote Genesis: that marriage is an institution ordained by God and is composed of one man and one woman. Christians who believe the Bible matters can rejoice.

Supporters of endorsing same-sex marriage and allowing practicing homosexuals to serve as ministers in the denomination were quick to attack. Viciously.

“As someone who left because I’m gay, I’m waiting for the church I love to stop bringing more hate,” said former Methodist pastor Rebecca Wilson said. “If we bring this virus into our church, it will bring illness to us all,” according to Rev. Thomas Berlin of Herndon, Virginia. The Bible’s teaching is now a “virus”? This is breathtaking.

“I will not participate in your bigotry, sin & violence,” proclaimed Allen Ewing-Merrill, a pastor from Portland, Maine.

“The United Methodist Church failed Tuesday to love LGBTQIA people … and to live out our Gospel mandate to seek justice and pursue peace,” wrote General Secretary Susan Henry-Crowe of the church’s General Board of Church and Society. The “punitive” vote “brought unbearable pain to the body of Christ.” She essentially pledged to use her agency to oppose it.

The proponents of radical departures from historic Judeo-Christian teaching on sexuality wear their woundedness on their sleeves. Their identity is more wrapped up in their sexuality than in the Savior they profess. They cannot make arguments calmly or allow their opponents any grace.

The insistent minority — almost entirely North American — demands acceptance of all manner of sexual behavior in the name of justice, peace, love, diversity and so forth. From what I have seen, they have not offered any serious exposition of the biblical texts that address marriage and sexuality. They call names and use words like “inclusive” to foster indignation among the uninformed. They asperse — in the harshest terms — anyone who disagrees with them.

These activists must win. They must have external affirmation of their decision to abandon the Bible. The Bible they solemnly endorse when they become members of the United Methodist Church.

If there’s any fly in the ointment of United Methodist vote, it’s that the American branch of this denomination has for far too long tolerated having openly gay and lesbian clergy. These men and women violate not only Scripture but the explicitly stated convictions of their own church.

“The Bible is sacred canon for Christian people, formally acknowledged as such by historic ecumenical councils of the church,” according to the Methodist Book of Discipline. Indeed, “the Word of God [is composed of] the words of human beings inspired by the Holy Spirit.”

In a gracious but uncompromising message given in St. Louis this past Saturday, Dr. Jerry P. Kulah offered a profound rebuke to those who are insisting their church move away from God’s standards. He’s the dean of Gbarnga School of Theology, part of the United Methodist University in Liberia. Given the Gospel power of his statement, I quote him at length:

We Africans are not afraid of our sisters and brothers who identify as lesbian, gay, bi-sexual, transgendered, questioning, or queer. We love them and we hope the best for them. But we know of no compelling arguments for forsaking our church’s understanding of Scripture and the teachings of the church universal.

And then please hear me when I say as graciously as I can: we Africans are not children in need of western enlightenment when it comes to the church’s sexual ethics. We do not need to hear a progressive U.S. bishop lecture us about our need to ‘grow up.’ Let me assure you, we Africans, whether we have liked it or not, have had to engage in this debate for many years now. We stand with the global church, not a culturally liberal church elite in the U.S.

He’s right. We must choose. The choice is a stark one: Accept what the inspired text teaches or reject it. Stand with the global Church or with the American liberal elite.

Liberals, quit trying to rationalize away things you dislike. That’s the mandate of Scripture and its God for all believers, however discomfiting or mysterious some of its teachings might be.

He is God. And He is good. The Methodist Church has, by a slim margin, just affirmed that. For that, we can give the Lord of the Church praise.