Mark Levin’s Unfreedom of the Press 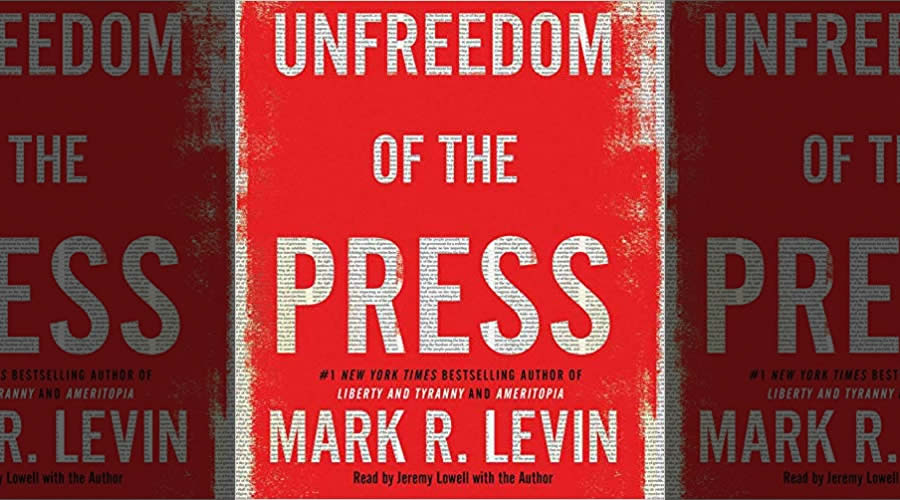 With his latest blockbuster, Unfreedom of the Press, Mark Levin presents a unique indictment of the liberal media today — something I doubted could be done, given the plethora of material already written on this subject.

It is sweepingly comprehensive, covering the history of the American press from before the nation’s founding through modern times, yet accessibly succinct — 226 pages, excluding the acknowledgments and notes.

It is tough on the mainstream media but is anything but a ranting screed. A passionate patriot, Levin says this book’s purpose “is to jump-start a long-overdue and hopefully productive dialogue among the American citizenry on how best to deal with the complicated and complex issue of the media’s collapsing role as a bulwark of liberty, the civil society, and republicanism …”

With his formidable background in constitutional law and history, Levin provides a fascinating tour of the American free press, from its indispensable role in the establishment of this republic, to its evolution through various phases that culminate in an ideologically possessed institution that is firmly aligned with one political party and is mostly hostile to America’s founding principles.

The media’s alliance with a political party (the Democratic Party) is not the first time we’ve seen this phenomenon in our history. Levin notes that from the 1780s to the 1860s (the party-press era), most newspapers aligned themselves with a politician, a campaign or a political party. But there were at least two critically important differences.

During the party-press era, “newspapers lined up fairly evenly behind one party or the other or one candidate or the other,” so balanced competition alone served as a safeguard against manipulation of the citizenry by a monolithic media. Also, and perhaps more important, newspapers “transparently proclaimed their partisanship.”

The Denials of the Liberal Media

Today’s liberal media are wholly in the tank for the Democratic Party, but they steadfastly deny it, which facilitates their ability to deceive and indoctrinate the public. They are not on the party’s payroll or subsidized by it, as some of yesterday’s newspapers and journalists were, but today there is no denying “the revolving door of journalists and/or their family members serving primarily in Democratic administrations, Democratic congressional offices, and Democratic campaigns — and vice versa.”

Levin traces the notion of objectivity in reporting to the Progressive Era in the early 1920s when the “scientific approach to journalism” spread through newsrooms. Journalists were urged to adopt objectivity by developing a consistent method of testing information so that personal and cultural biases would not undermine the accuracy of their reporting.

Whether there was ever an era when journalists pursued objective truth, by the 1950s, the media began to abandon that goal in favor of “interpretive reporting” through their progressive lenses. They don’t even try to separate fact from opinion anymore; rather, they infuse every aspect of the profession with their liberal biases, including the selection, gathering and reporting of the news. There is no ideological or intellectual diversity in their newsrooms. They’re all in disgraceful lockstep.

The media are so ensconced in the progressive worldview that it’s sometimes difficult to tell whether they are intentionally deluding the public or deluding themselves — as they are convinced that their biased reporting meets their warped standard of objectivity. If you believe that only one political viewpoint is worthy of airing (because all other viewpoints are objectively sinister and dangerous), then you might, in a twisted way, think you are being objective by reporting only one side.

Besides, today’s self-righteous liberal media elites have graduated from such trifling concerns as pursuing objective standards, while pretending to adhere to them. They have fully embraced the philosophy of progressive intellectual John Dewey, that the Progressive Movement must not squander “the most important tool of mass communication for advancing its ideological program — a radical break from America’s heritage, culture, and founding, particularly the principle of individual freedom and market capitalism.” In other words, progressives must commandeer the media and enlist their key players and soldiers to harness the incomparable power their positions afford them, engage in full-throated activism and fundamentally transform America.

Today’s media would make Dewey proud. The purpose of a free press “is to nurture the mind, communicate ideas, challenge ideologies, share notions, inspire creativity, and advocate and reinforce America’s founding principles — that is, to contribute to a vigorous, productive, healthy, and happy individual and to a well-functioning civil society and republic,” writes Levin. But today’s newsrooms “do not promote free speech and press freedom, despite their self-serving and self-righteous claims. Indeed, they serve as societal filters attempting to enforce uniformity of thought and social and political activism centered on the progressive ideology and agenda.”

Instead of pursuing these lofty goals, the media are doing the exact opposite: functioning as a propaganda tool for the Democratic Party and its ideology, thereby destroying their reason for existence and “threatening the existence of a free republic.”

While the media and their Democratic Party colleagues breathlessly warn that President Trump is a threat to the free press, they are just projecting. Trump is simply defending himself and issuing a clarion call to Americans, warning us that the partisan media are the real threat — both to the institution of a free press and to the republic.

Levin isn’t calling for government action against the press, but he is calling on us to inform ourselves of the threat they pose to our liberties and exhorting us to “demand a media worthy of our great republic.”

Unlike the liberal media elite, I proudly admit my bias in favor of my friend Mark Levin. But trust me: You’ll learn tons and be greatly enriched by this book.