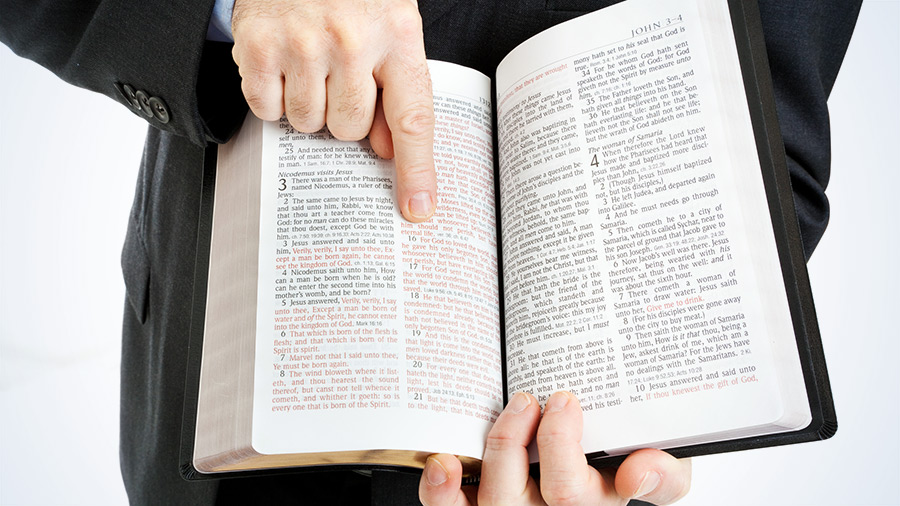 Many of us grew up with Bibles in which the words of Jesus are shown in red ink.

This practice is well intended. It’s designed to show special reverence for the words of the Savior.

However, printing Jesus’s words in red is misleading. Not intentionally. But still misleading.

Here’s why: The entire Bible was inspired by God. Historically, Christians have believed that from Genesis 1 through Revelation 22, the very words of the 66 books of the Old and New Testament were “breathed-out” by God.

The apostle Peter explained it this way: “No prophecy of Scripture comes from someone’s own interpretation. For no prophecy was ever produced by the will of man, but men spoke from God as they were carried along by the Holy Spirit” (II Peter 1:20-21).

The word translated “carried along” is also used by Paul’s friend Luke (Acts 27:15-17) for a ship that’s being blown by the wind. Theologian Ron Rhodes comments that “just as the sailors were active on the ship (though the wind, not the sailors, ultimately controlled the ship’s movement), so also were the human authors active in writing as the Spirit directed” (Christianity According to the Bible, pages 26-27).

So, all of the Bible was equally inspired by God. This is what the Bible says of itself (see, for example, II Timothy 3:16). Jesus is God, the second person of the Holy Trinity. Conclusion: Every word of Scripture has been breathed into human minds and pens by God. This means every word, verse and passage is equally authoritative.

And that means that the “red letter” verses have no more or less weight than Amos 4 or Hebrews 7.

This truth is lost on the Evangelicals who recently descended on Lynchburg, Virginia to challenge the politics of Liberty University president Jerry Falwell, Jr.

The “Red Letter Christians” are affirming something which any coherent reading of the Bible cannot countenance. They claim the words of Jesus take precedence over every other part of the Bible.

Really? How about the words of God given to Moses, Abraham, the prophets, the apostles, and so many others? Is Jesus superior to the Father or the Spirit?

And how can anyone assert that the author of the book itself — the Triune God of the universe — is less an authority than the member of the Godhead Who became a man?

Aside from the illogic, there is a deep theological motive for this peculiar, “red letter” reading of Scripture. Distorting the words of Jesus for political reasons gives one’s political agenda the hue of authority. And pulling His words out of context or misinterpreting them deliberately can lead to a semi-Marxist, semi-socialist, and very pacifistic message.

Interestingly, these professing Evangelicals have other beliefs that don’t line up with the Bible. They claim that Christian opposition to same-sex marriage and homosexual conduct is wrong. “The evangelical anxiety about inclusion and affirmation relates to our struggle with empire and the changes that threaten our privileged place in it,” according to Red Letter executive director Dan Golden.

Abortion “should not be politically decisive for Christians.” And this: “Jesus calls us away from the consumerist values that dominate contemporary America. Instead, he calls us to meet the needs of the poor. He also calls us to be merciful, which has strong implications in terms of war and capital punishment.”

Translation: Disdain free enterprise, redistribute income, demand national pacifism, and don’t execute murderers. Of course, if all of these things lead you to vote for Bernie Sanders, it must be just a coincidence.

Consumerism is an idol. God wants His people to be merciful. But He calls us to be generous to the poor so that they will be poor no longer. And His mercy is not isolated: He is also just, which is why the state does not bear the sword in vain (Romans 13:1-7).

All Christians need to be careful about not reading their political preferences into Scripture. Yet some things are more important than others. Destroying defenseless life in the womb, eroding the foundations of the family, and denying the equal authority of all Scripture are wrongs that rise to the top of the list of evils.

Red-lettering the words of Jesus does no favors to Him or to the body of Scripture. Let us honor Him by honoring all of His Word and, whether conservative or liberal, not using it to justify our preferred beliefs.

Understanding Why Many Non-Christians Hate the Bible