At The Capital I learned that people, or what Merrill called "Names and Faces," are the most important job of a journalist. 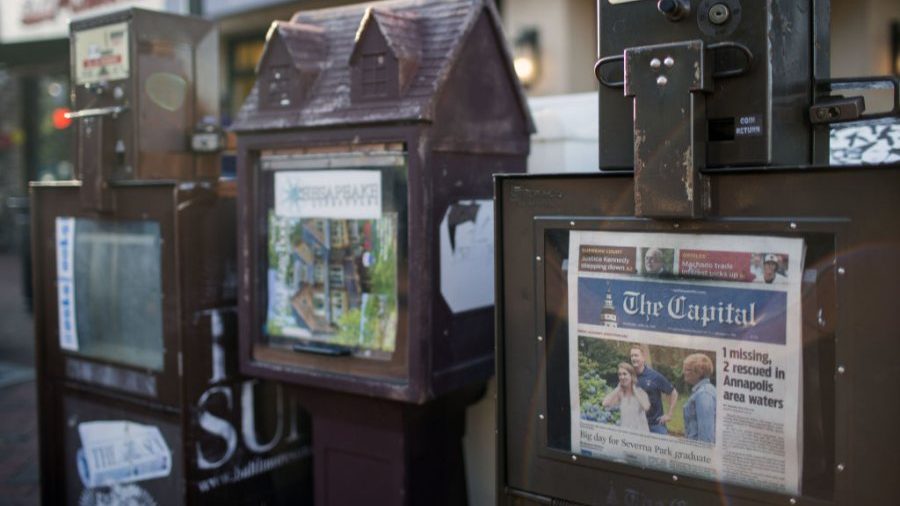 A newspaper stand selling the Capital Gazette is pictured in Annapolis, Maryland, on June 28, 2018.

As I am sure you have heard, Thursday there was a horrific mass shooting at the offices of the Capital Gazette newspaper, the main newspaper in the small-town state capital of Annapolis, Maryland. Of the five people who died, two were people I knew (one pretty well) during the time I worked there a few years ago. Three other people were also victims.

One of those people was Wendi Winters. A community journalist, she had a zest for life and a flair for detail as she described people, homes, fairs, events and local events to the N’th degree. Wendi could put the “color” in “local color” reporting. People loved it. Everyone read it and everyone knew Wendi.

Wendi was also a Facebook friend of mine. Soon after the shooting story broke, I went to her timeline. People posted that she had been scheduled to be at the offices conducting an interview. They were messaging frantically asking if anyone had heard from her. “It is not like Wendi not to report in…” was a common post. Another fearful post: “If anyone needed help, Wendi would have stopped to help them and I fear the worst.” Then the news came out that Wendi Winters was among the victims. A community journalist, Wendi Winters had a zest for life and a flair for detail.

Another victim I had known, but not so much personally, was Gerald Fischman, the editorial page writer. I knew Gerald because I read his editorials every day. They were fascinating. He was a genius. Many said he could have gone much further than a local paper if he had wanted to. But he stayed in Annapolis and wrote about Annapolis. He described the people there and the issues. He lent his own (and the editorial staff’s) point of view to the city in a way that often made you laugh, or cry, or just scratch your head and think. I often found myself saying “I hadn’t thought of that!” after reading one of his editorials.

I spent much of last night and part of this morning mourning the loss of these two outstanding, community-hearted people and the others whom I did not know well. In the process, I considered the lessons I learned during the two years I worked at “The Cap.”

The newsroom at that paper had the best writers, as a group, that I have ever seen. (And I have been around some pretty powerful writers.) But what stands out to me the most is the fact that most of them did not aspire to be famous. Most did not chase national journalist positions, which they could do only 25 miles to the east in Washington D.C. Instead, they devoted themselves to their community, its issues, events, politics, its people and their kids. And they did it with passion and with heart.

Wendi and Gerald were just some of the outstanding journalists there. I used to love standing by the desk of the late Earl Kelly and chatting with him. Earl passed away three years ago, shortly after retiring. He had gotten a law degree (we had several in the newsroom with law degrees) but left law to write about the things he loved. He was an investigative reporter who covered Maryland politics, the Naval Academy and sometimes other beats.

Writing about local people and local news may not be glamorous, but it is vital for our survival as a society and a nation of communities.

Earl and I talked about the demise of small town newspapers. He said something that I have never forgotten. “Small town newspapers are dying and it is tragic because they help form the fabric of those communities.” He talked about how they helped people to know who they were, from the townspeople to the farmers near them. “Even the people in other towns got to know their neighboring towns through their newspapers.”

There were many like that, and a lot of the DNA for that vision came from the publisher, Phil Merrill. When I arrived on the scene, Merrill was listed as the fourth-wealthiest man in Maryland. While building up the paper, he had served at high levels in the departments of Defense and State in Washington. When he died, only a few months after I was hired as the new Internet Director, his memorial service in Washington had speakers such as then-vice-president Richard Cheney and former CIA director James Woolsey, both close friends of his.

You can imagine the awe I felt the first time I was alone with him in his office in Annapolis. After quizzing me fiercely on “What do you plan to do with us on the Internet?” he gave me a lesson in local journalism. “What is important to us is what matters to THOSE people on THAT street!” He proclaimed it loudly, vigorously jabbing his finger at the window of his office. It sank in.

A Dangerous — And Vital — Job Many said Gerald Fischman could have gone much further than a local paper if he had wanted to. But he stayed in Annapolis and wrote about Annapolis.

At The Capital, I learned that people, or what Merrill called “Names and Faces,” are the most important job of a journalist, or any writer for that matter. It is not the abstract thought or policy (though those have proper place). It is all about families, their kids, the Naval Academy cadets and their families, the politicians and their families. And yes, Wendi had it right: it is also about the houses they live in, the clubs they start and belong to and the community that celebrates with them.

The irony of the matter is that the murder suspect apprehended on the scene, Jarrod Ramos, had been waging a legal and social media war against The Capital for several years because they, with their dedicated local news coverage, had covered his trial in 2011. He went to court for the “harassment” and stalking of a young woman in the area. He also took the paper to court (and lost). He then reportedly waged a social media campaign against The Capital for years, swearing to get revenge on the journalists, editors and publishers.

Writing about local people and local news may not be glamorous, especially in these days of media figures chasing celebrity-outrage recognition and “gotcha” notoriety. But it can still be very dangerous — perhaps because it is real writing about real people who are close to each other. And, dangerous as it may be, it is vital for our survival as a society and a nation of communities.

Wendi, Gerald and the other victims, as well as the staff of that paper — present and past — are heroes to me for that reason. And most of them are and were outstanding writers.