Killing the Unborn, Confessing to Plants 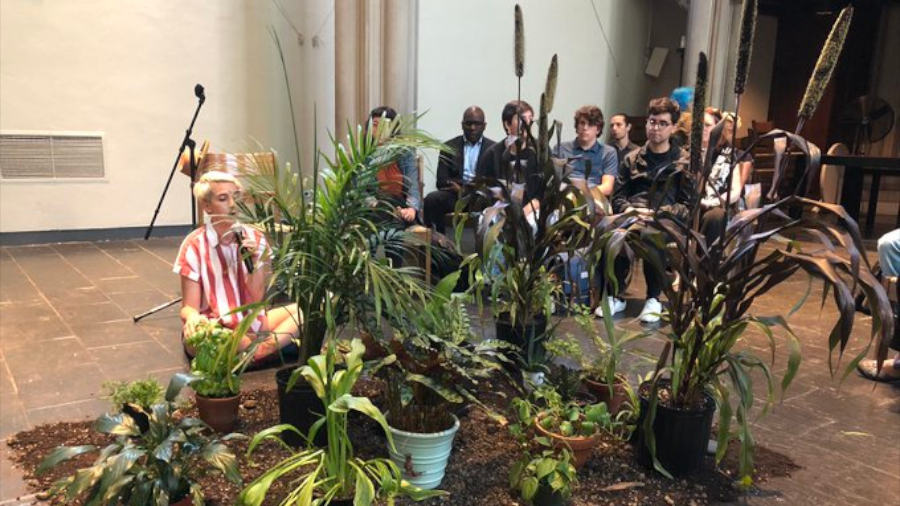 I’m all for environmental stewardship. There’s something to be said for a biblically-based ecology. But I find it beyond ironic that a staunchly liberal seminary which supports a woman’s “right” to abortion held a special chapel service to make confession to plants. So, it’s fine to take the lives of unborn babies in the womb, but we must confess our sins to the plants. May God help us.

On September 17, Union Theological Seminary tweeted, “Today in chapel, we confessed to plants. Together, we held our grief, joy, regret, hope, guilt and sorrow in prayer; offering them to the beings who sustain us but whose gift we too often fail to honor.

“What do you confess to the plants in your life?” they asked.

One seminarian tweeted, “Here was my confession. ‘I confess that even as I’ve waxed poetic and theological about how indispensable you are, I’ve privileged my own comfort and convenience over your wellbeing.’”

In sarcastic response to the chapel service, singer and songwriter Bob Bennett penned a penitent hymn, beginning with:

I confess my unbelief
To my leafy brethren
I’ve given you such grief
While you give me oxygen
Like a prodigal come home
An errant journey I was on
Now no more to roam
I’ll no longer mow my lawn.

But the seminary was taking this quite seriously. They released a series of 10 tweets defending their plant confessional.

The first tweet stated, “We’ve had many questions about yesterday’s chapel, conducted as part of @ccarvalhaes’ class, ‘Extractivism: A Ritual/Liturgical Response.’ In worship, our community confessed the harm we’ve done to plants, speaking directly in repentance.

Interestingly, although I’ve served as a visiting or adjunct professor at 7 leading seminaries, I don’t recall ever hearing of a class on “Extractivism: A Ritual/Liturgical Response.”

In fact, I don’t recall encountering the word “extractivism” before. (It looks like my spell checker never saw it either.) I guess I’m still in the theological dark ages. Really, a pity.

Others, however, chimed in support of Union, including Kaitlyn Curtice, a Native American Christian author. She tweeted: “Christians have historically mocked/punished Indigenous peoples for having a relationship to Segmekwe, Mother Earth, and our creature kin.”

Christians have historically mocked/punished Indigenous peoples for having a relationship to Segmekwe, Mother Earth, and our creature kin.

It hasn't changed much.
I'm grateful to @UnionSeminary for stepping into this space.

Church, there is so much learning & unlearning to do. https://t.co/mM9WoaWJJQ

There’s One Being Who Sustains Us

There is one Being who sustains us (and the plants), and I will make my confession to Him.

But the purpose of this article is not primarily to mock what took place in this chapel service. Instead, it is to point out the theological (and moral) bankruptcy of a seminary once it throws out the full inspiration of Scripture and denies the uniqueness of Jesus’ work of redemption.

Accordingly, a seminary spokesperson explained that, at their chapel services, you might encounter a Muslim prayer service one day, a traditional Anglican service another day, then a Buddhist meditation the next. Yes, “given the incredible diversity of our community, that means worship looks different every day!”

That’s why, back in 1939, Dietrich Bonhoeffer, who attended Union and then briefly taught there, could note that, the students “are completely clueless with respect to what dogmatics is really about. They are not familiar with even the most basic questions. They become intoxicated with liberal and humanistic phrases, are amused at the fundamentalists, and yet basically are not even up to their level.” And that was 1939!

Bonhoeffer remembered that “students ‘openly [laughed]’ at a lecture on sin and forgiveness, and accused the seminary of having ‘forgotten what Christian theology in its very essence stands for.’” What would Bonhoeffer think today?

Not surprisingly, and in keeping with the radical left ideology that esteems the life of a tree above the life of an unborn baby, Union Seminary tweeted this message on July 1: “‘In Numbers 5 you actually have an account about how a priest is supposed to assist an abortion…In Jesus’ time, women used all sorts of means—as they have throughout history—to deal with unwanted pregnancies.’ – @SereneJones on abortion and the Bible.”

Embedded in the tweet was a Fox News video clip which cited Madonna saying that Jesus would be okay with abortion. The clip also featured a debate between Pastor Shane Idleman and Dr. Serene Jones, President of the Union Theological Seminary.

In the video, Dr. Jones affirms Madonna’s position (also pointing to her as a very religious person) before absolutely butchering the Bible. (Yes, “butchering” — it’s not an overstatement.) And Dr. Jones is the president of a seminary?

According to Dr. Jones, Numbers 5 contains an account of “how a priest is to assist the abortion of a woman seeking an abortion.” She claims that in the passage you have “positive affirmation” of abortion.

This is absolute, total and complete rubbish. Rubbish! Numbers 5 says nothing of the kind.

Numbers 5 is in no way a positive affirmation of abortion. The text is a ritual of judgment for a woman suspected of adultery. The priest pronounces a curse over her. The woman, if guilty of adultery, is cursed, not helped. And whatever happens to her body is negative and disfiguring, not positive and affirming. (And in reality, Numbers 5 has nothing to do with abortion at all. See here.)

But this is exactly what you can expect from a seminary that long ago abandoned the truth. Confession is made to plants while the slaughtering of the unborn is affirmed.

All this makes me wonder if Union might have a special class called “Great Women of the Bible,” with Jezebel at the top of the list.