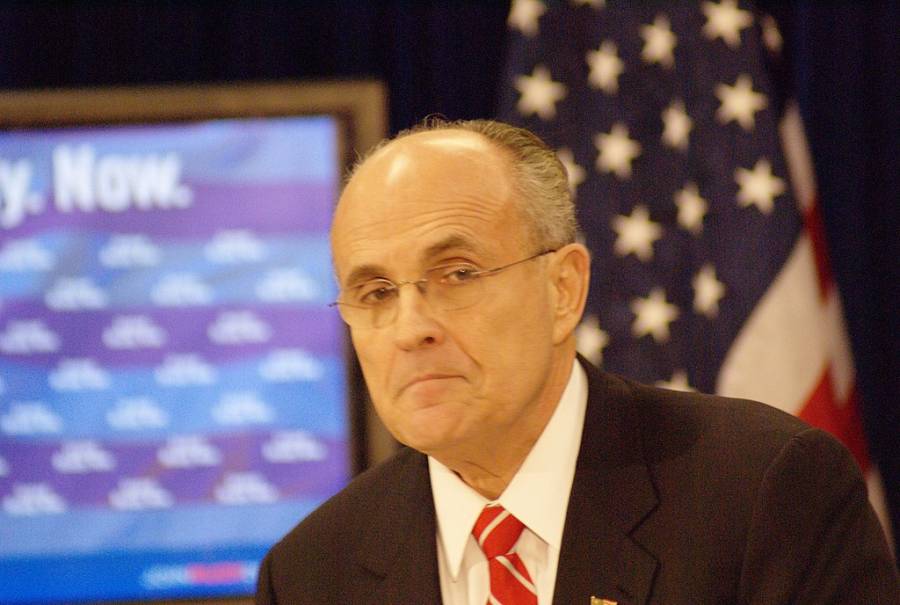 Rudy Giuliani has been taking some heat lately, even from certain Republicans, for his frequent media appearances in defense of his client, Donald Trump. Secretary of State Mike Pompeo and Attorney General Bill Barr have expressed some discomfort with it.

I’ll tell you what, though — at a time when the media (and, of course, congressional Democrats, notably the gifted “parodist” Adam Schiff) are pushing a shamefully inaccurate account of the President’s phone call with Ukrainian President Zelensky, and when the flow of information in our culture has been so politicized leftward, President Trump needs a strong public voice for truth and the facts. If that has to be his own personal lawyer, then so be it.

Giuliani appeared on this week’s Sunday Morning Futures with Maria Bartiromo. What ensued was magnificent television that stretched through the first half of her show. Although his participation was as the President’s attorney, he made it clear at the outset that he is a former U.S. Attorney for the Southern District of New York, where he investigated many corruption cases involving both Democrats and Republicans. He noted that this was at a time when “we didn’t have the standard that exists now, which is you only investigate Republicans.”

Bartiromo, exasperated as we all are at this point by the two-tier justice system and the lack of accountability on the left, rose to shouting at times and did a superb job of playing Devil’s Advocate. Fortunately, Rudy had come armed with documentation, as he always does these days.

Rudy Lays Out the Evidence

He submitted this evidence six months ago and was met with crickets, so regarding the two-tier justice system, he had this to say: “These things that are alleged of Joe Biden, if you changed the name to Trump — is there any fair-minded person in this country that thinks that for six months I would be pointing them out, putting them on line, and the Washington Post, The New York Times wouldn’t have made a major scandal out of this? If you think that, you’re not observing reality.”

Bartiromo asked him if the accusation was true that he worked with other pro-Trump attorneys Joe DiGenova and Victoria Toensing to get opposition research from Ukraine on Joe and Hunter Biden. He told her he had not. He said it wasn’t his purpose to get dirt on Biden. In fact, “Biden was in our way,” in that he’d had general prosecutor Viktor Shokin fired and the replacement had dropped both the Burisma case and the one into a company called AntAC, where much of the false anti-Trump dirt that was given to the Hillary campaign came from.

(FLASH! We interrupt this commentary with some background on AntAC, the “Anti-Corruption Action Centre,” a George Soros-connected organization. The report John Solomon posted in March of this year is exponentially more significant now, in light of the Biden/Ukraine story. It’s a must-read: US Embassy pressed Ukraine to drop probe of George Soros group during 2016 election)

Interference from Ukrainians to help Hillary in 2016 was found by a Ukrainian court. And Giuliani says he has four sworn affidavits by “people who want to go under oath that say that false information…about the Trump campaign was given to the American Embassy, the DNC, operatives for Hillary Clinton and The New York Times.”

Of course, none of these attorneys — Giuliani, diGenova or Toensing — would have been operating in an official government capacity, but it’s hard to know what the problem is with that. As Giuliani made clear, he is a lawyer defending his client, and part of that is finding out what really happened, especially any exculpatory information.

Ukrainian officials have made it clear that they had information on Burisma Holdings and Hunter Biden’s work (“work”?) there that they had repeatedly attempted to turn over to our FBI and State Department but could get no response from them. The information was finally dropped in Giuliani’s lap in November, first by two Americans who said they’d been trying for a year to get it to the FBI/DOJ.

Shokin, whom Biden got fired by threatening to withhold over $1 billion in aid, had sworn to an affidavit saying, in part, this:

On several occasions, President Poroshenko asked me to consider the possibility of winding down the investigative actions in respect to this company [Burisma], but I refused to close this investigation. Therefore, I was forced to leave office under direct and intense pressure from Joe Biden and the Obama administration. In my conversations with Poroshenko at the time, he was emphatic that I should cease my investigation regarding Burisma. When I did not, he said that the United States (via Biden) were refusing to release the $1 billion promised to Ukraine.

Then there’s another sworn affidavit from another Ukrainian prosecutor, this one saying that several days later, a PR firm and an attorney for Hunter Biden came to see him and apologized for having to exaggerate the claims of corruption about their office in order to get Shokin fired. They went on to reiterate that they wanted the Burisma case dismissed.

It doesn’t get much clearer than that. Yet the FBI did nothing. And we know Biden is not truthful when he says no investigation of Burisma was going on then.

Giuliani likened himself to Perry Mason in this situation: Mason, in order to clear his client, has to find out who really committed the murder. Say there’s a witness who goes to the police and says, “I know who really did this,” but the police don’t pay attention. Perry has to investigate the case himself. (Then he traps the murderer into making an impassioned courtroom confession, but that won’t be happening here. I digress.)

Simply stated, Giuliani met with Ukrainians because they had information that could clear his client. He was defending his client on allegations that he conspired with Russia when much of the “Trump/Russia” dirt — involving Paul Manfort, for example — arose out of Ukraine.

In fact, he was told of evidence, including witnesses, that people in the Obama administration told Ukrainian officials “to dig up dirt on Trump going back to as early as January 2016.” That, not the Bidens, was the larger issue for him, as can be seen in Trump’s phone call with Zelensky. In the call only a few lines are devoted to the Bidens.

Indeed, it seems to me, after reading the transcribed notes on the call, that the reference to the Bidens seems almost like an aside. Giuliani himself called that part “an afterthought,” pointing out that the notes contain 78 lines about “collusion in general” and only 4 about the Bidens. And, importantly, Zelensky has clearly said that he never felt “pushed” on the Biden case.

Giuliani also mentioned something important that we’ve said here: Just because Biden is a candidate for President, that doesn’t mean he gets immunity from being investigated and possibly prosecuted for serious pay-for-play and conflict-of-interest allegations. (I would note that Hillary got it, but what a travesty.) Giuliani is right to say that Republicans in the Senate have got to step up. Where are most of them?

This interview is a must-see. For the most magnificence, be sure and watch through the fireworks in the last segment:

This Just In: In what may be a political first, Joe Biden’s campaign is demanding that the media stop interviewing Rudy Giuliani. They accuse Giuliani of spreading lies and fake conspiracy theories, which, of course, never stopped them from booking a guest before. Rudy’s response was to point out that he brings along documentation to support everything he says.

Since Congressional Democrats have made clear their utter disregard for due process rights, I’m not surprised that they don’t even want to allow Trump the right to an attorney to defend him. (Indeed, Hillary Clinton reportedly made the same unconstitutional argument about President Nixon during her first major job with the House Judiciary Committee during the Watergate impeachment investigation 45 years ago.)

Perhaps the best response came from Trump 2020 campaign manager Brad Parscale, who tweeted, “Can we request the removal of Democrats on TV that push hoaxes? Wait, but then who would do the interviews?”

It will be fascinating to see if any major media outlets are actually deep enough in the Democrats’ pockets to publicly admit that they take marching orders straight from their campaigns. This is further proof of the glaring double standard that the Democrats expect everyone to observe, and how spoiled they’ve become from years of enjoying a media monopoly: They would have a mental meltdown over the very idea that any media outlets might deign to speak to anyone who questions their official narrative.

First, they told us it’s not improper at all for Biden to brag about having threatened to withhold aid from Ukraine to force them to fire their prosecutor who was (we are assured, entirely coincidentally) looking into a company whose board lucratively employed Biden’s son. But it’s an impeachable offense for Trump, who as chief law enforcement officer has a sworn duty to uphold the law, to request that suspected corruption in Ukraine be investigated, as required under a mutual agreement signed in the ‘90s by Bill Clinton.

So the person seeking the investigation into corruption should be removed from office for allegedly threatening Ukraine with withholding aid (which both parties deny) and replaced with the one who proudly bragged about actually doing it. The mind reels.

Now, we’re not only supposed to accept that pretzel logic at face value, but the Democrats are stamping their feet and demanding the media stop talking to one of the main figures in the story because he’s saying things they don’t what they want us to hear. No wonder they’re so enamored of Greta Thunberg. It’s like an entire Party of spoiled 16-year-olds.