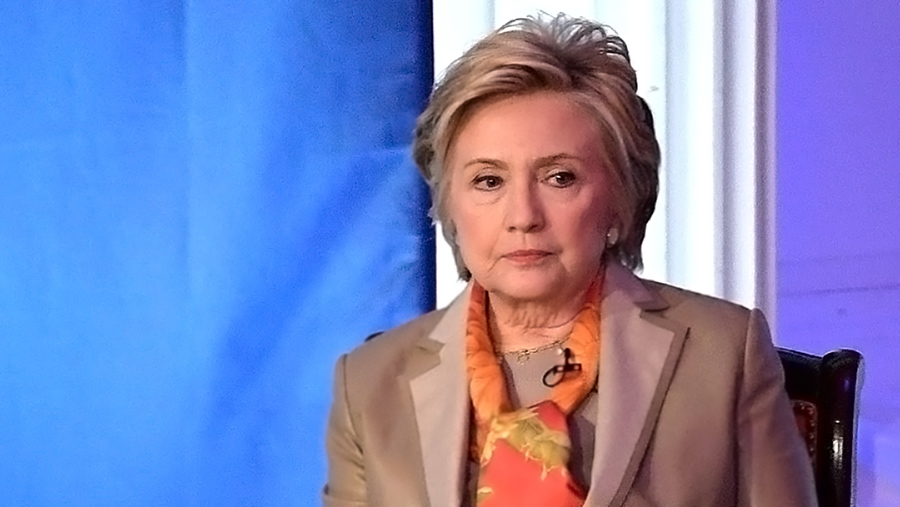 By Rachel Alexander Published on October 8, 2019 •

Will Hillary Clinton enter the presidential race? Rumors are flying. She’s acting like someone who wants to run.

Clinton’s popping up everywhere, increasing her public visibility. She’s currently on a book tour promoting a book she wrote with her daughter Chelsea. The Book of Gutsy Women: Favorite Stories of Courage and Resilience comes out this month. She’s dropped the horrible looking tent dresses she’d been wearing the past year and returned to a more professional look.

President Trump tweeted on Tuesday that she should enter the race.

I think that Crooked Hillary Clinton should enter the race to try and steal it away from Uber Left Elizabeth Warren. Only one condition. The Crooked one must explain all of her high crimes and misdemeanors including how & why she deleted 33,000 Emails AFTER getting “C” Subpoena!

Don’t tempt me. Do your job.

Trump is acting as if he’s already running against her, constantly taking jabs at her on the campaign trail. Supporters respond chanting, “Lock her up!” He thinks he’d beat her again. Does Hillary think she can take him down this time?

In March, Clinton said she wasn’t going to run for president. But politicians often say that. Then they change their mind.

A year ago, in October, Clinton was much more ambivalent about running. She said she didn’t want to run for president, but admitted she wanted to be president. She also said, “I think we’d have a number of excellent candidates who would be really formidable on the campaign trail, but let’s wait and see who it is. I’m just going to wait and watch what happens.” Was that a signal she’d run if she thought the candidates weren’t good enough?

Later that month, the Clintons’ former adviser and pollster Mark Penn and former New York City politician Andrew Stein claimed in an op-ed for The Wall Street Journal that Clinton was going to run. They said she would rebrand herself as a “liberal firebrand.” She “will not allow this humiliating loss at the hands of an amateur to end the story of her career.”

They predicted she would run again. “Maybe not at first, when the legions of Senate Democrats make their announcements, but definitely by the time the primaries are in full swing.”

Others say the same thing. Longtime Clinton aide Philippe Reines told Politico that he thought Clinton was the the only Democrat who has a chance of beating Trump. In January, CNN’s Senior White House Correspondent Jeff Zeleny said Clinton told her close friends that she was leaving the door open to running.

A UK gambling site has more bets placed on Clinton getting the Democratic nomination for president than any of the announced candidates.

Apparently many people agree. A UK gambling site has more bets placed on Clinton getting the Democratic nomination for president than any of the announced candidates.

They have good reason. The field of Democratic candidates gets weaker. Joe Biden, once the clear frontrunner, hasn’t raised enough money. His son’s corruption is hurting him.

Elizabeth Warren is now ahead of him in the polls. But Wall Street Democratic donors have warned they will back Trump if Elizabeth Warren gets the nomination. Bernie Sanders just suffered a heart attack and had to cancel numerous appearances.

And the other candidates in the race don’t have anywhere near the momentum of those three. If they fail, who will the Democrats have? Hillary?

Hillary Clinton believes the 2016 election was stolen from her. She wants to reclaim what she thinks is rightfully hers. She supports impeaching Trump, and no doubt thinks the investigation makes him a weaker candidate.

Hillary told CBS on Sunday, “There should be an impeachment inquiry opened. And I think, sadly, there are a number of grounds. But this one is incredibly troubling. The most outrageously false things were said about me. And unfortunately, enough people believed them.” She called Trump an “illegitimate president.”

The president is a corrupt human tornado.

The conservative polling firm Rasmussen Reports, no friend to Clinton, shows Clinton and Trump in a dead heat in a hypothetical 2020 rematch. However, that same poll found that 59% of Democrats don’t want her to enter the race.

So what’s actually going on? Clinton is most likely testing the waters. She’s elevating her profile to gauge how much support there is for her. If there is, she pushes forward. If there isn’t, she steps back with no loss of face.

She’s also waiting to see if the current crop of candidates will continue to self-destruct, and how damaged Trump will be by the efforts to impeach him. I don’t believe she’s completely made her mind up yet, but is leaning towards entering the race. I predicted in January that she will enter the race, and I still think she will. She’s got the experience, the name recognition and the victim status (sympathy vote) to win the Democratic nomination.

But here’s the big question: Can she beat Trump? Will she triumph this time? Or will she be humiliated again?

Hillary lost to him once before, and it’s likely she will lose to him again. She didn’t understand the importance of focusing her campaign on the swing states. She took them for granted. Trump, the novice candidate, didn’t. He is already heavily campaigning in the swing states.

The Bee Calls It

Plus Clinton doesn’t come to the campaign clean. She’ll campaign with baggage the other Democrats will exploit. Like the scandal of misusing official emails. Like her close ties to Wall Street. If she’s the nominee, Trump will have a field day. He is probably correct not to fear a Clinton candidacy again.

The Babylon Bee reported on Tuesday that Clinton has entered the race. That settles it. What the Bee means as satire will turn out to be reality.

UPDATE: In an interview with PBS, when asked if she would take Trump up on his challenge of suggesting she run again, Clinton responded, “So maybe there does need to be a re-match. I mean, obviously I can beat him again.” She indicated she was joking, but it sounded rather arrogant considering she lost to Trump. Winning the popular vote didn’t mean you won the election.