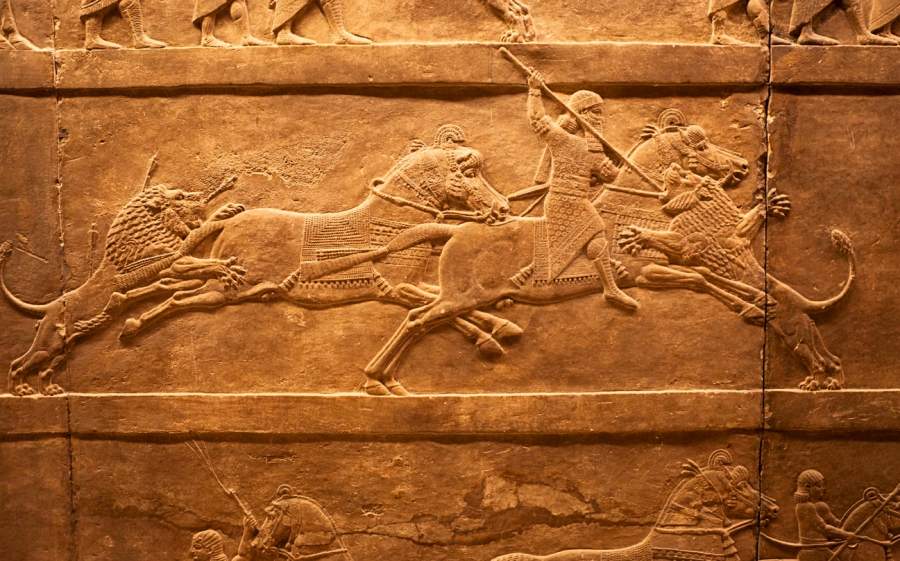 By Juliana Taimoorazy Published on April 1, 2021 •

On March 18, the world awoke to the news: the governate of Mosul gave permission to destroy a very important section of the ancient Nineveh wall to expand a road, using bulldozers. This less than 7 years after ISIS tried to exterminate the culture of Iraqi Christian Assyrians.

The Nineveh wall was built 3,000 years ago by ancient Assyrians and withstood the test of time — until in 2014, ISIS used heavy machinery to tear down the gates of Nineveh. Now the post-ISIS government is bulldozing the walls as well.

The move came ten days after Pope Francis completed his pilgrimage in Iraq on March 8.

According to reports, the Mosul Governorate wanted to open a road, and the ancient wall blocked the way. Adding insult to injury, international governments, human rights organizations and international news agencies have been completely silent about this attack against a magnificent part of Iraq’s cultural heritage.

The Iraqi government does not care about heritage or suffering minorities. All they care about is money, theft and their self-interests.

The only exception to this silence was Special Broadcasting Service (SBS) in Australia which reported:

The world is witnessing the most horrific act of destruction of the historical wall of Nineveh built in the 700 BCE. While Assyrians around the world are currently preparing to celebrate their Assyrian ancestors’ tradition of Akitu, the Assyrian New Year, an ancient Assyrian heritage site was bulldozed by heavy earth moving machinery.

The wall of Nineveh built during the reign of King Sennacherib (reigned 705-681 BCE) which stretches 12 km along the city of Nineveh (Mosul, Iraq) is being partially bulldozed by private contractors.

Nineveh, the capital of the ancient Assyrian Empire, was the world’s largest city prior to its destruction in 612 B.C.E. The walls are repeatedly mentioned in the Bible, especially in Genesis, Jonah, Nahum, Isaiah, Kings, Zephaniah, Matthew, and Luke.

Christians Since the Beginning

The indigenous Christian Assyrian community in Iraq has preserved its existence in the region despite centuries-long persecution. And Nineveh is no stranger to destruction, ethnic cleansing and cultural genocide. When ISIS invaded Mosul in 2014, its fighters also launched a war on the region’s ancient and medieval cultural heritage, attacking churches, biblical ruins, and sites with bulldozers and explosives. Jonah’s Tomb in Mosul was destroyed in July 2014. A year later, parts of ancient Assyrian sites such as Nimrud and Khorsabad were left in absolute ruins. The United Nations Educational, Scientific and Cultural Organization (UNESCO) described the bulldozing of Nimrud as a “war crime.”

Whatever ISIS could not destroy in historically Assyrian lands, the Iraqi government is today standing by watching its annihilation. The ethnic cleansing of Assyrian people in Iraq is accompanied by the cultural genocide against their historic heritage. As Evon Sorisho, an Assyrian from Iraq, notes:

If the government of Iraq does not value modern Assyrians, why do we expect them to value our ancient artifacts? The destruction of the Nineveh Wall is not just about ‘building a road.’ It is about the continued erosion of Assyrian history & breaking the historic link to our lands.

Fighting to Save What Remains

The construction of the road has been suspended thanks to the efforts of those in Iraq who care about the country’s cultural heritage. One such individual is Dr. Faisal Jeber, a prominent Mosul-based archeologist, and a civil rights activist who founded Noah’s Ark for Heritage Resurrection (NAHR) to help preserve the cultural heritage of the region.

“The northern Nineveh wall has been destroyed,” Jeber said. “The eastern wall, which is larger, is also under threat. If the destruction of the 3,000-year-old Nineveh walls is allowed to continue, it will become the norm across Iraq and corrupt politicians will receive further financial gains for allowing such destruction to happen.”

“There has not been a full archeological investigation of this particular area. If they would do so, the investigation would find remnants of ancient wars and other artifacts of immeasurable value,” Jeber added.

Athra Kado, an Assyrian rights advocate based in Iraq, thinks that the northern wall has become a victim of politicians’ corruption and greed. “I think it’s all about corruption and some people here can’t stand seeing remnants of ancient Mesopotamia, the cradle of civilization,” he said. “They might also aim to sell the stones of the wall as Iraq is very unstable these days. The result is ethnic cleansing, and erasure of the true history and culture of Iraq, Mesopotamia and specifically Assyria. Kado continues:

The destruction of the wall shows that these people want to erase our roots, and the root of this ancient Assyrian civilization, in a way similar to what Saddam’s regime did and the Kurdish racist political parties are currently doing. When a group that is in charge has that destructive mentality, the result is obvious, and we have faced it already. It leads to either ethnic cleansing or religious genocide, and we are affected by both, as we are Assyrians and Christians.

But unfortunately, those countries that have a hand in Iraqi politics do not want to understand this aspect of Iraqi politics, and they’re supporting the perpetrators. Unfortunately, many Iraqi government leaders are corrupted, and they don’t care about history, culture or any community. They care mostly about how they can increase their financial gains.

Duhok-based Stefan Jankel, who works for Samaritan’s Purse International Relief, believes that the destruction of the wall constitutes an act of cultural genocide. “Whoever does not care about the antiquities of this land denies the land’s cultural heritage and history,” Jankel said. He went on:

The Assyrian Christians in Iraq are a minority who stayed despite the 2014 genocide at the hands of ISIS. The destruction of the ancient wall is a message to us that they do not want to respect our civilization or anything that connects us to this land. By demolishing the wall, and by not preserving the antiquities, and not understanding the value of these antiquities, they tell us Assyrians that we do not exist here. That we are a people who have no importance or influence on them and their decisions. And our voices are never heard.

Stefan thinks that the Iraqi government has failed to respect the history and cultural heritage that the wall represented because “the government is corrupt and is busy with theft, including many leaders and officials. They do not care about heritage or suffering minorities. All they care about is money, theft and their self-interests.”

Activists Gain a Respite from Destruction

On April 1, Jeber and other rights activists are celebrating the halt in construction of the offending Nineveh road as a victory. Jeber said:

When the Mosul Governorate began building the road two weeks ago, they brought local police to block access to the destruction site and forbade any civilian from capturing images. Despite the intimidation tactics from the Governorate and the police presence, social media became flooded with images of bulldozers destroying the ancient walls. And last week, the Iraqi ministry of culture and tourism launched a three-day investigation and sent a committee to the site to investigate. As the civil society posted images for the world to see, everyone noticed a striking similarity between the destruction by ISIS and this recent act committed against preservation of this ancient site.

There are several gates of the wall. Adad and Nigral gates were damaged by ISIS. But on April 1 at the Sin gate, by the northern wall we celebrate Akitu, the Assyrian New Year and the victory of civil society in suspending the construction project and saving our heritage.

Jeber concluded: “These walls were built by Assyrians, they belong to all of Iraq and to the world’s cultural heritage. They are a testimony to the ancient history of this land, to the achievements, sufferings, the falls and the rise and the resilience of the people of Mesopotamia and how far we have come throughout the centuries. The international community must help preserve these invaluable artifacts of our mutual humanity.”

Juliana Taimoorazy is founder of the Iraqi Christian Relief Council.