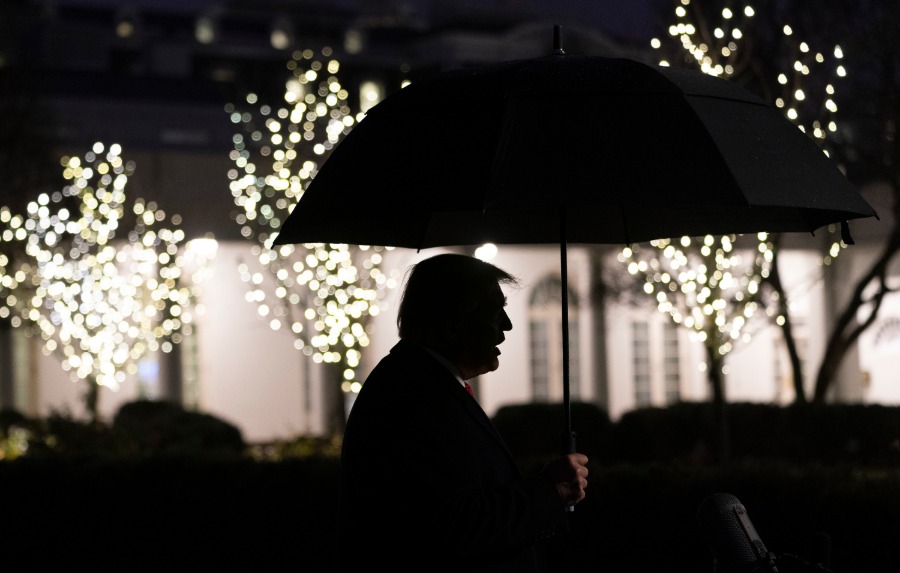 President Donald Trump is seen holding an umbrella outside the White House on Tuesday, Dec. 10, 2019, prior to boarding Marine One.

The epic magazine, Christianity Today, shocked me by their endorsement of the Congress’ decision to impeach the 45th President of the United States. In light of their founder, Billy Graham’s support for President Trump. Their stance is myopic at best.

As a Black evangelical, I have seen a pattern of high-sounding rhetoric coming from some well-meaning white, evangelical Christian pundits, without a commitment to practicing the truths they espouse. Billy Graham had a different spirit. In the days of segregation, he desegregated his meetings. Allowing thousands of blacks to receive Christ. This daring move eventually helped changed our U.S. church culture and the nation’s view of Civil Rights.

Ironically, the nation once again stands on the precipice of important social change. Unfortunately, Christianity Today has chosen to follow the example of our nation’s intellectual elite instead Christianity’s grass roots practitioners. Today the question is, How will American justice work in the future? Does impartial due process matter any more?

Blacks have been on the receiving end of blatant cronyism, vigilante action, and mob justice for 400 years. We have learned that if it walks like a duck, quacks like a duck, and looks like a duck it probably is a duck. The dramatic increase in the percentage of Blacks opposing the impeachment of President Trump is based on the absence of an objective sense of fairness and due process.

In order for impeachment of a president to stick, the Black Christian wing of the Democratic Party and our nation’s urban centers must see “Blind Justice” at work. Instead of blind justice, many have named President Trump a “bad boy billionaire.” He has been seen as guilty until proven innocent, despite the fact that he has broken no laws. He has largely been tried for his unorthodox methods and frank speech instead of factual, specific transgressions.

For a growing number of Americans of all ethnicities, our President has become the ultimate advocate for religious liberty, economic justice (through the opportunity zones and criminal justice reform), and protection of the unborn.

Now is the time that Christians worldwide need keen discernment (like Solomon of Old) and Christ-like forgiveness and mercy. We must create a nation full of righteousness and justice — representing the character of Christ himself.

Bishop Harry Jackson serves as Senior Pastor of Hope Christian Church in the Washington, D.C., area. He is one of the chief conveners of The Reconciled Church: Healing the Racial Divide Movement, an effort to heal the racial division first in the church and then the nation.