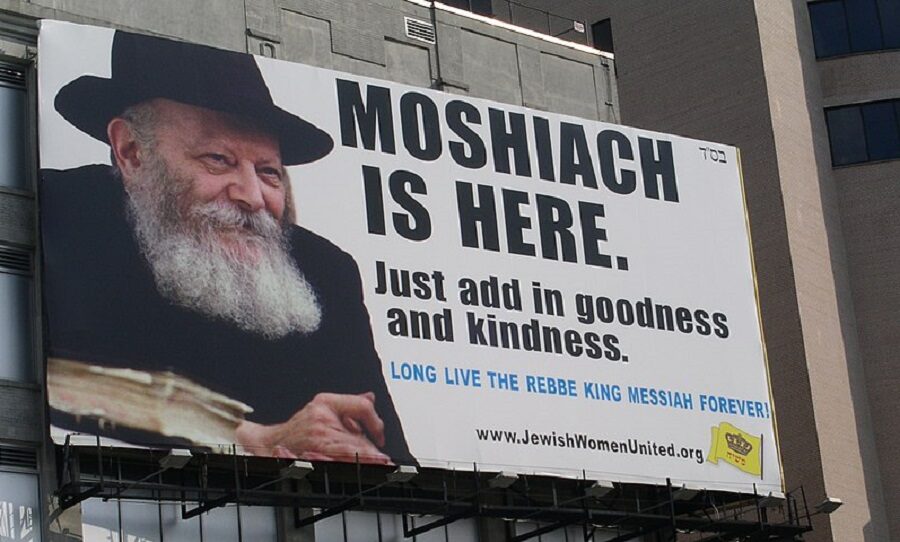 Picture of a billboard in NYC proclaiming that then recently deceased Lubavitcher (Chabad) Rebbe, Rabbi Menachem Mendel Schneerson, was/is the Moshiach (Messiah). (He died in 1994. Picture is in 2005.)

For many years, scholars and skeptics and psychologists and sociologists have told us that the disciples experienced a form of cognitive dissonance after Jesus died. It so rocked their world and crushed their expectations that they went into deep denial to the point of believing that Jesus really rose from the dead.

To be sure, other scholars have attacked this theory from a number of powerful and persuasive angles, but my book Resurrection tackles it from a different angle. Specifically, I focus on a modern-day, parallel test case that completely demolishes this argument.

To give the relevant background, in 1994, a leading rabbi, one of the most influential Jews of the 20th century, died at the age of 92. His name was Menachem Mendel Schneerson and he was known as the Lubavitcher Rebbe. But this rabbi had become so influential that, before his death, his followers began to proclaim that he was the long-awaited Messiah. Redemption had come for Israel!

Toward the end of his life, however, he suffered two serious strokes and was no longer able to communicate, making it impossible for him to quiet those who were convinced he was the Messiah. They were sure that, at any moment, he would be glorified, and around the world, they eagerly awaited the announcement. Instead, to their absolute shock, he died. Yes, the Rebbe, their revered leader, was dead.

But some refused to believe it. “He will soon rise!” they proclaimed. Others said, “He’s not really dead. This is just a test for our physical eyes.” Some even camped out near his gravesite, waiting for his resurrection, but it never happened. And yet this Jewish movement not only continued after the Rebbe’s death, it actually grew, with many of his followers to this day claiming that he is the Messiah.

In the eyes of some Jewish scholars, this paralleled the early Christian movement. Both movements centered around a charismatic Jewish rabbi. Both movements believed their rabbi was the Messiah. Both claimed that their rabbi somehow lived after death. And both movements survived their leader’s death and continued to grow and flourish. Cognitive dissonance explains what happened with Yeshua and with the Rebbe.

What I demonstrate in Resurrection is that the exact opposite is true on several levels. In fact, we now have a parallel test cast in which we can examine the cognitive dissonance theory in depth.

Devastated by His Death, Shocked by His Resurrection

First, the followers of Jesus were completely devastated by His death and were shocked by His resurrection. They were not expecting it. Basically, their reaction was, “Risen from the dead? No way! I won’t believe it unless I see Him with my own eyes!” Even though the Lord had repeatedly told them He would die and rise, they just didn’t get it, losing all hope when He was crucified and then being completely blown away when it really happened.

In contrast, the most devoted followers of the Rebbe were waiting for him to rise, expecting him to rise, convinced he would rise. And yet, to this day, none of them claim to have seen him risen and in the flesh. They may speak of his spiritual presence or claim that he’s not in the grave. But the reality is that none of his followers, especially the leaders, claim to have seen the Rebbe risen from the dead, in the flesh.

Second, the early followers of Jesus boldly and repeatedly pointed to His very real death. They preached “Messiah crucified,” emphasizing the horrible nature of His death and then pointing to His glorious resurrection.

In contrast, those followers of the Rebbe who still claim that he is the Messiah will not speak of his death. They don’t mark that date on their calendars (whereas the death of a famous rabbinic leader is normally memorialized and commemorated), and they still speak of it in mystical rather than physical terms. He passed into another realm, they might say, but they will not acknowledge the full reality of his death.

Third, the Jesus movement grew and flourished based on the certainty of the Messiah’s death and resurrection. Both were witnessed firsthand, and the eyewitnesses became the core of the movement. Not only so, but the New Testament records that at one time, Yeshua appeared to 500 people after He rose.

In contrast, the Lubavitcher movement has splintered, with the large majority of the Rebbe’s followers no longer proclaiming him as the Messiah. In other words, the only way the movement could continue and have credibility was to deny the idea that the Rebbe was the Messiah, since he died before completing his mission and did not rise from the dead.

So, in these three ways, which I develop at length in Resurrection, we have further proof for the reality of the New Testament claims. He is risen indeed! And that’s why He continues to draw followers to Himself 2,000 years after His death. The Jesus movement continues to grow and thrive.