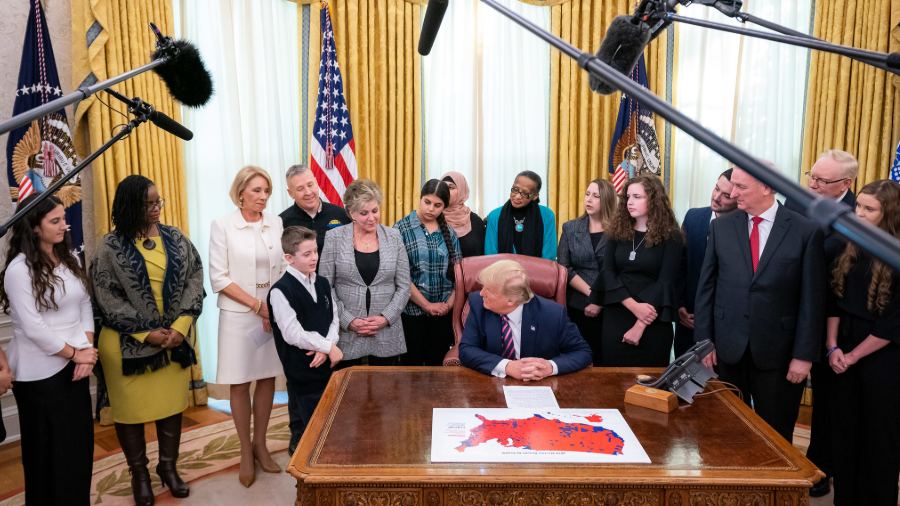 William McLeod, a fourth grader from Utah, tells President Donald Trump that his teacher made him wipe his Ash Wednesday ashes off of his forehead in front of the class. He was one of several students, educators and advocates to speak during the announcement of the guidance on constitutional prayer in public schools Thursday, Jan. 16, 2020.

Students, teachers and advocates of religious freedom surrounded President Trump on Thursday, Religious Freedom Day, as he announced a new guidance on prayer in public school.

“Tragically, there is a growing totalitarian impulse on the far-left that seeks to punish, restrict, and even prohibit religious expression,” President Trump said. “Something that, if you go back 10 years or 15 years or 20 years, it was unthought of that a thing like that could even happen.”

The new guidance, which is supposed to be issued every two years according to U.S. law, had not been issued since 2003. According to the same law, the guidance is designed to express “the current state of the law concerning constitutionally protected prayer” in public schools.

So what’s changed in this new guidance? Overall, it’s much like the 2003 guidance, according to an AP report. But it goes further by requiring states to provide a way for complaints to be made against schools. States must forward complaints to the U.S. Secretary of Education and explain how they are responding to the complaint.

A fact sheet from the White House press secretary states, “The update will help safeguard students’ rights by giving education providers and students the most current information concerning prayer in public schools.” The guidance cites Supreme Court precedent and delineates what is permissible in specific circumstances. It helps students, parents and teachers to understand their rights.

For example, the guidance states that students can pray and read scriptures during non-instructional periods such as recess. They can organize prayer groups. And they can express religious beliefs in class assignments. Essentially, students are free to express their religion to the same extent that they can engage in any other form of conversation or speech. Teachers can also meet with other teachers for Bible studies or prayer whenever they have free time, such as before school or during lunch.

The guidance also says that public schools may not organize prayer at graduation ceremonies. Students who speak must be selected on a “content-neutral” basis. When school officials have substantial control over the content of student speech, it’s considered to be school speech and shouldn’t include religious elements. But when students have primary control over the content of their speech, and choose to pray, that’s okay. Student speech in these circumstances is not considered to be endorsed by the school. The guidance for student speakers at sports events and general assembles is similar.

Secretary of Education Betsy Devos said during the announcement event, “Too many misinterpret a separation of church and state as an invitation for government to separate people from their faith. In reality, our Constitution doesn’t exist to protect us from religion; it exists to protect religion from government. The First Amendment affirms our free exercise of religion, and we don’t forfeit that first freedom to anyone or in any place, especially in public schools.”

Several students and teachers of various faiths spoke during the announcement of the guidance, sharing their stories.

Hannah Allen, a high school freshman from Texas, said she and a group of students prayed for a former classmate’s brother who had been hurt in a car accident. The principal told them, “Don’t do that again.” After receiving complaints from parents, the next day the principal said, in her words, “we had to hide in the gym or behind a curtain, or somewhere away from everyone else” to pray.

Marilyn Rhames, who has taught in the Chicago public schools for 14 years, founded Teachers Who Pray. The schools were losing students every year to gun violence. “One year, it was like 30, 32 students getting killed.” She was overwhelmed with the heaviness of her work. “I thought about quitting, and I decided not to. I was going to fight. And I was going to pray and uplift my spirit so that I can do the job that I knew God had called me to do.” She began praying with other teachers, and the community and spiritual strength they developed brought them joy. She said there’s a myth that what Teachers Who Pray does is not legal. But, she said, “it absolutely is.”