Fox Censors Gingrich for Blurting Out the S-Word (‘Soros’): A Glitch in the Matrix 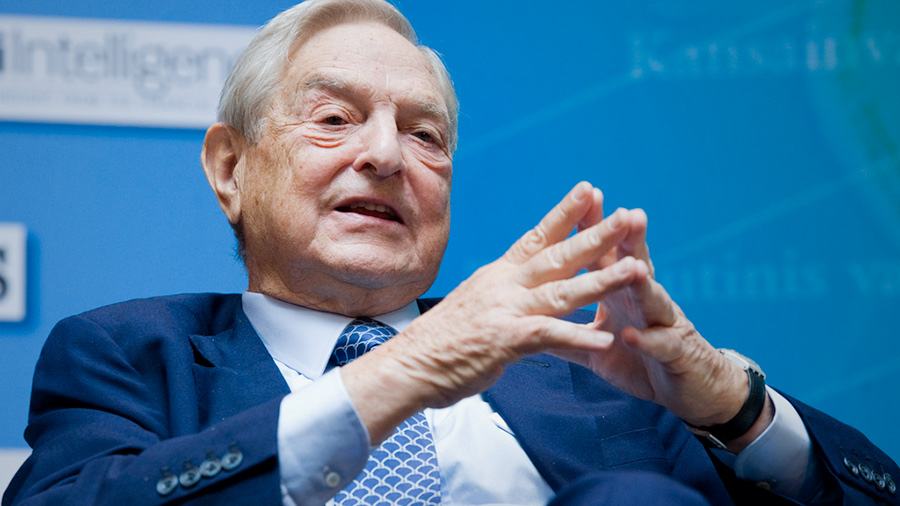 I remember The Matrix fondly. And the halcyon time when the brothers who made that movie hadn’t had their genitals hacked off, and insisted on playing the scariest-looking sisters in show-biz outside Macbeth. I recall how rich the film seemed in potential implications. I even bought an anthology entitled Philosophy and The Matrix. Its essays wondered, learnedly, was the film crypto-Christian? Buddhist? Alt-right? Gnostic?

Parts II and III, alas, answered all those questions like a wet blanket dropped on a child’s flickering birthday cake. They showed us that Part One had meant nothing whatsoever. It just marketed generic paranoia and gender confusion (Keanu Reeves and Carrie-Ann Moss seemed to morph into each other), in the midst of fun action sequences. And “Guns, lots of guns.”

That Innocent Time, the 90s

But that doesn’t ruin Part One for me, or anyone else. We still remember seeing The Matrix when it came out in 1999, before we knew for realsies about the genuine conspiracies out there:

There Are Real Conspiracies, and Crackpot Theories

I really could go on for a while longer, but you get the idea. Because there’s original sin, there are real conspiracies out there. There are also hundreds of crackpot theories that try to connect the dots of random events using the “Lizard Men,” the Freemasons, or the Jews. Or wicked NASA scientists trying to con the world into thinking that it is … round. (To whose possible benefit? we have to wonder. Even the flat-earthers can’t answer that one, the most basic conspiratorial question, “Cui bono?”)

The more ludicrous conspiracy theories are actually kind of fun. Two podcasts I subscribe to, “Conspiracy Theories” and “Stuff They Don’t Want You to Know” offer great entertainment. Except when powerful people take them seriously, as they do the “Systemic Racism” myth. Then you end up with the 1619 Project (The Protocols of the Elders of Jamestown) getting taught in public schools.

Glitches in the Matrix

What is kind of creepy is when you see a conspiracy hiding in plain sight, with abundant real-world, documentary evidence. And then people get punished, silenced, or terrorized for daring to point it out. That’s scary, like watching a real-time, real-world production of Orwell’s 1984, complete with un-personing and a Memory Hole where “bad” facts go to vanish.

It’s creepy when you see a conspiracy hiding in plain sight, with abundant real-world, documentary evidence. And then people get punished, silenced, or terrorized for daring to point it out.

Coming back to The Matrix, there was a great scene in the first film which talked about “glitches in the Matrix.” When the computer-simulated reality that trapped the human race in that film showed a “bug” or “glitch,” repeating itself or showing another anomaly, that meant something. It tipped off the Resistance that an “Agent” working for the AI overlords had been inserted, and was coming to kill them.

When Jeffrey Epstein “committed suicide,” that was a glitch in the Matrix. Likewise when the British establishment pulled out all stops to cancel Brexit. And when prosecutors sent a SWAT team to raid the home of pro-life journalist David Daleiden. And when the leftist prosecutor in St. Louis filed felony charges against the McCloskeys for defending their home with legal firearms against BLM thugs in a state with a “castle doctrine” that explicitly permits that.

Each move was so heavy-handed that it gave the game away. Or would, if the media would let the facts be aired in public. The worst glitches, of course, appear in the media itself. And we saw a doozy this week not on MSNBC or NPR but on Fox News, of all places.

Former U.S. House Speaker Newt Gingrich was talking about the threat of left-wing district attorneys all across the country — like the one that’s persecuting the McCloskeys in St. Louis. He noted the widely-established, not at all secret or uncorroborated fact that globalist left-wing donor George Soros had spent many millions electing these prosecutors. (In 2016, Wikileaks established the sheer scale and range of Soros’ global campaign to promote leftist, Islamist, and anti-Israel politicians around the world. It even exposed Soros’ ties to Pope Francis’ Vatican.)

And Fox News shut Gingrich down. Watch the relevant segment:

What is going on? The Fox anchors reacted as if someone behind the scenes had pushed the button on a shock collar. Or screamed at them in their earpiece. The question is why? Why should it be unspeakable to ask what a foreign billionaire who hates America has in mind picking our prosecutors?

In this case, the tactic was so heavy-handed that it backfired, highlighting Soros’ meddling more effectively than any conservative ever could. But the question remains, why is Fox playing along?

A senior Fox News staffer confirmed to me that the network discourages discussion of Soros which management claims is “anti-Semitic”.

Talking about an atheist who hates Israel is anti-Semitic now.

But Gingrich, who did nothing but point out the accurate information that George Soros proudly and openly funded District Attorney (DA) races across the country, was silenced. For a reason.

Why don’t they want people knowing this, right now?

Because many of these DAs are going to be involved in the election dispute process after November 3rd, we’ve seen it already in the past year when a Surf City DA recused himself after one of his prosecutors spoke at a candidate’s rally.

That candidate went on to face six felony charges, later reduced to just one misdemeanor regarding errors on past voter and campaign forms.

And that brings me right back to the Soros-linked Transition Integrity Project and one of its co-founders, Nils Gilman.

On August 18th, Gilman gave an interview with the left-wing Vox website, and said this of who calls the election night winner in the United States: 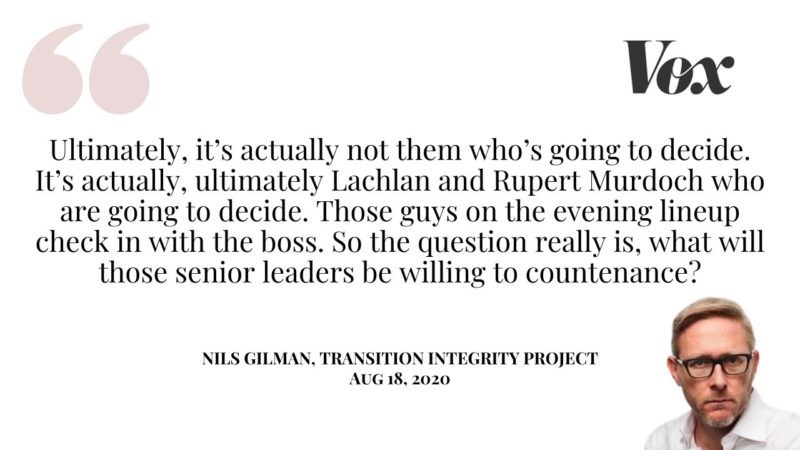 Is that what we saw yesterday from Fox?

Lachlan and Rupert Murdoch making the call that there should be no conversation about George Soros because of his involvement with the coup – the Transition Integrity Project, and the DA races up and down the country?

What They Will Tell Us Election Night

So George Soros is helping to prepare the Democrats’ theft of this year’s election. If they can’t print enough fake mail-in ballots, or terrorize us with threatened riots, they’ll use their Soros-funded network of local officials to legitimize whatever crackpot military plans they have in mind. And use the media to justify it to us all.

You’d think Fox, as a news network, might want to cover that. The fact that it doesn’t really gives me that “glitch in the Matrix” feeling. It’s a cold chill down the spine that reveals the presence of principalities and powers.