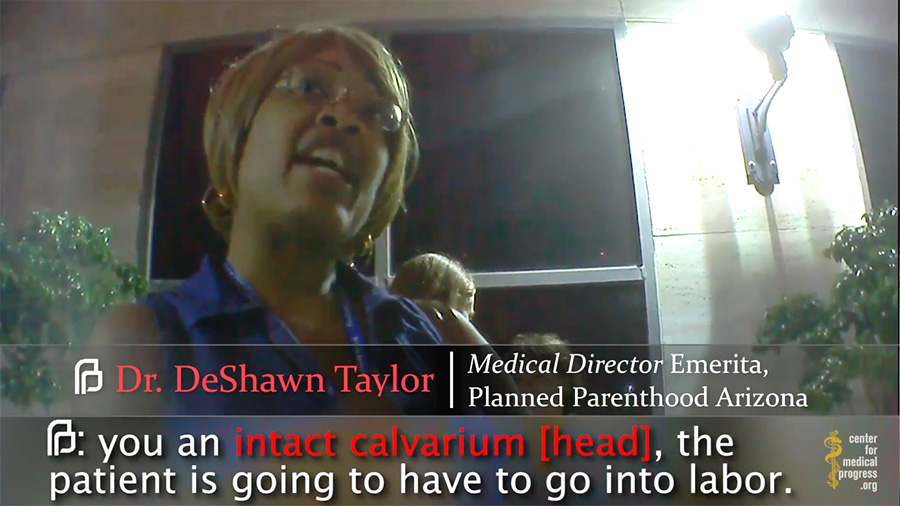 This video comes a day after California attorney general and Planned Parenthood champion Xavier Becerra charged CMP’s David Daleiden with 15 felony counts. Daleiden promised to release more footage, even though there is a campaign to silence him.

This latest video confirms what we knew from earlier videos: Selling baby body parts is a strategy by Planned Parenthood of America to help their affiliates profit.

The new footage shows Nucatola presiding over a boozy reception at a meeting for abortionists. She is happy to connect Daleiden, who poses as a buyer from a biotech company, with Dr. DeShawn Taylor. Nucatola trained Taylor as a former medical director for Planned Parenthood Arizona.

“I get a lot of referrals from Planned Parenthood,” Taylor tells the investigators.

She discusses her “technique” in abortion, and explains that she prefers to deliver fetuses that are dismembered rather than fully intact.

“It’s not a matter of how I feel about it coming out intact, but I gotta worry about my staff and people’s feelings about it coming out looking like a baby,” Taylor said. She agrees with the investigator’s suggestion that this is for her staff’s comfort. She also claims that “Arizona is so conservative, I just don’t even want to send a full fetus for cremation.”

It may be that Taylor herself is not at ease with the intact body of a dead fetus. “We have the people who do our paperwork for the fetal death certificates,” she explains, “they email us calling them ‘babies.’ Baby this, baby that, baby so-and-so, and I’m like, that’s creepy!”

But she knows the law. So, she tells the investigators, “In Arizona, if the fetus comes out with any signs of life, we’re supposed to transport it. To the hospital.” One investigator then asks, “Is there any standard procedure for verifying signs of of life?”

Taylor responds, “Well, the thing is, I mean the key is, you need to pay attention to who’s in the room, right?”

Taylor then describes in grisly detail how she prefers to do abortions. It’s known as dismemberment dilation and evacuation. It requires a drug known as “dig,” for digoxin. The drug kills the fetus before the forceps enter the womb. She says, “My biceps appreciate when the dig works.” Taylor then says that without the drug it takes “a bit more” force to perform the abortion with her forceps.

“I remember when I was a [Family Planning] Fellow and I was training, I was like, Oh, I have to hit the gym for this,” she says.

Taylor’s next admission is the most damning. She explains how delivering an “intact calvarium [head]” requires killing the fetus when most of its body – all but the head – is outside the womb. This is the partial-birth abortion method Nucatola described in the first CMP video.

As the conversation wraps up, Taylor says she’s “definitely interested” in a partnership with the buyer. She assures them that her “market share of the abortion services continues to increase.”

“This footage,” Daleiden says, “shows a longtime Planned Parenthood abortion doctor willing to sell baby parts for profit, use criminal abortion methods to get more intact body parts, and even cover up infanticide.”

He says that Taylor “was trained by Planned Parenthood’s Senior Director of Medical Services and encouraged by her to participate in the fetal body parts market.”

Daleiden vows that this latest video is not the last. It is “just a preview,” he says, “of the damning and incriminating admissions of Planned Parenthood leaders on our further unreleased tapes, being censored by an unconstitutional gag order from a federal judge in San Francisco.”