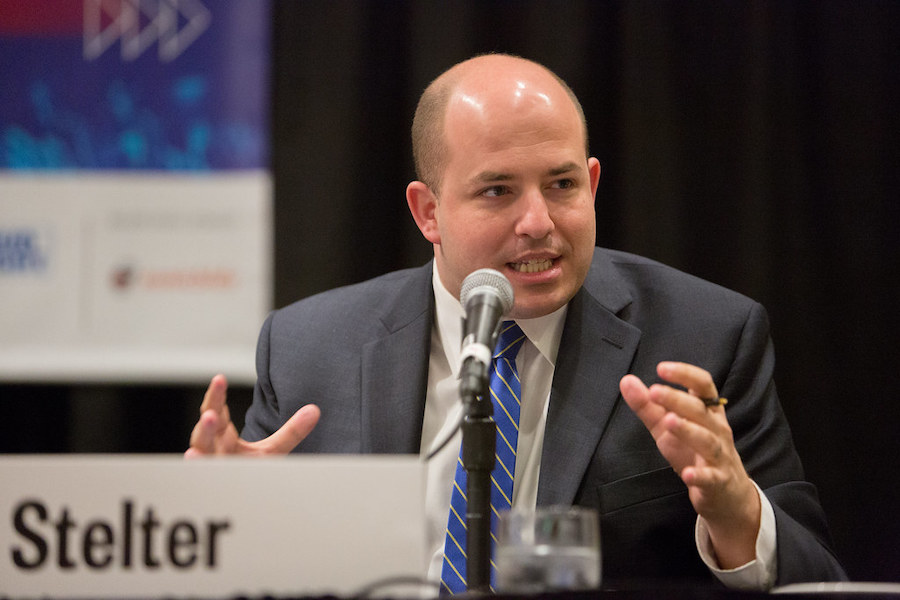 We’ve been following the media career of CNN’s Brian Stelter. In an article about him three years ago, we suggested he might be the most biased journalist in America. CNN’s chief media correspondent claimed to expose fake news, while himself being a big promoter of fake news — as long as it fits the liberal agenda. A lot of people on the right really dislike Stelter because they see his bias against them and President Trump.

We thought we’d catch up with him in a candid interview and see how the past year has gone. In a first ever exclusive, he really opened up and revealed a lot of the secrets to his success.

Q. You cover fake news frequently on CNN. But as we covered previously, you put out a lot of fake news yourself. How do you reconcile that?

A. It’s an art. Oh gosh, I’ve been putting out fake news for years. CNN loves it! They let me spin all I want. They want Trump out of office, so I’ve made fake news about him a priority. I put out the most fake news yet in 2019. It was a good year. My personal best. And look: The type of people who watch CNN don’t realize it’s fake news. They believe anything I say. Did you know the word gullible isn’t in the dictionary? It’s not my fault they believe me.

Q. Your Wikipedia entry is devoid of anything negative about you. But you’ve been involved in all kinds of scandals in your reporting. For years now. How do you keep your Wikipedia page so clean?

Q. How did you get CNN to hire you? How you’d get to host Reliable Sources? At age 34, you’re awfully young to have your own national show.

A. I used to write for The New York Times as a reporter. CNN noticed my writing and thought I  understood the issues (hint: spin) better than anyone. And I started doing it for the Times at only age 22! I’m kind of a prodigy. Some right-wingers accuse me of left-wing bias. You know what I say to them? Truth hurts, dude!

Q. What was your biggest accomplishment of fake news in 2019?

A. Calling out Neil Gorsuch. He went on Fox and Friends to discuss his book A Republic, If You Can Keep It. I tweeted a few days ago, “How is it appropriate for a Supreme Court justice to try to goose sales of his three-month-old book by chatting on one of the most partisan shows on TV?”

Q. But you didn’t criticize liberal Supreme Court Justice Sonia Sotomayor when she went on the very partisan “The Late Show with Stephen Colbert” to promote her children’s books.

A. That was different. She was very gracious in her appearance. Gorsuch wasn’t as warm. It just came across as offensive. He’s a white male. A white heterosexual male. With money. How can you believe someone like that? It really bothered me giving him free media for his book.

A. I’m not a Republican.

Q. You remained silent when a guest on your show claimed President Trump is responsible for more deaths than brutal dictators Adolf Hitler, Joseph Stalin and Mao Zedong. You blamed it on technical problems, but staffers would have been telling you to speak up. Why didn’t you say anything?

A. Well by not combating climate change, Trump is responsible for the deaths of millions. Who knows how many have died because of hurricanes, flooding, etc. How many will die? Thank goodness we have brave activists like Greta Thunberg calling him out and making a difference. She’s only 16 but she knows more about climate change than Trump does. I wish she was the president.

A. Because he is. He wants everything his way. Trump doesn’t like to compromise with the Democrats. He implements unilateral executive orders.

Q. But that’s all within the bounds of a free society. It’s the nature of politics. The Democrats refuse to compromise with him. And Obama loved his executive orders.

A. I don’t care! Trump comes across as authoritarian. He just tells people what he thinks. He doesn’t even listen to us! It’s offensive. And regardless if he doesn’t technically fit the definition of authoritarian, you know the saying if you repeat something false enough, people will start to believe it? We can do this.

Q. What would you like to see happen next year?

A. I’d like to see the Senate remove Trump from office. He stresses me out so bad I can’t take it some days. It literally brings me to tears. I realize as a journalist I’m supposed to be objective, but no one on CNN is objective. Why should I be the exception? You saw that exposé Project Veritas did, revealing undercover video that showed all of CNN’s bias. But it’s okay because we’re right.

A. I’m going to start an anti-Trump PAC at CNN. I’ve got such a large viewership that I know I can raise a lot of money. Why not use CNN’s popular venue to do it?