The Evil of Hamas and the Weakness of the UN 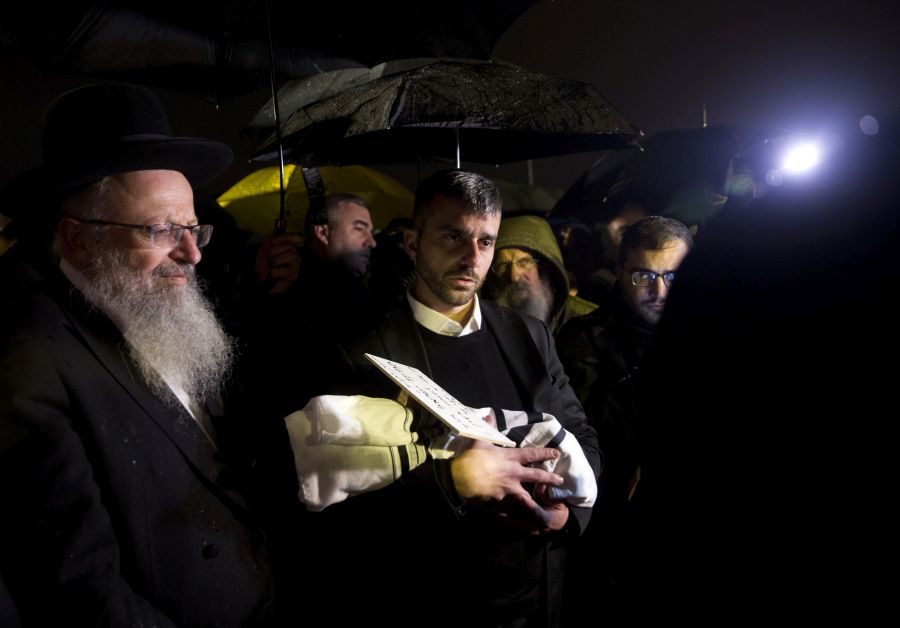 People attend the funeral of a baby who died after being prematurely delivered after her mother Shira Ish-Ran was wounded in a Hamas terror attack near Ofra settlement in the West Bank last Sunday, in Jerusalem, Wednesday, Dec. 12, 2018.

Try to imagine the scene. It’s a Sunday night in Israel, and you’re out with your husband near the Ofra Junction. Just 21-years-old and 7 months pregnant, you can hardly wait to give birth to your child. Suddenly, shots ring out, and you realize you’ve been hit.

You don’t know the condition of the others, but you’ve been shot in the stomach, seriously wounded, and you’re bleeding heavily.

Rushed to the hospital, your mind is racing, but like any loving mother, your thoughts are especially focused on your baby, a boy. Is he alright?

Your husband, it turns out, is in stable condition, but you don’t know that right now. Nor do you know that your baby has been delivered by C-section while you are fighting for your life.

Thankfully, the others were not mortally wounded, and you too will recover. But within the week, your baby will die, the victim of a terrorist’s bullet in a random, drive-by shooting.

What makes this story all the more tragic is that it is absolutely true. Every word of it.

A Child is Murdered, and Hamas Celebrates

Your name is Shira, your husband is Amichai, and your son, now laid to rest, was named Amiad Israel. And the terrorists who shot your baby one week ago are still at large.

Who is responsible for this heinous, murderous act? It is none other than Hamas.

Yet this terrorist organization is making no apology for the shooting of civilians, including teenagers and a visibly pregnant woman, in cold blood. To the contrary, this is cause for celebration.

To quote the official Hamas statement, “The heroic Ofra operation is an affirmation of our people’s choice and legitimacy in resisting the Zionist occupation and its settlers. It proves that any attempt to condemn the Palestinian resistance will fail in the face of the desire and valiance of our Palestinian people.”

This is absolutely sick.

This is as cowardly as it is despicable.

There is nothing legitimate about this act and it is anything but “valiant.”

But this is who Hamas is. It exists to destroy Israel, and if you are a Jew living in the Land of Israel, you are a potential target.

Your death is for Allah’s glory. Your murder, under almost any circumstances, is justifiable.

That’s why one of the terror tunnels dug by Hamas and uncovered in 2014 led directly beneath an Israeli kindergarten. The goal was a mass kidnapping campaign – if not much worse.

And who, exactly, built these tunnels, which, as of 2012, had resulted in the deaths of 160 Palestinian workers? According to a detailed report published by the Institute for Palestine Studies, some of the builders (including those who died) were children. In the tunnels, we are told, “much as in Victorian coal mines, they are prized for their nimble bodies.”

To repeat: This is who Hamas is and this is what Hamas does.

And the UN is Silent

Yet the UN is so morally compromised when it comes to Israel that it could not muster sufficient votes to condemn Hamas.

As reported by Reuters on December 6, “A U.S. attempt to get the United Nations to condemn violence by Palestinian militant group Hamas for the first time failed . . . because the draft resolution fell short of votes needed in the General Assembly.

“The resolution required two-thirds support and while Assembly resolutions are non-binding, they can carry political weight. The U.S. text received 87 votes in favor, 58 against, 32 abstentions and 16 countries did not vote.

“In an earlier procedural move requested by Kuwait, the 193-member body narrowly voted to require two-thirds support and not a simple majority for adoption of the draft resolution.”

Just three days later, on Sunday, the 9th, and almost as if empowered by the UN’s cowardice, the shooting took place in Ofra Junction. On Tuesday, the 11th – meaning, within one week of the UN’s failed vote – the baby was dead.

Shame on the UN for its failure to condemn Hamas as a terrorist organization.

And shame on Hamas for its cowardly, murderous acts.

May the Lord bring comfort to the grieving and repentance and justice to the guilty.