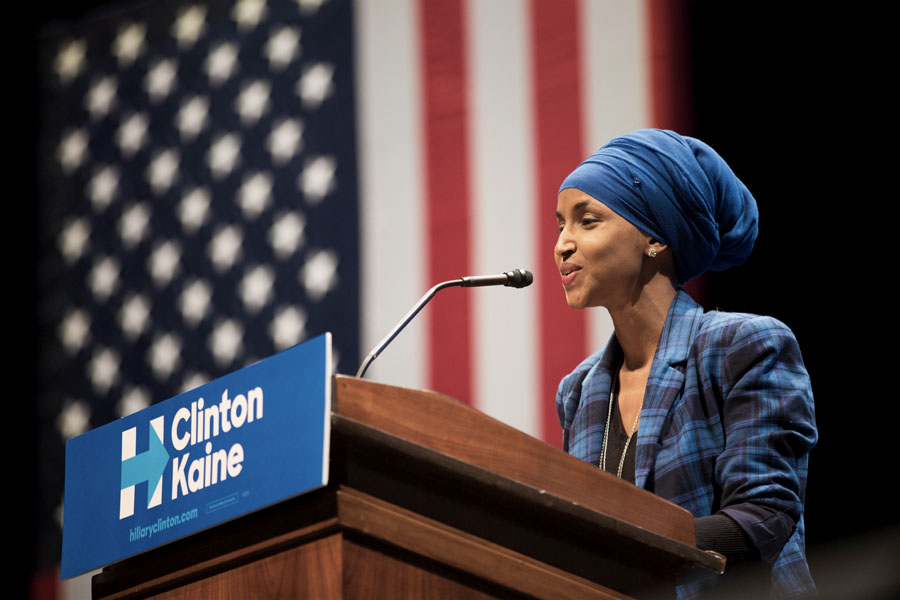 Keeping track of openly anti-Semitic Minnesota Rep. Ilhan Omar’s convoluted marital history is almost as hard as keeping up with the players in the “Trump/Russia” investigation. And now, in what appears to be a case of marriage/immigration/loan fraud and perjury, it’s gotten even more complicated, just as critics zero in on the question of whether or not she married her own biological brother.

Rep. Omar has reportedly just split from her on-again, off-again husband (and non-brother) Ahmed Hirsi. She first married Hirsi in a religious ceremony in 2002 and divorced him in 2008. Now she lives husband-free in a penthouse apartment in one of Minneapolis’ trendiest neighborhoods. (What a coincidence: Alexandria Ocasio-Cortez is living in one of the trendiest areas of Washington, D.C. Funny how those high-minded and non-materialistic socialists gravitate to trendy digs and expensive designer clothes. I digress.)

The DailyMail caught up with Hirsi and asked him about their relationship, but he shed no light on the story. In fact, he said, “Wow, I can’t comment on that. I’m sorry, I just can’t say anything.”

Judicial Watch has announced that it hand-delivered an ethics complaint to David Skaggs, chairman of the U.S. House of Representatives Office of Congressional Ethics, calling for a full investigation by the House into potential crimes associated with the alleged marriage to her brother. “The evidence is overwhelming Rep. Omar may have violated the law and House rules,” it said. It also urged Americans to share their views on Omar’s apparent misconduct with their own congressional representatives. That sounds like a good idea to me. But as long as Democrats — “the Squad” in particular — are running the show in the House, we know exactly where any internal investigation of Omar is going to go: NOWHERE. It’ll take either a federal investigation (including an IRS audit) or a transfer of power in 2020 to get any traction on this.

The full complaint from Judicial Watch states that “substantial, compelling, and, to date, unrefuted evidence has been uncovered that Rep. Ilhan Omar may have committed the following crimes in violation of both federal law and Minnesota state law: perjury, immigration fraud, marriage fraud, state and federal tax fraud, and federal student loan fraud.” It also points out that all federal officeholders are subject to the Code of Ethics for Government Service, meaning essentially that officeholders are required to follow the Constitution and the law.

This is serious business, with serious criminal penalties. According to investigative reporter David Steinberg, who has spent the past three years meticulously looking into this case, “The facts describe perhaps the most extensive spree of illegal misconduct committed by a House member in American history.”

It’s also got to be the most complicated. Here’s one example of alleged perjury associated with Omar’s marriage and divorce, as pieced together by Steinberg:

Rep. Ilhan Abdullahi Omar, a citizen of the United States, married her biological brother, Ahmed Nur Said Elmi, a citizen of the United Kingdom, in 2009, presumably as part of an immigration fraud scheme. The couple legally divorced in 2017. In the course of that divorce, Ms. Omar submitted an “Application for an Order for Service by Alternate Means” to the State of Minnesota on August 2, 2017, and claimed, among other things, that she had had no contact with Ahmed Nur Said Elmi after June 2011. She also claimed that she did not know where to find him. The evidence developed by Mr. Steinberg and his colleagues demonstrates with a high degree of certainty that Ms. Omar not only had contact with Mr. Elmi, but actually met up with him in London in 2015, which is supported by photographic evidence. Ms. Omar signed the “Application for an Order for Service by Alternate Means” under penalty of perjury. The very document that Ilhan Omar signed on August 2, 2017, bears the following notation directly above her signature: “I declare under penalty of perjury that everything I have stated in this document is true and correct. Minn. Stat. § 358.116.”

There is documentary evidence that Omar lied under oath about having contact with Elmi — photographs taken with him during a trip to London in 2015. Omar has not been forthcoming with information about Elmi. She has even refused to provide a list of her siblings, which seems like a pretty simple task to me. And you may have seen the video of Omar walking down the hall to her office as a reporter asks her about the matter. She looks straight ahead, expressionless, saying nothing.

Actually, the allegation that Omar married her brother and committed perjury to divorce him is just one aspect of the potential fraud. It’s immigration fraud if their phony marriage helped him emigrate to the United States from Britain. And it’s loan fraud if their phony marriage helped him obtain federally-backed student loans to attend North Dakota State University. Both Elmi and Omar attended NDSU. In fact, their attendance at the school overlapped during the time she has sworn they had no contact.

Oh, wait, there’s more. It has already been determined that Omar broke campaign finance laws with her improper use of campaign funds. She had to reimburse her campaign thousands of dollars. She also, in 2014 and 2015, filed joint federal tax returns with a man who was not then her legal husband, while she was actually married to Ahmed Elmi.

With Omar’s condescending attitude towards America — the country that took her in and raised her to the position of U.S. Congresswoman — it’s not surprising that she wouldn’t care one bit whether or not she followed our laws. Now that she’s in a position of power, she’d much rather look down from her ivory tower and serenely inform us of what WE must do to stay in line with her ideology. (And anyone who criticizes her or anyone “of color” is a racist.) Sorry, but it is she who has a lesson to learn about justice, and if the evidence against her is consistent with the reports we’ve seen, the place for her to learn it is most certainly an American court of law.

As long as you’re visiting the Judicial Watch website, check out what they’re doing to expedite the release of more Strzok-Page documents. Yes, there are MORE, and there’s no telling what they will reveal about the FBI investigation into Trump, so thanks to Judicial Watch for staying with it. Unbelievably, only 6,000 of the almost 20,000 emails, texts and other communications between Strzok and Page have been processed since May of 2018. But now, a U.S. district court judge has scheduled a hearing for Tuesday to find out why this has been like waiting for the Heinz ketchup to come out of the bottle.