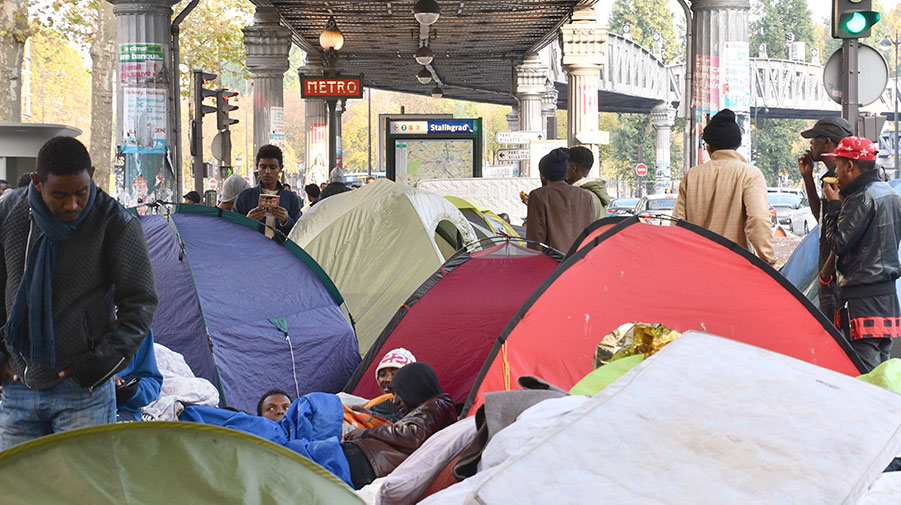 A view of a tent camp where Sudanese refugees who had arrived from Italy live in, near the Stalingrad Square in Paris, France on October 26, 2016. About two thousand refugees live in tents and streets around the square.

The European refugee and immigrant problem worsens. The reason: European countries have not faced the problem of radical, aggressive Islam. In fact, they’ve been letting Muslim immigrants in without screening out the radicals. They’ve been asking for trouble.

In some places, people fear going into “no-go zones,” where violent young Muslim men walk the streets. In France, for example, Jews can’t safely walk in parts of Paris, Marseille and Lyons. French Jews are warned not to speak Hebrew in public or to wear anything identifying themselves as Jewish, like a yarmulka. Some men have been beaten in the streets for wearing them.

Other groups have suffered as well. Some men have brought their culture’s abusive idea of women. Women are afraid to walk or jog alone due to the increase in rapes. Officials even warn women not to show too much skin or they may be attacked. In other words, Muslim men are allowed to infringe on their right to dress as they please. The government’s only answer is “Let them.”

People’s rights are being over-ridden in other places. Reportedly, close to 150 schools in the United Kingdom now require girls to wear hijabs, because the schools serve mostly Muslim areas. Even Christian girls must dress as if they’re Muslim. The U.K. has its own no-go areas, supposedly public places most of the public can’t enter.

In the last few years, Germany has been one of the most welcoming countries for Muslim refugees. German Chancellor Angela Merkel said in 2010 that multiculturalism had “utterly failed.” That did not stop her from opening Germany’s borders to Syrian refugees in 2015. She even ignored a European Union rule instructing countries to deport them back to their own country. Obama praised her in 2016 for being on “the right side of history” with her open-border immigration policy.

But was she? After she opened the borders, violent crime increased by 10 percent during 2015 and 2016. More than 90 percent of the increase is attributed to young male refugees. The study, published by the Zurich University of Applied Sciences, found that it is due to the refugees coming from Muslim countries. These countries are characterized by “male dominance” and an acceptance of a “macho culture” that justifies violence.

One result: The violence reached tragic levels with the 2015 New Year’s Eve molestation and rapes in Cologne and the Berlin Christmas market attack in 2016. Another result: Even Merkel now admits that there are no-go zones in Germany.

Sweden has also been unusually welcoming to Muslim refugees. The country’s foreign minister, Margot Wallström, claims that her country has a “feminist foreign policy.” According to the Swedish government, 71 percent of all applicants for asylum to Sweden in 2015 were male. More than 90 percent of alleged “unaccompanied minors” are male. How is letting more male than female refugees into the country feminist? Especially when so many commit violence against women?

Why Is This Happening?

European political correctness has brought this about. Afraid to look like they were discriminating against Muslims, political leaders made no real effort to screen refugees. They didn’t work hard enough to find out who was associated with radical Islam.

Many proved to be unassimilable. Or at least unwilling to assimilate. That would mean accepting Western laws, including respecting the rights of women, Jews, and others.

Many are not only unwilling to give up their home culture. They actively oppose Western culture. Cheryl Benard, writing for The National Interest, says an Afghan translator told her that young Afghan immigrants “are motivated by a deep and abiding contempt for Western civilization.” They see Europeans as the enemy and their women as the spoils. They believe European civilization will fall. Europe will become Muslim. England, France, Germany, the other countries — Islamic theocracies will replace their governments.

Part of the proof? The Europeans are too weak to crack down on them. They see that European governments could stop this from happening. But they don’t. They seem to encourage it. Why else, they ask, would those countries let in so many radical Muslims?

It’s a good question. Unfortunately, those who point out the incompatibility of radical Islam with Western civilization are labeled racist. They’re declared guilty of discriminating against Muslims. The reality? The radical Islamists discriminate against Europeans by forcing them to conform to their standards and behavior. Until Europe begins screening out the radicals, their numbers and associated violence will continue to increase.

Multiculturalism needs assimilation. Newcomers have to fit in. That includes respecting their new home’s laws, even when those laws conflict with their home culture. Many immigrants and refugees do that, of course. But the radicals won’t. Without assimiliation, Europe’s generosity will end in civil war.