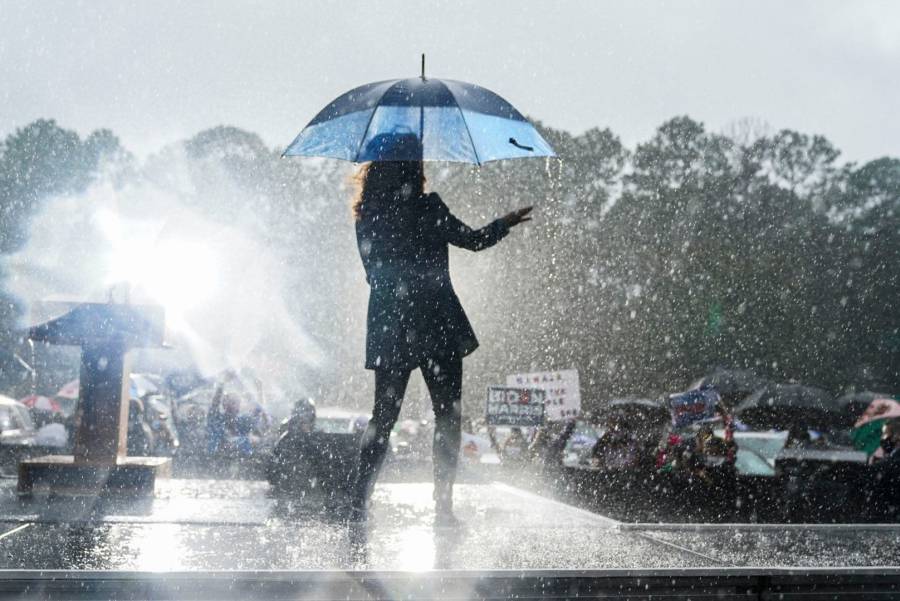 So what is the state of the presidential race between Donald Trump and Kamala Harris, 12 days out from the election?

Yes, I said “Kamala Harris.” After all, who am I to argue with Kamala’s husband?

Watch for yourself, as Doug Emhoff enthusiastically declares “I am married to the next President of the United States!”

It’s not like this is a surprise. Kamala herself has talked about the “Harris Administration.” Biden himself has spoken of the Harris-Biden ticket.

Still, Harris may want to hold back on counting the ways to push Joe aside. First, she has to figure out ways to get more than a handful of people to show up at her events.

This is a Kamala Harris event this morning in North Carolina.

You see more people waiting for their orders at a deli counter at Food Lion.

Meanwhile, this is what Donald Trump enjoyed in Johnstown, Pennsylvania, last week.

What’s got to worry Democrats isn’t just the size of the crowds. Or their enthusiasm. (Then again, even Joe Biden isn’t enthusiastic about being at Biden events.) The Washington Examiner looked at the GOP data from the 13 rallies Trump has held before Wednesday. In total, about 167,000 participated. But 25% were new voters. And a staggering 30% were not Republicans.

Of course, there’s no way to tell how many are there just to see him dance.

LAST NIGHT: President Trump dances to the Village People's "YMCA" at the conclusion of his rally in Erie, Pennsylvania. pic.twitter.com/2JpcR4NMj2

The RealClear Politics average of polls insists Biden is up 7.6 points nationally. But that factors in polls with data going back to October 7. (And, of course, polls skewed Democratic.)

An IBD/TIPP daily presidential poll out Wednesday shows a race a virtual dead heat. Biden is up by 2.5, 48.5-46% among likely voters. The poll shows Trump is gaining support. Biden is losing support. It also indicates Republican stragglers are joining Team Trump. Not so many Democrats are climbing aboard the Biden-Harris train.

Meanwhile, the chief pollster for Trafalgar, who called Trump’s surprise win in 2016, has Trump winning again. Robert Cahaly told Hannity Tuesday night there’s a “hidden vote” for Trump that other pollsters are not accounting for. He predicts Trump will collect an Electoral Vote in the “high 270s and possibly going up significantly higher.” A candidate needs 270 to win.

Said Cahaly, “There is a clear feeling among conservatives and people that are for the president that they’re not interested in sharing their opinions readily. These people are more hesitant to participate in polls. So if you’re not compensating for this, you’re not going to get honest answers.”

The Debate: Not Just About the Laptop

Thursday night’s debate will obviously factor into the race. Yesterday, we put forth the notion that the stars are aligning against Biden for the debate. That this time out Biden doesn’t just have to beat back Father Time and Donald Trump, he also has to beat back the continued revelations about Biden, Inc.

Still, Mike Huckabee is advising Trump to not focus much on the Hunter laptop revelations. Deal with the issues that matter in people’s lives, he says.

And it looks like the Democrats are handing Trump such an issue on a platter. The Heritage Foundation has laid out how Biden-Harris, if elected, will undo Trump immigration policies, particularly in relation to illegal immigration.

On Tuesday, Houston police officer Sgt. Harold Preston was murdered, just one week away from retirement when answering a domestic call. On Wednesday, ICE revealed that Sgt. Preston’s suspected killer was a “convicted criminal alien who is unlawfully present in the U.S.”

Put on top of that, the Democrats’ war on police and Trump doesn’t have to spend so much time talking about Biden, Inc.

He’s been handed a case study in how Harris-Biden will endanger the life of Americans and America’s peace officers.

Speaking of police officers, a beautiful scene emerged after a Trump rally Tuesday. A retiring police officer named Joel gave his badge to the president. “Can I give this to you, sir?” the officer asked Trump. “I’m retiring in 12 days and my last act as a police officer, sir, is that I want to give you this on behalf of all the men and women who wear the badge who have your back because you have ours.”

“You’ve got to be kidding me!” replied Trump, clearly taken aback.

I had the honor of closing out my career as a police officer by gifting my flat badge to @realDonaldTrump for his unwavering support of law enforcement throughout his presidency. @PressSec pic.twitter.com/16HCXlWcRG

Finally, a Media Figure Gets Mad At Kamala for Ducking Questions

Finally, we return to would-be President Kamala Harris. Since getting the VP nomination Harris has refused to answer questions from the reporters traveling with her. You want transparency in government, Harris is not your candidate. Like Biden saying you don’t deserve to know his position on court packing, Harris doesn’t think reporters deserve to even ask questions she doesn’t like.

For months, the mainstream media has been playing along. Until last night.

Last night, Kamala Harris attended a fund-raiser featuring the cast of The Avengers. There, she answered questions from the assorted actors. ABC’s Jonathan Karl was not pleased.

At a fundraiser tonight, @KamalaHarris played trivia and answered questions from the cast of The Avengers.

And with that, the Democratic VP nominee has now taken more questions from cast of The Avengers than from the traveling press covering her campaign. (h/t @MissBeaE)