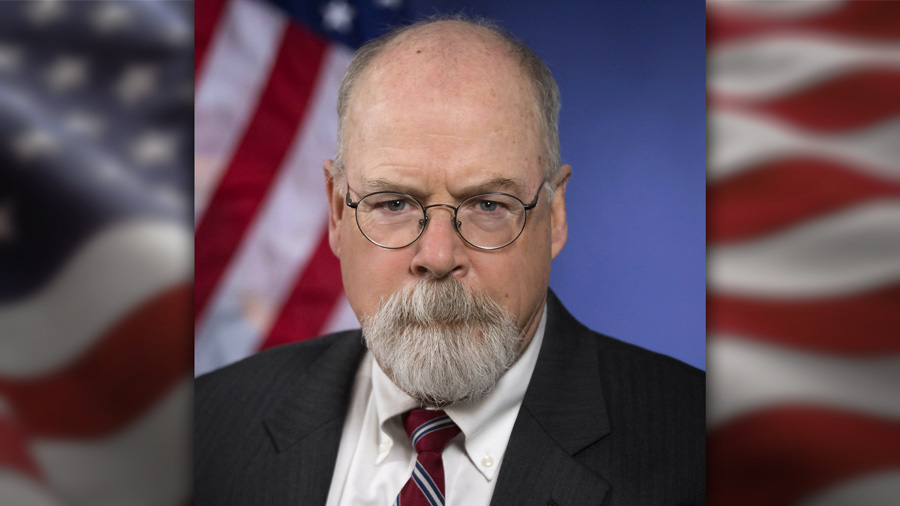 Clinton attorney Michael Sussmann is scheduled to go to trial on May 16.

Sunday Morning Futures host Jason Chaffetz brought this up with Arizona Rep. Andy Biggs of the House Judiciary Committee for a brief discussion of Durham’s case. “I’m not sure that the Clinton campaign folks or the Democrat Party wants to see this go trial, and air their dirty laundry even further,” Biggs said.

That’s surely one reason why Sussmann’s attorneys, of the DNC-connected law firm Latham and Watkins, have been trying so hard to get evidence excluded from the trial as “immaterial” to the case. It makes their clients and friends look very, very bad.

John Durham Has Been Busy

Chaffetz ran out of time before they could discuss what the screen graphic said: “Durham: CIA concluded data from Clinton lawyer alleging Trump-Russia connection was ‘not technically possible.’” So we’ll get to that today.

First, in case you missed our Sussmann update over the weekend, featuring the judge’s latest ruling on materiality (in favor of Durham), here’s a link to that.

The Epoch Times has an update on Durham’s latest filing. It’s a “premium” article, so here’s the link but also a summary and comments below.

Durham had already included in his filings that Sussmann, on September 19, 2016, met with FBI general counsel James Baker and lied to him about why he was there. He was actually representing clients Hillary for America — Durham has the billing records — and tech executive Rodney Joffe, but said he was not representing clients, instead coming forward on his own, out of his sense of duty. (Good grief; that outrageous whopper is getting harder and harder to stomach every day.)

The FBI later determined his Alfa Bank story was not supported by the facts. But in a new filing on Friday, Durham says that several months later, on February 9, 2017 — after Trump was President, I would note — Sussmann brought another fake Trump-Russia story to the CIA and lied again.

Here’s the document, a CIA memorandum from that meeting, that Durham wants admitted into evidence at trial.

This was a bogus story he had facilitated, yet he’s presenting it to the CIA as a discovery by courageous people who are coming forward at “some personal risk” and “under threat by Russian Intelligence Services.”

From the memo, we learn that Sussmann had already “reached out” to the CIA general counsel, in mid-December, but had had no response though she’d said she’d be in touch “after some coordination with the FBI.” Not to be dissuaded — he was a man on a mission — he had reached out again.

“Mr. Sussmann advised that he was not representing a particular client and the information he was volunteering to us was not privileged,” the memo states. “His contacts wished to provide information to the USG [U.S. government] through Mr. Sussmann, preferring anonymity citing a potential threat from the Russian Intelligence Services.”

Mr. Sussmann said that he believed his contacts were acting in good faith and out of a sense of loyalty to the USG…He was up-front in disclosing that his law firm was active in supporting several democratic causes and office holders including both the DNC and then-presidential candidate Hillary Clinton, but that such work was unrelated to his reasons for contacting the CIA. He merely wanted to pass along information that he thought would be of interest to the USG and then let the CIA and FBI validate the information and take whatever actions they believed were necessary.

Read on in the filing about how he presents the story itself, and it’s hard not to just be angry. This was a bogus story he had facilitated, yet he’s presenting it to the CIA as a discovery by courageous people who are coming forward at “some personal risk” and “under threat by Russian Intelligence Services.” The implication is that this information is so sensitive, they’re risking their very lives. What they (including him) should be risking for what they did is a long time behind bars.

Sussmann apparently couldn’t even keep his stories straight. He spoke with another CIA employee in January, who also wrote a memo: “Sussmann said that he represents a CLIENT who does not want to be known, but who had some interesting information about the presence and activity of a unique Russian-made phone around President Trump.” (Of course, that story was bogus as well.)

In a section of that memo about “the client,” it seems to be describing Rodney Joffe: “Sussmann would not provide client’s identity and was not sure if he would reveal himself…the client is an engineer with a number of patents, and is most likely a contractor [as] Sussmann claimed the client had very sensitive access to various projects.”

“…[Sussmann] claimed his client did not want to provide this to the FBI, as he knows that the FBI did not have resources to deal with these issues, or perhaps since Sussmann is openly a Democrat and openly told [redacted] that he does lots of work with DNC, did not trust the FBI.”

“Sussmann said that…if there is no interest…[his client] would most likely go to New York Times.”

Sussmann’s lawyers are trying to keep the further evidence of his lies out of court, saying their client’s statement to the CIA “cannot possibly be part of the charged offense (concerning a single, different statement), and it was not made contemporaneously with the charged crime.” As I like to remind my readers, I am not an attorney, but it seems that Sussmann has lied so much, he could just be charged with those other lies, too. Bring on all the evidence!

His lawyers also point out that what he told the CIA wasn’t to help Hillary become President, because “the election was long since over.” You bet it was over — by then, Sussmann was trying to unseat a sitting President.

If you care to read their filing, you’ll see how desperately they’re trying to keep this evidence of Sussmann’s additional lying out of the courtroom.

The CIA later found that Sussmann’s story about the Trump-Russia connection was “not technically plausible” and…(wouldn’t this be criminal?)…“user-created.” Of course, special counsel Robert Mueller never found “illegal or criminal coordination” with Russia, either.

Durham’s filing also reveals he’s seeking immunity for someone who worked at Fusion GPS, identity not given. Another witness, “Researcher – 2,” who is David Dagon of Georgia Tech, was granted immunity even before Sussmann was indicted. Durham said he’d immunized “Researcher – 2” because five others involved in the plot had invoked their Fifth Amendment rights.

Sussmann’s attorneys are seeking immunity for Joffe, but Durham’s filing reveals he’s a subject of the investigation and “played a critical leadership role in assembling and submitting the allegations at issue,” so, no immunity for him. The defense is also trying to keep the Steele “dossier” out, but Durham said that evidence is “highly probative” because it establishes Sussmann “represented and worked for the Clinton campaign with its broader opposition research efforts.”

“The fact that FBI headquarters received on the same date both sets of information involving the same political campaign (Clinton campaign), the same law firm [Perkins Coie], and the same investigative firm [Fusion GPS] makes Steele’s involvement in these matters relevant.” You bet it does.