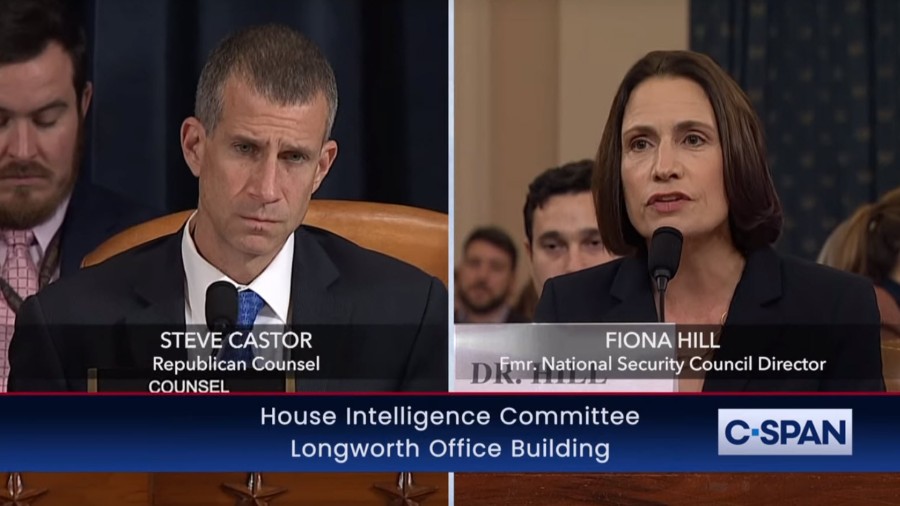 We watch the hearings so you don’t have to!

Of course, even if you can’t stand to watch another minute, there’s still some informative reading material — including this newsletter, of course — and I hope you’ll keep abreast. For example, what we’re learning about Dr. Fiona Hill, one of Thursday’s two witnesses in the Schiff-sham “inquiry” hearings, gives reason for pause.

Democrats are supporting this “inquiry” process, such as it is, partly because of the perceived caliber of the witnesses. They’re impressed by resumes, uniforms and emotion. So let’s go deeper and ask, “Who is Fiona Hill?” You might find it interesting that she’s an acquaintance of British ex-MI6 agent Christopher Steele, purportedly the author of the “Steele dossier.” According to Politico, after that fictionalized report on Trump was published by Buzzfeed in 2017, she told friends that she was impressed with Steele, particularly his intellect.

To her credit, in Thursday’s testimony she called the dossier a “rabbit hole” and said Steele had been used for political purposes. (I think the IG report, due December 9 with “previews” already coming, will bear this out.) She also rightly said that Russia’s purpose was not to favor a particular candidate but to delegitimize whoever won and also to cause disunity among Americans. (Putin must be very happy now.)

Dr. Hill Says If You Don’t Like Geoge Soros, It’s Because You’re a Jew Hater

But check out the questioning towards the end of the afternoon by Democrat Rep. Raja Krishnamoorthi, who aimed to establish that Republican “crackpot” conspiracy theorists, starting with Roger Stone and Infowars and “fueled by Rudy Giuliani and others,” had attempted to tie Dr. Hill with George Soros, whom Stone had characterized as a “globalist leftist.” (Um, he is one, and she does have ties to him.) The congressman read back part of Dr. Hill’s testimony about similar attempts made against Marie Yovanovich, in which she’d said, “…this is, again, just this whipping up of what is frankly an anti-Semitic conspiracy theory about George Soros, to basically target non-partisan career officials.”

That’s right, those of us who question the connections of witnesses to the likes of George Soros are anti-Semitic and target him because he is of Ukrainian-Jewish descent. What other possible reason could there be? Dr. Hill stunningly agreed with the congressman that those criticizing Soros “basically have a tinge of anti-Semitism at least.” I’d say that, given the projects in America that he supports with his billions, we don’t have to be wearing tinfoil hats to view him with great suspicion. Yet, unbelievably, they were sitting there in that hearing room calling Soros’ critics crackpots and Jew-haters. Dr. Hill went on stridently defending Soros in a way that must have caused all committee Democrats to simultaneously think, “How do we shut her up?”

Dr. Hill went on stridently defending Soros in a way that must have caused all committee Democrats to simultaneously think, “How do we shut her up?”

“I’d just like to point out,” Hill said, “that in the early 1900s the Czarist secret police produced something called The Protocols of the Elders of Zion, which actually you can still obtain on the Internet, and you can buy it actually sometimes in bookshops in Russia and elsewhere. This is the longest-running anti-Semitic trope that we have in history, and the trope against, uh, Mr. Soros — George Soros was also created for political purposes. And this is the new Protocols of the Elders of Zion … an absolute outrage.”

Whoa, this was pretty scary. I think it tells us all we need to know about Dr. Hill. She’s the sort of person who believes that if we have a problem with what George Soros is doing, as conservatives generally do, well, we just hate Jews. (The book she references is a fictionalized book about Jewish world domination that was used by the Nazis to justify persecution of Jews.) I’m not sure what any of this questioning has to do with the issue Trump’s supposedly being impeached over, but it tells a lot about the people at odds with him.

The Washington Examiner noted that, curiously, Dr. Hill said she couldn’t remember the name of the person who was Ukraine director when she joined the White House. This is something she surely would have known, considering she worked with him. That name was … (drum roll please) … Eric Ciaramella, the (“alleged”) “whistleblower.”

I guess we’re also crackpots if we note that Dr. Hill has at least some connection to Adam Schiff himself. Both attended a July 2017 conference of the Aspen Institute Security Forum, where she was a speaker. The following year, when Schiff attended the conference, Glenn Simpson of the slimy “oppo research” firm Fusion GPS, which essentially paid Steele for the dossier with funds from Hillary an the DNC, was there.

Though attendance at the same events certainly doesn’t in itself prove they were actively conspiring in some way, it does set the scene by showing the circles in which these people travel. These are many of the same people who were involved in the FBI’s Trump/Russia hoax. Why, there’s even Josef Mifsud, the Maltese professor who is alleged to have approached George Papadopoulos as a confidential informant. Mifsud, along with his Russian contact Ivan Timofeev, attended a conference of the Russian Valdai Club. Dr. Hill was there, under the auspices of the Brookings Institution, where she’s been a senior fellow and program director for many years.

More: Her work at Brookings was done under the leadership of Strobe Talbott, a long-time Clinton crony who headed that institution until 2017. Talbott is known to have received a copy of material compiled by another Clinton crony, Cody Shearer, and later used as part of the Steele dossier. Again, I’m not spinning a wild conspiracy tale, just showing the “bubble” in which many in these institutions and think-tanks dwell.

Stacey Lennox at the NOQ Report was as curious as I was about Dr. Hill’s background, and has delivered a report that I think is a must-read. No wonder Schiff thought she’d be a good witness for the impeach-Trump crowd.

A Small Whiff of Schiff

In Schiff’s extremely long closing remarks, he thanked both witnesses for their testimony and long years of service, saying (try not to laugh), “You’re not Democratic witnesses, you’re not Republican witnesses, you’re non-partisan witnesses, and you have stuck to the facts, and that is how it should be.” Then, as Dr. Hill had done in her testimony, he once again disparaged the idea of a “Russia hoax” — misrepresenting what we mean by that term. What he went on to say was such a stinking pile of mule droppings and had so little to do with pertinent facts, I feel that as a public service I need to spare you from having to smell it.

But here’s just a small whiff of Schiff: He condemns Republicans for “smearing” witnesses and then spews some of the worst smears I’ve heard, saying Trump is far worse than Richard Nixon, for withholding aid to an ally (which he did not do). Even Schiff has outdone himself here, going lower than ever before, with even more outrageous lies and a new emotional intensity that tells me he knows they haven’t got anything, after all this. Either that, or he’s going for an Academy Award, which, knowing Hollywood, he might get. Though he did get applause in the room, what he really needed was dramatic music behind it, lots of strings. Find it online if you want to. But be sure not to eat first, and for at least four hours afterward, to minimize nausea and cramps.

Heres something you should see: ranking member Devin Nunes, clearly tired and disgusted, with his closing remarks: