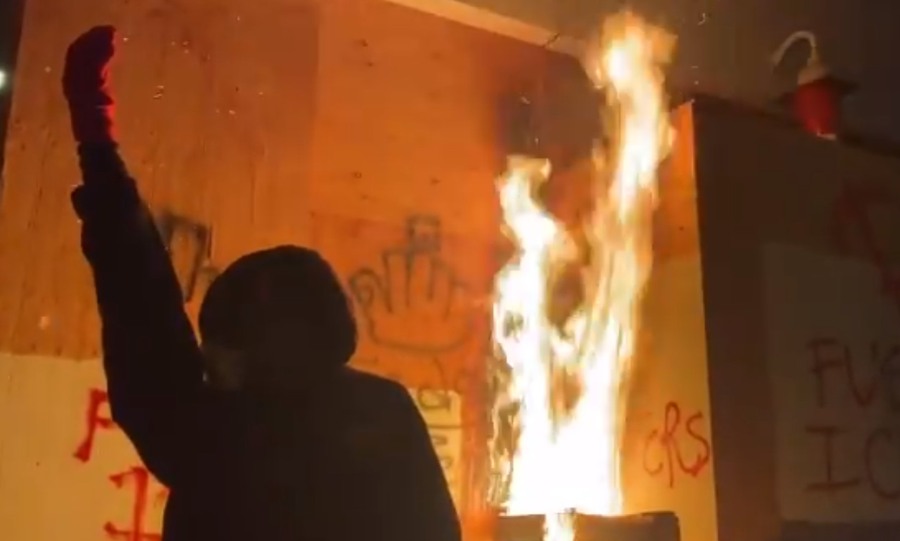 Yesterday, we ran a commentary about a story that I predicted would receive little news coverage, a vicious attack on the ICE headquarters building in Portland. I anticipated that it would receive scant attention because 1) it happened late Saturday night/early Sunday morning, and 2) it busted the fake leftist narrative of Antifa being a group of peaceful protesters while the real “domestic terrorists” were Trump supporters.

As it turned out, I was correct in thinking the story would be ignored. If it was covered even on Fox News, we missed it. The lack of coverage was even worse than I’d predicted because yesterday’s news was dominated by breaking stories of violent encounters with law enforcement that had been automatically interpreted as — what else? — racist. That’s because, apparently, there is no other possible reason for these confrontations to end in violence. (Please don’t take this to mean I’m excusing the cops for these tragedies.) And once again, rioting and looting were breaking out in Minneapolis.

Anyway, the story of Antifa/BLM barricading the front door of Portland’s ICE headquarters with agents inside and setting the building on fire was indeed buried about as deep as it could go.

The one commentary I saw Monday in American media was from Tyler O’Neil at PJ Media, and his headline describes what happened in the same way I had, calling it “attempted murder.”

O’Neil includes some additional tweets that went out that night, such as this one early on from independent journalist Grace Morgan: “Parts of the fence around the ICE facility in Portland OR have been dismantled by protesters and laid against the main entrances. Federal agents get on the loud speaker & warn not to trespass, including press.”

She’s referring to the chain link fence that was pulled up and used to block the front door, preventing agents from getting out of the building that way.

Recall that Andy Ngo tweeted that the officers were “trapped inside when Antifa set the building on fire.”

ICE Agents On Their Own

Agents were able to get out of the building through a back exit. It’s likely they’re alive only because fire did not block their exit through that door. Apparently, they were on their own; from tweets that were going on throughout the night, we know that the cops — federal police in riot gear — did not even get there till just before 2 a.m.

According to the Daily Mail, the British news outlet that also actually ran a story, agitators appeared to have left the scene by about 2:30 a.m. That story said the protesters appeared to have used a pile of wooden pallets to construct a makeshift bonfire in front of the burning building. According to Grace Morgan’s tweets, they crowded around in front of this fire chanting, “This is what community looks like.” Pictures and video of the whole blasted night are at the link.

As we reported, the police, once they finally arrived, fired pepper balls at the protesters to get them to disperse. “It’s unclear whether any arrests were made,” the Daily Mail story said. But as far as we know, what we reported early Monday morning still stands — it seems clear that no arrests were made.

The Same — But Different

Okay, we’ve got ICE agents barricaded inside a building and that building set on fire. While there needs to be an investigation, this looks on its face to be attempted murder, as I said yesterday. Today, we came across a commentary from last August, again from Tyler O’Neil, pointing out that Portland Mayor Ted Wheeler said the same thing about a similar arson incident.

Oh, wait, I see. Wheeler was apparently referring to the look of the video coming out of Portland, concerned that it might function as “B-roll film” for the campaign to re-elect President Trump. No wonder he got involved. He told his audience, “Don’t think for a moment, if you are participating in this activity, that you are not being a prop for the re-election campaign of Donald Trump, because you absolutely are.”

I guess that now, with the election being over, that doesn’t matter, so Wheeler doesn’t have to bother with trying to stop the violence in his city.

At the time, Wheeler was speaking about a previous incident in which doors were barricaded and a building lit afire. “The attack was immediate, it was intentional, and it was planned,” he said then. “It was intended to cause serious injury or death, and it very well could have.” He called that incident “attempting to commit murder.”

In that case, it was a city building. “I believe that city staff could have died last night,” the mayor said. “This is not peaceful protest. This is not advocacy to advance reforms or transform any system.”

When Mayor Wheeler said this, the so-called “peaceful protests” had gone on for 70 days. Here’s what Portland had looked like just a few weeks earlier, in July, when Wheeler, echoing then-candidate Biden, directly blamed President Trump for the “flat-out urban warfare” going on and chastised police for their “unprovoked” (!) use of tear gas on protesters, when the cops were actually just doing their job by responding to arson.

Here We Are Again

We can thank the mayor for finally saying something in August, even if his motivation was to avoid helping Trump win the election that was just a few months away. But here we are again, the following April, and Portland has had another incident of what almost certainly was attempted murder. (Make that attempted mass murder, if more than one or two agents were inside the building.) Has Wheeler even said anything about it? If he had condemned it, there likely would’ve been more than the sparse amount of news coverage it got.

But I guess that since Trump isn’t currently running for re-election and this latest “B-roll” won’t have any effect on who is President, Portland’s mayor isn’t even bothering to weigh in. Besides, with all the other violence in the news that can be spun to fit the leftist narrative, the real domestic terrorists — not conservative Trump supporters but violent Antifa and BLM thugs — can continue trapping people inside buildings and trying to burn them alive, and the news won’t even cover it.