The Difference Between the Humanitarian and the Faithful Servant of Christ

To heal a wound, you must touch the wound, and no program or policy can do that. Only a person can love. 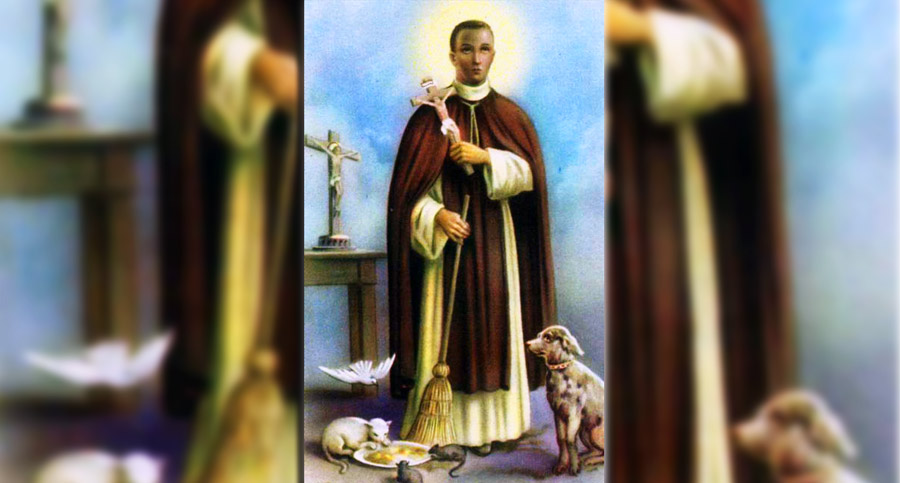 “Brother Martin,” writes the biographer of St. Martin de Porres, a Peruvian mulatto who lived during the seventeenth century, shortly after the conquistadores had done their ruthless and efficient work, “was no philanthropist, no humanitarian.”

No one but a Christian would understand that sentence. For the biographer, J. C. Kearns, O.P., has just spent many pages describing Martin’s vigor in assisting the sick and the poor of Lima. Early in life, he had learned all he could about medicine, so that he could tend to the sick, applying balm and poultices to their sores with his own hands. He became the infirmarian at his Dominican priory. His days, says Kearns, “were literally crowded with action — even the nights were devoted to vigils by the bedsides of the sick.” Martin learned to subsist on as little sleep as possible, so that he could be up and doing corporal or spiritual works of mercy, including many hours of intense prayer for the healing of souls.

And he was more than a physician making the rounds of the city. Avarice and lust take their toll upon a people, and children bear the worst of it. Lima was overrun with orphans, prey to hunger and disease, and to the vile degradation of the prostitute. Martin, whose Spanish father had rejected him when he was a small child, was touched by their plight. “The civil authorities,” Kearns notes, “had given up the problem as hopeless.”

For the Authorities, Hopeless

That is but an honest evaluation of the case. For the civil authorities alone, with the tools they possess, problems like that one are in fact hopeless. In seventeenth-century Lima, as in twenty-first-century Detroit, poverty is hopeless, the rehabilitation of criminals is hopeless, the wholesome education of street children is hopeless — all these and many more diseases of the human spirit, for the authorities, are hopeless. To heal a wound, you must touch the wound; to heal a heart, you must touch the heart. And that is what no program or law or bundle of entitlements can do.

So Martin pleaded the case of these children. He went to the people. He told them of a dream that heaven had sent him, of a school and an orphanage to take care of the boys and girls both physically and spiritually. So eloquent was his plea that the viceroy and the archbishop sanctioned his plans. Wealthy persons opened their purses. A Don Mateo Pastor and his wife gave the astonishingly large sum of two hundred thousand pesos — what would have constituted a rich dowry for fifty young brides. And thus was founded the Orphanage and School of the Holy Cross.

This wasn’t a matter of abstract reasoning. The rich people didn’t apply political philosophy to the situation. They didn’t deduce the size of their gifts by utilitarian calculus. They gave to the children by giving to Martin, whose indefatigable charity made him to be trusted implicitly. That is, their gift was at one remove, but still deeply personal.

There’s more. Martin de Porres helped people in large and visible ways. He also helped them in the small ways that are beneath the notice and the dignity of the humanitarian. He went about with his bag of medicaments, but also with a broom, sweeping the cloisters and seeking out “the most neglected places that he might rid them of litter and set things in order.”

When someone reproached him for it, saying that it was work befitting a servant, Martin replied that he “was the most despicable of all the slaves.” In that he was in accord with the wisdom of Thomas Aquinas, who said that so long as we remember that all of our virtue comes as a gift from God, we may without falsehood believe ourselves “in all ways unprofitable and useless” with regard to our own capabilities.

No, Brother Martin was no philanthropist, no humanitarian, but rather “a faithful servant of Jesus Christ; his one aim in life was to bring mankind closer to Him.” Kearns remarks that “the philanthropist and the humanitarian are as different from the saints of God as nature is from grace, as the natural is from the supernatural.” Grace does not supplant nature but perfects it, says Thomas Aquinas. We may invert the dictum and say that, if it is quite untouched by grace, nature, that is, our fallen nature, is worthless.

Kearns refers us to St. Paul’s hymn to charity; the man who moves mountains is nothing without it. “Martin,” he says, “keenly appreciated how, unless motivated by the spirit of charity, so beautifully described by the Apostle of the Gentiles, all the efforts of economists and social workers, however praiseworthy, are but sounding brass, or a tinkling cymbal.”

Here we may note a further degeneration, from the philanthropist to a state-administered wardenship, turning the poor into clients, affirming them in vice and encouraging in them the view that they deserve what the state has wrested from the sweat of other men’s brows. The philanthropist at least gives his own money, and duly shows up to cut the ribbon when the school is opened, and makes sure he gets a nice plaque on the wall with his name on it. It’s tainted with self-regard, but at least there’s an element of the personal in it. Generations of students will look upon the plaque, if not in gratitude, at least in curiosity.

I have often heard it said that a government must take up most of the burden of charity, simply because the government has money and Christians don’t. But that’s flat wrong. The government as such has no money at all other than what it appropriates from the people.

St. Martin de Porres was graced with wondrous gifts; many miracles were attributed to his prayers, though Martin himself tried his hardest to keep them concealed, lest pride creep into his soul. He fasted regularly, and somehow what little food he ate was able to sustain a large man of extraordinary physical strength. He mortified his flesh nightly. None of this is comprehensible to the humanitarian, who doubtless would have intervened to place Martin in a cell somewhere, for his own good.

Yet Martin’s charity is something too obvious for the humanitarian to see. He sees that a fellow named Martin is going about with his medicines. But he sees no more. Or perhaps it is too frightening to see. For nowhere outside of the Christian faith does one find a Martin de Porres or a Mother Teresa. “I wouldn’t do that for a million dollars,” said a reporter as he watched Mother Teresa cleaning the fetid sores of a leper. “I wouldn’t, either,” said Mother Teresa.

This is the challenge to us Christians. It’s as old as the faith. The unreformed Scrooge pays, through taxes, for poorhouses and prisons. Sounding brass, clashing gongs. Is the task enormous? How can we extend charity to so many millions who need it? Nay, but the task is greater than that. We are to extend charity to one person who needs it — to love that person, right there, in and through our love of God, as if that person were worth more than all the physical cosmos, as if God himself would have become flesh to suffer and die for that one person alone — as indeed he did.

Anthony Esolen is Professor of English at Providence College. The translator of Dante’s Divine Comedy, he is the author of Reclaiming Catholic Social Teaching and many other books. He is a senior editor of Touchstone. “Blessed Assistance” appeared in the May/June 2013 issue of Touchstone: A Journal of Mere Christianity.