750 police officers were injured defending Americans from violent rioters. Now the defended are demanding the police are defunded. 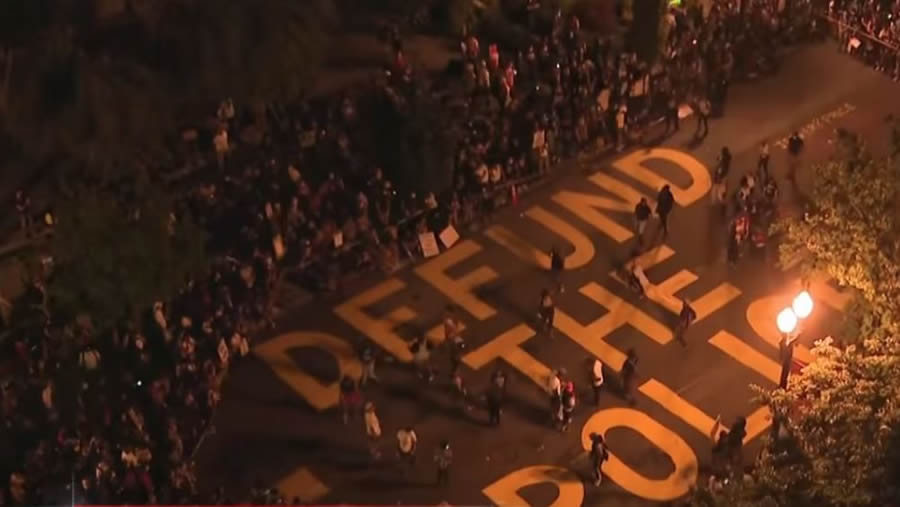 [U]nderstanding this, that the law is not laid down for the just but for the lawless and disobedient, for the ungodly and sinners, for the unholy and profane, for those who strike their fathers and mothers, for murderers. (1 Timothy 1:9, ESV)

Make no mistake, anyone with the slightest hint of discernment can agree a vile spirit of lawlessness is overtaking this nation.

This buildup has been at work for years. It’s clear we are blazing quickly toward the end zone of the end-times.

Don’t be fooled by what they say. For that day will not come until there is a great rebellion against God and the man of lawlessness is revealed — the one who brings destruction. (2 Thessalonians 2:3, NLT2)

Lawless people are ravaging our cities, businesses and lives — most often, black lives. The core of my emotions as a human have been rocked by what I’ve witnessed. A lawless act of murder by a police officer has resulted not in love or forgiveness, but predictably in revenge. Lawlessness.

Don’t misconstrue my words or my motive. Racism is pure evil. We should all be deeply hurt by what has ravaged our black brothers and sisters. If we don’t, we have no soul.

My motive is to shine the light on the invisible realm, on the spiritual reality of our natural situation. Truth must prevail in the midst of a volatile emotional situation.

Everyone who makes a practice of sinning also practices lawlessness; sin is lawlessness. (1 John 3:4, ESV)

It doesn’t take a theologian to appreciate the connection between the call to disband and defund the police and the spirit of lawlessness. The extremely high majority of police officers in America are amazing individuals, driven by passion for people and operating in extreme integrity. Demonizing the world’s greatest peace force is shameful.

Our nation’s police, though imperfect as any and every human institution is, represents law and order. A push to disband and defund exposes the motives and spirit of those seeking to uproot and tear down. Lawlessness.

Racism is evil. Most everyone agrees.

Police brutality/murder is evil. Most everyone agrees.

We should all be horrified by the murder of George Floyd. Most everyone agrees.

We don’t have to be convinced.

Now, don’t get mad at me, I’d like to ask you something, something that is on the minds of people all across the nation. Here’s the question: What evidence is there that George Floyd’s horrific murder was racially motivated?

To expand on that critical question, are people just presuming it was because the cop had run-ins with minorities in the past? Or simply because a white cop killed a black man? Is it because other cops have targeted blacks in the past? How does that relate to this specific cop? Further, does that mean all cops, or most cops are racist? Are they the enemy?

This is a very important question as the supposition that it was racially motivated has resulted in serious reactions like riots, violence, attacks, murders, destruction of businesses and assaulted lives (including black lives).

This is a very important question as it attempts to confirm that there’s racism in our nation (which there is) and systemic racism in the police department and other American institutions (which is debatable at best).

This is a very important question as it draws a line in the sand and forces people to reject deeply held personal beliefs and values that are contrary to the narrative. Beliefs like Drew Brees holds (held?), a refusal to kneel during the National Anthem. The assault against his patriotism was disturbing.

This is a very important question because even if it was racially motivated, the violence and the general spirit of many (not most) of the reactions have not only been inappropriate but destructive to our nation.

And, most recently, this has become a very important question as the belief that racism motivated the killing is resulting in defunding and disbanding police departments, launching cities into a state of dangerous lawlessness.

Friends, it’s possible to hate racism and to love blacks, whites and everybody else in our nation without buying into narratives that are contrary to our personal values. We can love while agreeing or disagreeing. Depending on what the proposed beliefs and solutions others may adhere to are, we can voice concern while still honoring each other. We can agree to disagree while still authentically loving and valuing each other. We can still hurt when they hurt, even if our analysis of and solutions to the matter differ.

The coming of the lawless one is by the activity of Satan. … Therefore God sends them a strong delusion, so that they may believe what is false, in order that all may be condemned who did not believe the truth but had pleasure in unrighteousness. (2 Thessalonians 2:9, 11-12, ESV)

It’s imperative that we take pause for a moment in the natural and lock in to the rapidly evolving spiritual climate. The spirit of lawlessness is not to be taken lightly.

Satan is possibly more active on the earth today than he has ever been as his end is drawing nearer every day. The lawless one is gathering an evil army, anointing all who are interested to assist him in fulfilling his diabolical purposes.

Don’t be surprised as the demonization continues to spike and ramp up. Confusion and delusion are overtaking many. This is a terrifying reality as it sets into motion people’s eternities. Lawlessness produces a confused, enraged, demonized and delusional people who will do all they can to destroy.

Defunding and disbanding of the police is merely a natural result of an invisible reality. So are the riots, violence and hatred. So is police brutality. So is every sort of wickedness that is suffocating America. It takes a confused and delusional people to do such a thing. It’s contrary to common sense.

The Answer: The Gospel

Natural solutions can be helpful, but they will never bring resolution. The only thing that can, quite simply, is wholehearted surrender to Jesus Christ. That’s it. Nothing else will work.

When a nation repents, and when sinners surrender to Jesus, healing can begin.

[J]ust as David also speaks of the blessing of the one to whom God counts righteousness apart from works: “Blessed are those whose lawless deeds are forgiven, and whose sins are covered;blessed is the man against whom the Lord will not count his sin.” (Romans 4:6-8, ESV)

It’s time for preachers to preach this truth boldly. It’s this message and only this message that can stand against the lawlessness.

Pastors’ refusal to regularly engage the topics of culture and politics from behind the pulpit has, in large part, resulted in the chaos in our nation today.

No, you can’t “just preach the Gospel.” Applying the truth of the Word to today’s national situation is mandatory. Non-negotiable. If you aren’t equipping the saints to be a spiritual force in our nation, exactly what are you training them to be? Ushers? Greeters? Your personal armor bearers?

No. They are today’s mighty warriors who will assault the kingdom of darkness and expose wickedness. They are a lawful people who will stand opposed to lawlessness. It’s time for the people of God to preach, equip and confront with a mighty anointing of God. If we don’t, our nation is lost. Cities devoid of police protection would be but the beginning of sorrows.