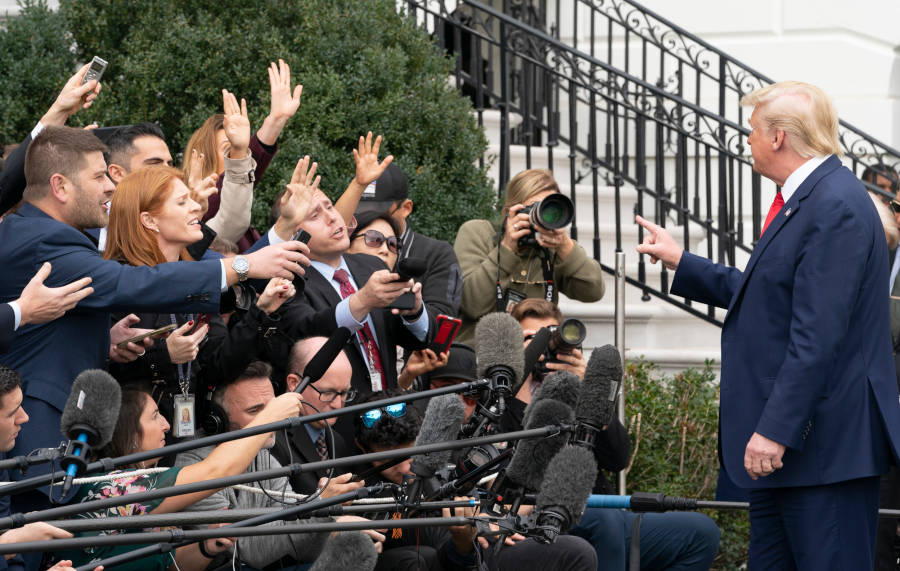 President Donald Trump talks to members of the press on the South Lawn of the White House Friday, Oct. 25, 2019, prior to boarding Marine One to begin his trip to South Carolina.

The self-pity of liberal journalists is proof that President Trump is winning his fight against Fake News by exposing the rampant media bias against his administration.

Just recently, New York Times editor Dean Baquet told The Guardian that President Trump is endangering journalists’ safety by criticizing their work. “I think personal attacks on journalists, when he calls them names, I think he puts their lives at risk,” Baquet said.

Mind you, this is the same Dean Baquet who made targeting President Trump the core mission of the Grey Lady’s coverage. For those who may not recall, Baquet assembled Times staff in a closed door meeting in August to announce a new anti-Trump direction for the “paper of record.” Concerned that the Mueller Report had landed with a dud, Baquet insisted that his staff pivot to covering President Trump’s “racism.”

“We built our newsroom to cover one story, and we did it truly well,” Baquet explained. “Now we have to regroup, and shift resources and emphasis to take on a different story.”

Under Baquet’s leadership, The New York Times has gone from a respected publication to a smear merchant. The leaked transcript from the August staff meeting revealed that the rot penetrates every nook and cranny of the paper’s operations.

After insisting for years that the President was a Russian agent, the Times determined that calling President Trump a racist would be a more effective approach than promulgating baseless conspiracy theories about him. That’s why they launched the “1619 Project,” a harebrained attempt to rewrite American history in a way that contradicts the patriotic narrative favored by the President and his supporters.

Despite his own more-or-less open declarations of partisanship, Baquet still thinks liberal journalists can elicit sympathy from the American public by painting themselves as victims. He couldn’t be more wrong.

The American people see the mainstream media’s coverage of this President for what it is: a partisan smear campaign. Coverage has been so manifestly one-sided that many journalists essentially operate as the communications arm for the left. President Trump was spot-on when he told the White House press pool, “I consider you a part of the Democrat Party.”

President Trump is not putting journalists’ lives at risk by calling a spade a spade. When he fights back against the fake news, he is doing a great service to the American people, most of whom fear that media bias is only going to get worse as the 2020 elections grow closer.

Naming and shaming so-called journalists who manipulate facts and distort reality to fit their own political narrative is the only way to expose their malfeasance so that the public can demand greater accountability from the media.

When Baquet and other journalists cry that it puts them at risk of physical harm, they’re really revealing their own fear of the public backlash that their shoddy journalism deserves.

If they want to recover the esteem they once held, journalists should start doing their jobs and covering the news objectively — and stop playing the victim card every time President Trump calls out their manifest bias.

Ken Blackwell served as the mayor of Cincinnati, Ohio, the Ohio State Treasurer, and Ohio Secretary of State. He currently is an advisor to the Family Research Council and serves on the board of directors for Club for Growth and National Taxpayers Union.