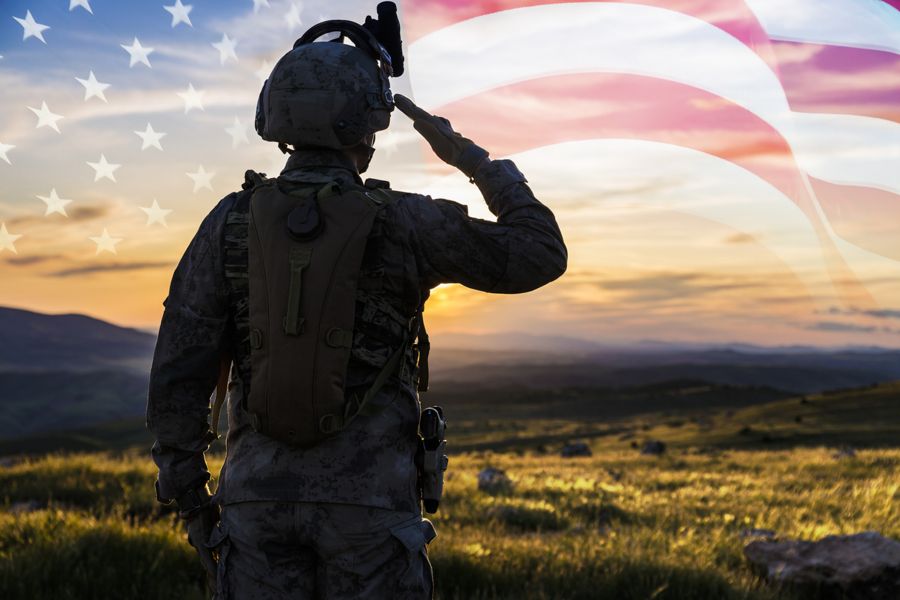 This hits close to home. Too close. On that same day my 97-year-old father, one of the few still-surviving World War II veterans, passed away.

Dad volunteered for the Army Air Corps in 1942, got trained and shipped off, and didn’t come home until the war was over. He was proud of his service for his country, and I too was (and am!) extremely proud of him for it.

Also last week, my son-in-law Morgan, an Army captain, returned home from an incredibly difficult 9-month deployment. His time away wasn’t just hard on him. Lisa, his wife and my daughter, gave birth to their first child halfway through his deployment. Their son was my father’s fifth great-grandson. I’m very proud of Morgan and Lisa, too.

My dad didn’t enlist to fight a war against “whiteness.” Morgan didn’t join the Army, and he didn’t spend all those months away from home, to fight for Marxism.

(Note to Lisa, who I know will read this: No need to wake the baby as you react to that. I wrote it intentionally as an understatement. A very serious understatement.)

As I said, this hits close to home. If Lohmeier is right, the military — that’s right our own U.S. military! — is close to dishonoring the memory of my father, not to mention the service of millions more.

Lohmeier’s concerns revolve around military doctrine and training, which he says is being “increasingly grounded in the misunderstandings” of The New York Times’ “1619 Project” and similar teachings.

“The 1619 Project” is political and historical hackery hatched for anti-American purposes. Its chief conceit is that America was birthed in 1619 with the arrival of the Jamestown settlers and their slaves, and that slavery was always America’s reason for being. Somehow it misses the fact that 1776 was different from 1619.

Lohmeier writes in his self-published Irresistible Revolution: Marxism’s Goal of Conquest & the Unmaking of the American Military, that the project’s chief author, Hannah Jones, gets her history so wrong, even “Trotskyite Socialists” have expressed alarmed. She came “dangerously close,” they said” to “endorsing … genocide” as “a solution to inherent racism.”

Jones’s views on America seem to have changed little since a letter she wrote to the editor of Notre Dame’s Observer several years ago, saying “whites have always been an unjust, jealous, unmerciful, avaricious, and bloodthirsty set of beings.” Christopher Columbus was “no different then [sic] Hitler,” she said. Sure. Columbus set out intentionally to conquer a continent, to kill millions, and to establish his own “Reich.” Pretty bold for a man with three small ships, who thought he was sailing to find an easier trade route to the Far East.

No one who believes something so outlandish, so extreme, or so obviously false as that has a thing to say to my dad, who served long years in North Africa, or to my son-in-law, who won’t say where he was deployed, except it was “hot and sandy.” Both of them signed up to serve with a great military defending a great country.

It’s not just “The 1619 Project.” Lohmeier has also spoken out against Critical Race Theory being taught in the military. Military identity, he says, is becoming less about oath and uniform, and more about race.

It’s one thing to teach unity among members of different races — and in fact the military has been perhaps America’s most successfully integrated institution. But CRT’s roots are unquestionably Marxist, and its effect is shame, blame, and the divisiveness of “intersectionality.”

Will the Military Pay Attention?

Lohmeier’s firing brings to mind that of Captain Brett Crozier, former commander of the USS Theodore Roosevelt (“the TR”). He’d emailed his superiors, urgently requesting help finding housing for sailors coming ashore from the aircraft carrier due to a COVID outbreak. His unencrypted email reached the San Francisco Chronicle, they published it, and he lost his command.

The Navy hinted later on that there were additional reasons to relieve him of command. They believed him, though, and dealt with the problem he’d identified. They gave the TR a thorough cleansing and returned it to sea.

It’s also possible the Space Force had other reasons to do the same with Lohmeier, though nothing of the sort seems to have surfaced so far. The question now is whether they’ll believe CRT is a problem. Or “The 1619 Project.” Or to ask it another way: Will the military recognize Marxism as a problem in its own training and doctrine?

For the sake of my dad’s memory, I hope so. For the sake of many others still living and serving, and for their families, I hope so. America is better than this. Can we become better yet? Certainly. Not this way, though. Not by turning our military into a training ground for anti-American Marxist creeds.