Clearly, the Capitol Hill Riot Was Not ‘Sedition’ 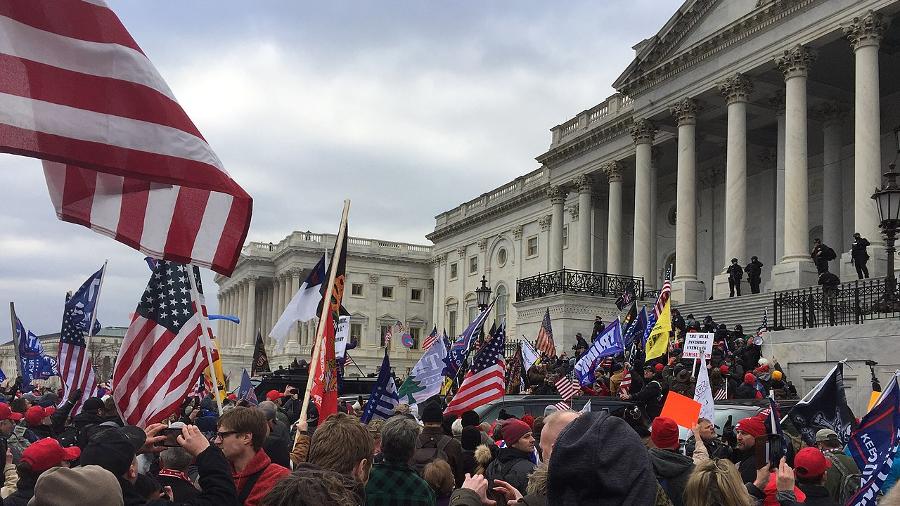 We’ve certainly seen no evidence that Trump supporters — at least the real Trump supporters, even those who entered the Capitol Building — intended to forcefully interfere with a lawful exercise of government authority. Some have said they were trying to make a statement that they hoped the certification would be “paused” while certain irregularities were examined. They certainly were not trying to overthrow the government or anything close.

What is “Seditious Conspiracy?”

McCarthy, being the seasoned legal expert that we are not, was able to explain very precisely why “seditious conspiracy” is the wrong charge. It requires two conditions be met, he said: 1) that there is an agreement to use force (not just “rambunctious” protest), and 2) that there is an attempt to wage war against the United States or oppose the lawful authority of the United States.

The last time a charge of sedition was made, it was against actual Islamic terrorists with bombs.

And even if the actions that took place might be (wrongly) interpreted that way by some, it’s another thing to prove criminal intent. “Seditious conspiracy is the rare criminal offense in which motive matters,” McCarthy said. January 6, he explained, “involves people who committed serious crimes but believed — however foolishly — that they were saving the country, not waging war against it. Far from opposing the lawful authority of the government, they believed — not irrationally — that they were acting at the behest of the President of the United States.”

Here’s where I deviate significantly from McCarthy’s view of the protesters’ state of mind and Trump’s role in what happened. It was irrational for them to believe that President Trump wanted them to riot, break windows, and vandalize the Capitol. Never did he “behoove” them to do such a thing.

A Bit of History About Sedition

Anyway, last summer, after the feds had set up what they called their “Sedition Task Force” (!) to address the events of January 6, 2021, McCarthy wrote that “the rioters will be punished appropriately, but not punished as if they were terrorists who were trying to overthrow the United States government.” Au contraire. That is exactly what the Biden administration is trying to do now. In fact, the last time a charge of sedition was made, it was against actual Islamic terrorists with bombs.

As it happens, McCarthy himself prosecuted that case, in 1995, against the Blind Sheikh’s jihadist cell after their bombing attempt on the World Trade Center and a later plot to bomb other New York City landmarks. Our current administration is trying to put the very same label of “seditious conspirator” on Trump supporters upset at what looked to them like blatant election fraud. They were expressing opposition to something they clearly believed was unlawful.

A bit of history: The law against sedition was first codified during the Civil War, to target Confederate sympathizers in the North who were helping the South — a very different situation, with people literally at war with each other. “Our sedition law is designed to address conspiracies formed by anti-American enemies to attack our country and its government in an unambiguously hostile and violent manner,” McCarthy explained. “The terrorists I prosecuted, in the course of plotting and conducting mass-murder attacks, were willfully at war with the United States and said so unabashedly. That is not true of the January 6 rioters.”

Let’s Be Real About January 6

“Let’s be real,” McCarthy wrote in June. “With due respect to Attorney General Merrick Garland, the Capitol melee is by no stretch of the imagination the greatest threat to our democracy in living memory. It is not 9/11. It is not the Boston Marathon bombing. Indeed, the June 14, 2017, Washington baseball field shooting spree, in which a radical leftist tried to mass-murder much of the Republican congressional delegation, bore more hallmarks of a terrorist attack — albeit one that, like the deadly Black Lives Matter riots of last summer, the media-Democrat complex always remembers to forget.”

McCarthy did note “forcible entry, vandalism, and some theft of government property” on the part of some Capitol Hill rioters. He called it “a national disgrace.” At that time, some charges had already been filed and some participants had pleaded guilty, but none of this involved sedition. Oath Keepers founder Jon Ryan Schaffer had pleaded guilty to two charges: 1) obstructing a congressional proceeding, and 2) trespassing on restricted federal grounds while armed with a dangerous weapon (bear spray, which there is no claim that he actually used).

Last summer, McCarthy blamed President Trump for the riot, and he still does, as he sees Trump as responsible for making his supporters believe Biden hadn’t really won the election. I disagree, believing people are responsible for their own foolishness. If we’re going to attribute their anger to some outside force, how about the courts, for refusing to look at the evidence?

Whether or not Trump had said the election was stolen, we saw enough jaw-dropping irregularities — just on election night — to generate enormous doubts. In fact, those doubts have grown with time, in part because of the stunning lack of transparency regarding the process, with over half of Americans now suspecting there was enough interference to change the outcome. Taking that “pause” would have been a good thing, instead of pushing ahead to formalize a “win” that millions of people saw as a likely fraud.

Finally, if you haven’t yet seen the documentary film Capitol Punishment, about the events and aftermath of January 6, I highly recommend you watch that. Nick Searcy, who was there that day and stars in the film, was a guest on my TBN show this weekend, and we had a great discussion. The film has lots of amazing “you-are-there” video from that day and interviews held later with participants who describe the shocking FBI raids they and their families endured, in which they really were treated like terrorists. There’s an enlightening segment on Ashli Babbitt, including video of her smiling and happy on her way to the Capitol just a short time before she was killed, and an interview with her husband that is not to be missed.