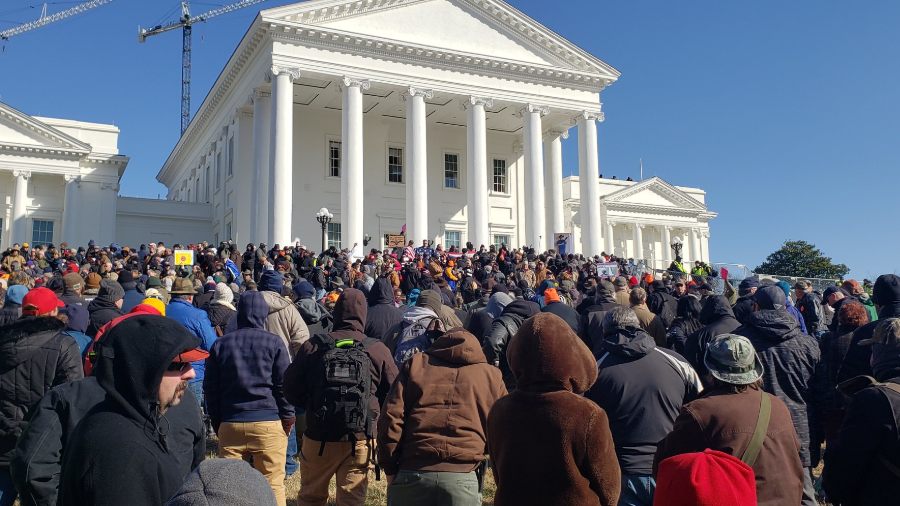 We dodged a bullet. The demonstration by 22,000 Second Amendment advocates in Richmond, Virginia, didn’t end in violence. Or racist incidents. Or even litter. (The demonstrators cleaned up after themselves, leaving the area spotless.)

Tens of thousands of patriotic Virginians of every race went to their state capitol building on the day traditional for public demonstrations. Alarmed at new proposed gun-grabbing laws, they marched peacefully and amicably. They spoke up in defense of our constitutional gun rights. They recited the Pledge of Allegiance. Really scary stuff.

Leftists in government and media were bitterly disappointed. Virginia Governor Ralph Northam had declared a State of Emergency. Media warned consistently in days leading up to the march that “white supremacists” were going to use violence. They warned and warned, demonized their fellow citizens, and descended on the capitol to report on … a nothingburger. A demonstration as peaceful as the annual March for Life.

It could have been different. Think back just a couple of years.

President Trump’s first summer in office was marred by a catastrophe. He bore no blame for it, but media scapegoated him and his supporters. NeverTrump elites sneered, “I told you so.” Leftists who see “racism” embedded in every social institution they don’t control took the event as proof of their Cultural Marxist theories.

If you weren’t paying close attention to alternative media during the Charlottesville riot of 2017 you might not know what really happened. Thousands of Virginians who wanted to defend their state’s heritage organized a protest. They opposed the vandalizing or removal of Confederate monuments. Whitewashing the past and demonizing our ancestors serves no purpose, they observed. Except perhaps to distract us from our own current evils (such as abortion and euthanasia) by focusing on all those sins we’re not committing, like trading slaves.

Hijacked by a Cabal of Extremists

A small cabal of white supremacists who hate America and want to smash it into tiny racial microstates attached itself parasitically to these Virginians’ 2017 event. They showed up with Nazi flags and symbols — an outrage to the thousands of Virginians who died fighting fascism in World War II. These uninvited extremists itched for a fight. Some openly want a race war in America. By trumpeting their involvement, they attracted thousands more violent counter-demonstrators, in the form of “Antifa” marchers. A fight was likely, and Charlottesville’s mayor told police to stand down, to let it happen.

And so it did. Neo-Nazis clashed with neo-Marxists and violent anarchists. One Antifa members improvised a flamethrower, which he used to try to roast his opponents alive. And one member of the neo-Nazi group plowed his car into a crowd, killing a counter-demonstrator.

Blaming Trump and His Voters

Media reaction proved predictable. All of the pro-heritage marchers got tarred with the Nazi brush. The narrative of the violent, anti-free speech Antifa seemed vindicated. Their tactics really were necessary to stop a vast and dangerous neo-Nazi movement. When President Trump rightly condemned the Nazis, and distinguished them from the heritage marchers, the MSM went wild. They butchered his words, to make it seem as if he’d been praising the racist agitators. This was precisely the kind of “dog-whistle” to “extremists” they’d been accusing Trump of blowing since he won the nomination.

As Jason Jones and I pointed out here at The Stream while the moral panic was at its height, the official media narrative was a lie. But it had its effect. The planned chaos and engineered violence of Charlottesville helped speed the destruction of still more Southern monuments. It likely played a role in the 2019 landslide Democratic wins across the state — which gave us the proposed draconian gun laws. Steve Bannon’s correct insistence that Trump not throw innocent conservatives under the bus may have sped his White House exit. Which unarguably weakened Trump’s presidency.

The Democrats Need Another Charlottesville Riot

With the election coming up, conservatives and Christians could not afford a repetition of the 2017 disaster. With a strong economy, a strong America avoiding new stupid wars, and the Democrats descending into open-borders socialism and radicalism, Trump’s chances are excellent.

The only real hope Democrats have of clinching the vote in November? Distracting Americans from their own, authentic descent into un-American extremism. A few dozen unwanted Neo-Nazis hogging the camera, getting the loathsome Richard Spencer back on CNN? It might well have done that. You should know that the racist movement has adopted the slogan of Italian Communists. Namely, “The worse things get, the better it is.” Democrats winning elections helps their cause, they believe. How? Because it radicalizes white people and makes their longed-for race war more likely.

We Kept the Peace

How did things turn out differently this time? I think that Virginia conservatives and libertarians took the 2017 riots to heart. They identified a small number of white supremacists who wanted to commandeer this event, and disowned them in advance. Police saw evidence that they threatened violence and arrested them. And conservatives kept their rhetoric peaceful and patriotic, grounded in the Constitution. They made sure to highlight black Second Amendment advocates, like this great American:

Hands down the WORST white supremacist rally I’ve ever seen! I mean they let me speak and everything. People shaking my hands and stuff. What would MLK do if he saw all of these people judging me by the content of my character instead of the color of my skin? #MLKDay pic.twitter.com/ah0hDWGcCY

Turning the Other Cheek

In other words, conservatives in Virginia wouldn’t be baited. Like Nick Sandmann facing extremists at the March for Life, they turned the other cheek. So Christ commands. They continued to fight for their rights. So justice demands. These Americans employed the First Amendment in defense of the Second. They didn’t escalate to violence, or even provocative speech. PJ Media reports on how the demonstrators scorned one attendee who urged escalation to violence. They assumed immediately that he was a left-wing provocateur.

With the election coming up, conservatives and Christians could not afford a repetition of the 2017 Charlottesville disaster.

In other words, they followed the same rationale that leads pro-lifers to renounce using violence even against abortion. As I explained here in 2015, Christian Just War principles also apply to political violence or revolution. That is, it must always be:

We shouldn’t lightly talk of civil war, or threaten armed resistance, or other violent tactics, barring those conditions. Which of course don’t apply in America, at least at the moment. The collapse of public order always proves tragic, especially to the weakest among us. Bravo to Virginia citizens who steadfastly and stoically ignored the slurs of national media and their own state government. You made America proud.