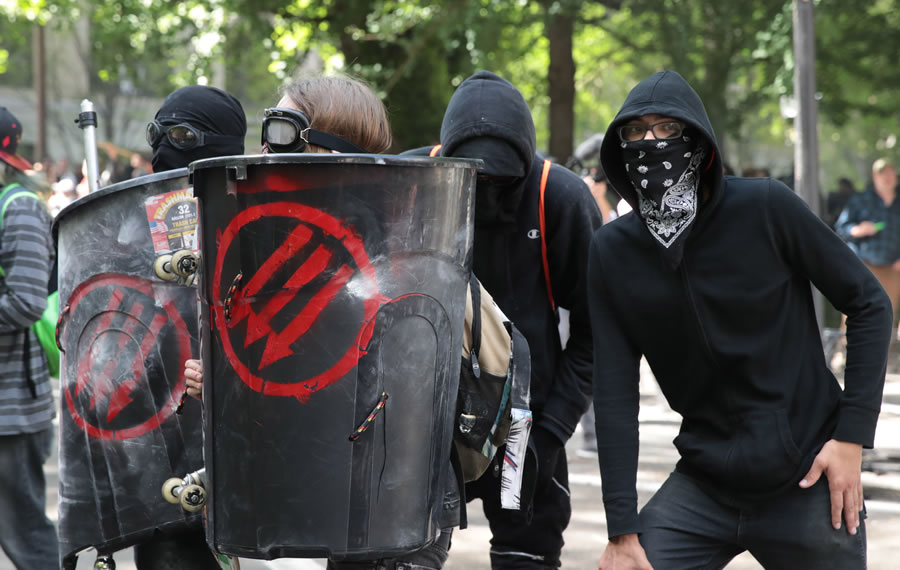 Police clash with demonstrators as they try to clear 'Antifa' members and anti-Trump protesters from the area during a protest on June 4, 2017, in Portland, Ore. Police used tear gas, flash bangs and rubber bullets to clear the crowd. A protest dubbed "Trump Free Speech" by organizers was met by a large contingent of counter-demonstrators who viewed the protest as a promotion of racism.

The riot in Charlottesville, Virginia is a stain on America. It’s the fruit of growing political hate at both ends of the spectrum. It’s also a failure of law and order. The authorities’ first job is to keep the peace, while protecting the free speech rights even of the nastiest among us.

The pro-choice racists who marched in Charlottesville tempt people to silence them using their fists. We’ve felt that way often watching other flavors of pro-abortion pagans exercising their First Amendment rights. But using violence is wrong. It’s wrong against Republican congressmen and Antifa marchers, against neo-fascists and New Black Panthers, all alike. That’s the road to civil war. (Read this piece by liberal writer Peter Beinart on the reach, power, and virulence of the violent Antifa movement.)

We have a government in the first place to prevent strong disagreements from turning into violence. To keep people from getting killed in the streets. Not to routinely wave off the anti-speech violence of one rabid political faction (Antifa), then be shocked, shocked, when haters on the other side (the Alt-Right) decide to escalate. That’s what happens when the authorities giving orders to the police pick and choose which side gets to break the law.

That’s how Germany in the 1920s and 30s descended into chaos, then welcomed tyranny. We stumble down that same road when police and other authorities allow either side to use violence to intimidate or silence people.

But that’s not a message for today.

A Day to Come Together as a Nation and Virtue Signal

Today, for too many Christians and conservatives, is primarily a day for virtue-signalling. For the church to boldly step forward and denounce … exactly what the world denounces. Sometimes you do have to state the obvious. White racism is wrong. That is absolutely true. Saying that in the 1850s or even the 1950s in America was prophetic. It’s still true, of course.

But today it takes the same courage as crying: “We have no king but Caesar!” That was legally true in AD 33. And it kept the peace. Just imagine the vigor and voice which the scribes and Pharisees gave when they shouted that. It felt so … good!

What the world holds dear and protects … we leave that carefully alone.

Cheap Grace by the Caseload

Well, we can’t address every evil, can we? So why don’t we focus on the really unfashionable, marginalized, contemptibly weak evils, which the world also condemns? That sounds really easy and comfortable. (There’s a blue light special in aisle 9: cheap grace, by the caseload!)

The democratic German establishment let Nazis come to dominate key departments in universities via conspiracy, fear, and silencing. Programs emerged to study Jewishness as if it were some sort of illness — you know, the way they’re studying “whiteness” and “maleness” today.

Do you want to know how and why the Nazis came to power? Because the establishment let them. It considered them idealists — rough around the edges, but with their hearts in the right place. They were vigorous, even dangerous. But at least they were fighting the greater evil, the real threat — the Communists. So the authorities in Germany treated the Nazis as our authorities treat Antifa today.

Remember that by the 20s and 30s, the USSR had already committed historic mass murder and was running concentration camps holding millions. (The Nazis hadn’t yet gotten the chance.) Surely the Commies were the greater evil.

So the democratic German establishment let Nazis come to dominate key departments in universities via conspiracy, fear, and silencing. Programs emerged to study Jewishness as if it were some sort of illness — you know, the way they’re studying “whiteness” and “maleness” today. (An almost equally virulent anti-Semitism is also empowered today on campuses, in the name of “anti-Zionism.”)

Does the comparison sound crazy? Remember that by the 1920s Jews in Germany were the wealthiest, best assimilated Jewish population in history. They were leaders in arts and sciences, the media and the academy. Because of their power and prominence, the bitter and envious felt entitled to attack them. To warn of their dangerous “dominance.” To blame them for Communism.

“We have no king but Caesar!”

You know, the way it’s now okay to vilify whites and males, and treat West Virginia coal miners as if they bore the blame for slavery. If anyone had suggested in 1925 that the accomplished Jewish population of Germany would be openly persecuted in 10 years, they would have been scoffed at as alarmists. Meanwhile, one university chair after another went to eugenicists or rabid nationalists. …

A Nudge and a Wink to “Our” Thugs

When leftist thugs fought in the streets, the police waded in and cracked down on them hard. Whenever proto-Nazis and Nazis did the same … they got a pass. When Nazis terrorized moderates or religious conservatives, they got slaps on the wrist. You know, the way the authorities let Antifa off today, after they take over campuses and terrorize faculty and silence speakers while wearing hoods and wielding weapons … with a stern warning and a covert pat on the back.

Okay, they’re technically breaking the law, but it’s in a good cause. They’re just trying to stop those wicked villains, who threaten our values. Let them smash a few heads, and burn a few books, wink-wink.

When Hitler actually tried to overthrow the government in the Beer Hall Putsch, under German law he deserved to be shot by a firing squad. Instead he got a couple of years in a comfy cell with plenty of visitors — and a typewriter. On which he wrote Mein Kampf. (In our country, retired Weather Underground terrorist Bill Ayers became merely the mentor of a president, Barack Obama.)

Bravely Damning the German Communists in 1934

German churches were fierce, bold, and uncompromising — in their condemnations of Communism. When Nazi thugs beat up communists as the police looked on and snickered, those pastors stood up bravely. To condemn the bloodied leftists, now languishing in prison. And hadn’t they broken the law?

Just so, today many pastors are taking a principled stand against white racists. Against people whose false and wicked views are enough to get them fired from almost any job in America. (Don’t worry, opponents of same-sex marriage and then of abortion are next.) Whose race and heritage are studied in school as if they were cultural forms of cholera. Whose country is changing radically around them, who learn from their own elites that they don’t deserve to be a majority anywhere on earth. Not even in Sweden.

Brendon O’ Neill has commented on this with his usual piercing insight:

Brendan O’Neill on the poison of racial thinking pic.twitter.com/Cy3JC7Vfql

If “Asianness” were being studied in school as a disease, and most Asian countries were under unremitting pressure from massive immigration and colonization, you might not be surprised to see some Asians overreact. Even grab onto nasty and false racist ideas about their own “superiority.” It would be wrong, but comprehensible. You should approach them with reason and charity, and try to talk them out of it. Point to universal values that transcend race and nation. Urge on them the spiritual unity of man, redeemed by the cross. Remind them that we’re all wayward children of a single set of parents.

But don’t wink at those who despise and pathologize people for their race … then expect them to hear the Gospel. And don’t be like this woman, who’s marching against political violence while wearing a t-shirt that … endorses political violence.