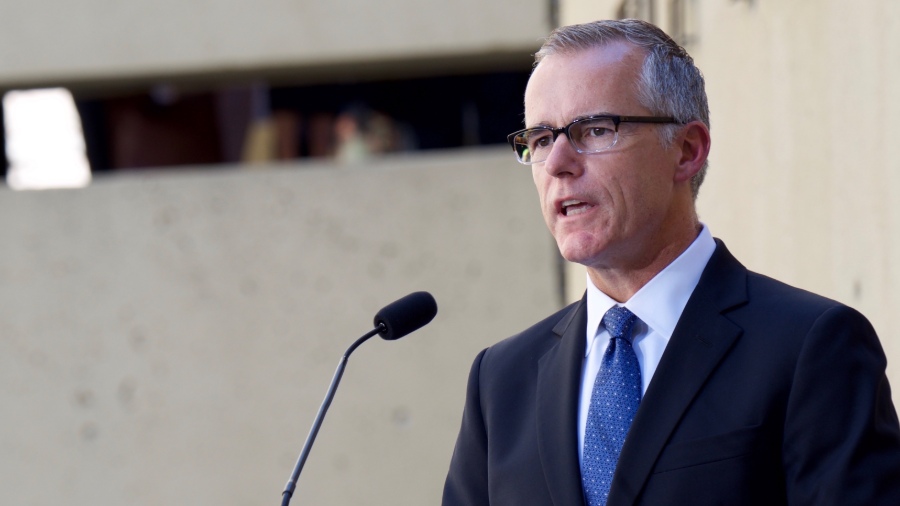 There’s an old saying that in our justice system, “you can indict a ham sandwich.” But after the recent decision at the Department of Justice not to prosecute former deputy FBI Director Andrew McCabe for lying, we’re seeing that for this saying to be true, there has to be one caveat: “unless the ham sandwich is part of the anti-Trump swamp.” In that case, the sandwich will remain unindicted and will walk free, to be picked up by CNN or MSNBC, where it will be hired as a paid contributor.

The decision not to indict didn’t come from Attorney General Bill Barr. The U.S. Attorney for Washington, D.C., sent a letter to McCabe’s lawyer saying he wouldn’t face prosecution over the leaks and related lies. Clearly, McCabe did lie about his role in the leak to reporter Devlin Barrett, then at the Wall Street Journal. He then lied some more to try to cover himself.

Inspector General Michael Horowitz’s report was blistering in its account of McCabe’s repeated lying. Legal expert Andrew McCarthy has a new piece in National Review, “Why Wasn’t Andrew McCabe Charged?” laying out the lies he told about a leak he authorized concerning the existence of an FBI investigation into the Clinton Foundation — a bogus investigation, I would add, but that’s another issue — and explaining what factors might have been involved in the decision, finally, not to charge McCabe. Compare this decision with the full-speed-ahead indictments against George Papadopoulos and Michael Flynn, and it’s easy to see the two-tier justice system at work.

The tweet sent by Lisa Page on the announcement that McCabe wouldn’t be charged says it all.

There she is, smiling broadly in a sunny restaurant window, raising her glass of sparkling red wine in a toast to her colleague, Andy. She’s wearing a t-shirt that says “I am done being quiet.” The caption: “Cheers, Andy.”

The irony is huge.  As McCarthy says, she is key to McCabe’s defense, having reportedly told the grand jury that since McCabe had the authority to approve media “disclosures” (leaks), he had no reason to lie about authorizing this one. McCarthy finds this assertion laughable. McCabe was “serially misleading investigators” (repeatedly lying to investigators) so plainly that he had to have had a reason. Also, the Inspector General found that he had orchestrated this leak for purposes of “self-promotion,” not the public interest, and that he had done this by making his superiors at the DOJ look bad. (Well, there’s something he could be, and was, fired for!)

It’s interesting that Page is so supportive of her colleague, as McCabe’s lies originally cast suspicion on her as the source of the leak. Chuck Ross at the Daily Caller has a good overview.

Page’s grand jury testimony made prosecution of McCabe more difficult, at least in McCarthy’s analysis. “It’s tough to win a case when your witnesses are spinning for the defendant,” he says. I’d say this is especially problematic when your case is in Washington, D.C., with a grand jury almost certainly infected with Trump-hate. How is it possible to win a conviction when you can’t even get an indictment from people who are automatically biased in favor of the accused?

Why Did McCabe Lie in the First Place?

Do you remember why McCabe lied in the first place? There was an internal conflict at the Bureau about the (purported) Clinton Foundation probe, stemming from the Obama DOJ pressuring the FBI to just drop it. (Part of their comprehensive efforts to rig the election for Hillary.) About two weeks before the election, McCabe was the subject of a critical article by then-WSJ reporter Barrett that questioned — with good reason, I’d add — his fitness to lead an investigation into Hillary Clinton. In particular because his wife had received a mind-bogglingly huge campaign contribution in her unsuccessful race for state senator from Clinton crony and then-Virginia Gov. Terry McAuliffe.

McCabe got ticked off about the article and responded by authorizing a leak to Barrett, apparently crafted to paint himself as independent, not under the thumb of his superiors. The DOJ, in turn, were aghast about any investigation into the Clinton Foundation being discussed publicly two weeks before Hillary’s intended coronation — I mean election.

Here’s a great “refresher” on the details from McCarthy, written at the time Horowitz referred McCabe for possible criminal prosecution.

And here’s the new piece, detailing McCabe’s sequence of lies as he kept deepening the hole he’d dug for himself. At the same time, it tempers the certainty of McCabe’s deception with the challenges of prosecuting him before an anti-Trump D.C. jury. His attorneys would surely argue he was being prosecuted for being at odds with a President they (the jurors) can’t stand. They’d identify with McCabe and feel bad for him. That’s one reason why we have such a blatant two-tier justice system in Washington, D.C.