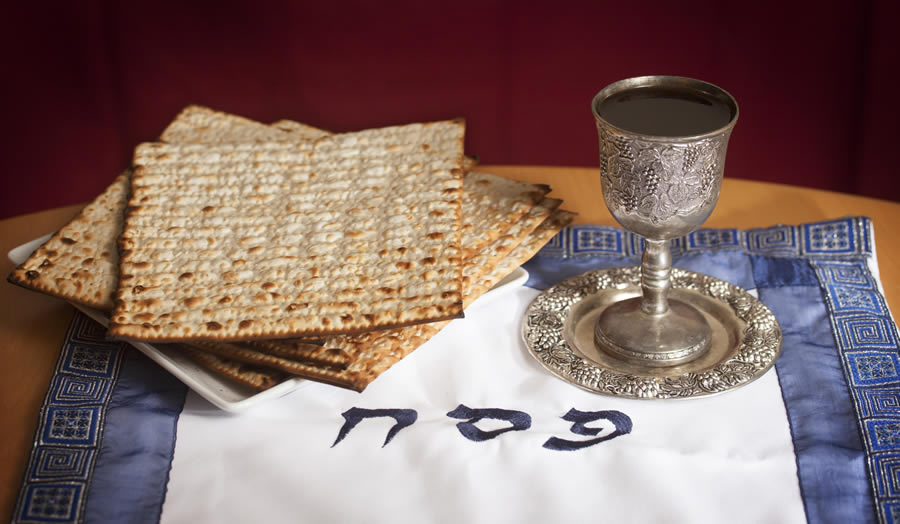 An increasing number of Christian churches, home groups, and families are partaking in Passover Seder meals these days. But is there any relevance of the symbolisms of Jewish tradition to followers of Christ? Let’s take a look.

Jews commemorate the original Passover by eating Matzah (or unleavened) bread. We read in Exodus 12:39, “They baked unleavened cakes of the dough which they had brought out of Egypt; for it was not leavened, because they were driven out of Egypt and could not wait.”

Even Christians can appreciate that from the standpoint of our Jewish roots, but it represents a whole other dimension to us! We can start at Jesus’ birth in Bethlehem. In Hebrew, it’s Beit (house) Lechem (bread), or “House of Bread.” Jesus said, “I am the bread of life” (John 6:48), and “I am the living bread that came down out of heaven” (John 6:51). Right before He was arrested, during His final Passover meal (“The Last Supper”) with His disciples, “He took bread, gave thanks and broke it, and gave it to them, saying, “This is My body which is given for you; do this in remembrance of Me” (Luke 22:19).

The Jewish tradition is for the father in the family to break the matzah and wrap the larger piece in a white linen cloth. Even its appearance is striped and pierced. These all shout from the housetops “Jesus Christ!”

On the first Passover in Egypt, God told the Israelites to kill a lamb and put the blood on the top doorpost and both side posts so that the death angel would “pass over” their house (Exodus 12).

What better symbolism for a Christian than that Passover lamb, a perfect type of Jesus Christ, Who — when we accept Him as Savior — causes the “death angel” (that entered through Adam) to pass over us.

When John the Baptist saw Jesus coming to be baptized, he said, “Behold, the Lamb of God who takes away the sin of the world” (John 1:29).

The prophet Isaiah looked into the future and said of Jesus, “He was led as a lamb to the slaughter” (Isaiah 53:7).

Moses instructed the people to take a lamb on the 10th of Nisan, inspect it for blemishes until the 14th, then slaughter it (Exodus 12:3,6. I believe Jesus rode into Jerusalem on the 10th of Nisan, was “inspected” for blemishes for four days (Pilate said, “I find no fault in this Man”), and was then crucified on Passover (the 14th) at the same time the lambs were being slaughtered.

Others explain that an egg is a traditional food of mourning, and its rounded shape symbolizes the cycle of life, expressing mourning for the destruction of the Temple. But we can be reminded that Jesus said (when asked what sign He would show them), “’Destroy this temple, and in three days I will raise it up … But He was speaking of the temple of His body” (John 2:19-21).

Eggs have certainly crept into Christians’ celebration of Easter. Many believe the tradition originated from the Anglo-Saxons in Britain during the “Dark Ages” as they celebrated the pagan goddess Eostre. However, eggs were used by early Christians to tell the Easter story, correlating a newborn chick breaking out of an eggshell to Jesus’ resurrection and the empty tomb. Interesting analogy. Especially since Jesus, who is “the firstborn among many brethren” (Romans 8:29), said, “How often I have wanted to gather your children together as a hen protects her chicks beneath her wings” (Matthew 23:37).

Even though the origin was secular — even pagan — Paul used a secular idea to make a spiritual point in Athens. While addressing their “unknown god,” he said, “As also some of your own poets have said, “For we are also His offspring” (Acts 17:28). He then used that as a springboard to preach the gospel.

The bitter herbs are often represented by horseradish, as well as lettuce (since the Torah specifies herbs, plural), and they symbolize the Jews’ bitter years of slavery in Egypt.

Each and every one of us can relate to being in bondage. We were all slaves to something before coming to Christ. Some individuals’ experiences are more conspicuous than others, but we were all slaves to the flesh. Galatians 4:7 tells us, “Therefore you are no longer a slave but a son, and if a son, then an heir of God through Christ.”

This goes hand-in-hand with the bitter herbs. The apples, nuts, spices, and honey and/or wine is a mixture that resembles mortar to remind the Jews of the bricks they were forced to make in Egypt.

I contend that as believers, we can relate to mortar in an entirely different way. 1 Peter 2:5 describes us this way: “You also, as living stones, are being built up a spiritual house, a holy priesthood, to offer up spiritual sacrifices acceptable to God through Jesus Christ.” Each and every one of us is a “living stone” in God’s spiritual house, and God is the mortar that holds us together. “And He Himself existed and is before all things, and in Him all things hold together. [His is the controlling, cohesive force of the universe.]” (Colossians 1:17, AMP)

The cup of salt water represents the tears shed as slaves in Egypt. The tradition is to dip the parsley (coming up next) into the salt water to remember those tears.

As aforementioned, we were all slaves before Christ and can certainly relate to the symbolism. And while we’re certainly not immune from tears as Christians, most of us would agree that there are far fewer tears with the Lord in our lives, as we learn how to receive by faith that “He has carried our sorrows and pains” (Isaiah 53:4). Moreover, we have hope looking ahead, as Jesus said in His sermon on the Mount, “Blessed are you who weep now, for you shall laugh” (Luke 6:21). And He promises in Revelation 21:4 that He will ultimately “wipe away every tear.”

The Parsley is a symbol of life and can also be symbolic of the early spring, the time of Passover. Others feel it’s a sign of renewal, but by dipping it into the salt water (or tears), they remain aware of the challenges that still lay ahead.

As far as renewal, 2 Corinthians 5:17 (AMP) tells us, “If anyone is in Christ [that is, grafted in, joined to Him by faith in Him as Savior], he is a new creature [reborn and renewed by the Holy Spirit].”

Is Easter a Pagan Holiday?