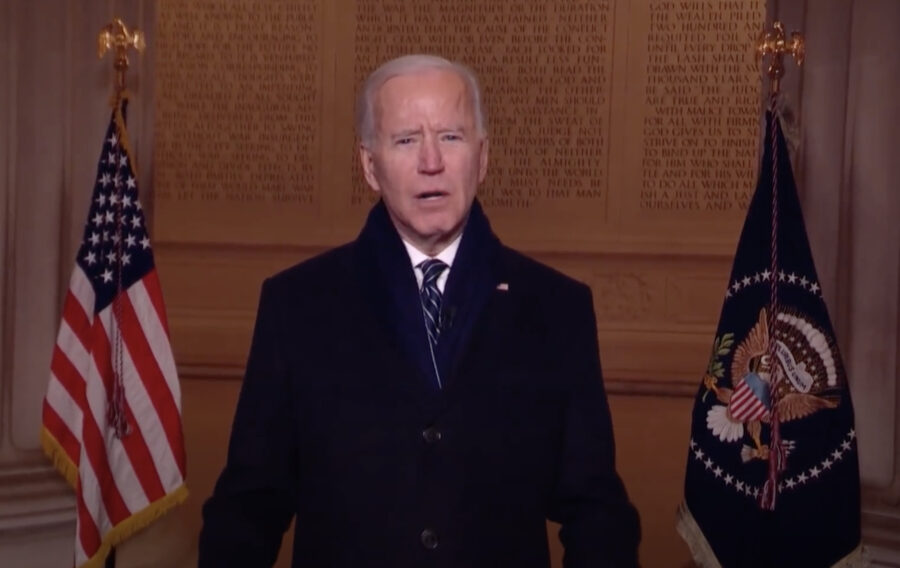 The mask is off. You feeling snookered, hoodwinked, bamboozled yet, America?

Where’s the face of Mr. Unity and Moderation? Gone. Instantly gone. Biden, the Democrats and their Big Tech and Big Media partners took only three days to pull away the mask and expose their radical, fanatical program to weaken America.

In fact, Biden broke such a sweat in his rush to Make America Sad Again he had to take Saturday afternoon and Sunday off.

Or maybe he just wanted to step back and admire his handiwork.

So what has Biden done? He’s …

Begun his war on innocent life by seeking to codify abortion in Federal law.

Begun his war on wages by re-opening the floodgates for illegal immigration.

Begun his war on neighborhoods by halting deportations and emptying ICE detention centers, even of criminals. You are now literally more likely to be detained for being a Trump supporter than for being an MS-13 gang member in the country illegally.

Begun his war on our sovereignty by ordering illegal immigrants to be counted in the census, thus impacting congressional districting.

Made life easier for sex traffickers and human smugglers. As noted in our book The Politically Incorrect Guide to Immigration, 30-80% of girls and women are sexually assaulted while being smuggled to the U.S. Fostering more illegal immigration means open season on thousands of women and girls.

Ratcheted up his war on girls with a mandate that biological boys be allowed to compete against them in school sports simply if they claim to “identify” as female.

Then we have the real wars Biden is itching for. Reports are U.S. troops have re-entered Syria. Biden’s also reconsidering Trump’s troop withdraw deal with the Taliban, which has been bringing our finest home from Afghanistan. And don’t forget Iraq. Biden is considering reversing Trump order to bring our troops home there as well.

COVID ‘Suddenly’ Not a Problem

Miracle of miracles, Joe Biden taking the oath of office has done wonders to COVID.

Suddenly, liberal lockdown cities and states are saying indoor and outdoor dining is fine. And California is set to lift its stay-at-home orders.

Suddenly, WHO is recognizing that PCR tests produce vast numbers false positives … meaning that the number of COVID cases was dramatically inflated … as long as Trump was president.

Suddenly, after Trump was hammered for limiting the CDC’s role in the COVID fight, and stories he was interfering with CDC efforts, Reuters reports that the CDC was the problem. Think they only discovered that this week?

Suddenly, COVID is not an impediment to voting … and the best way to ensure a fair election is to vote in person. Amazon wants in-person voting for its upcoming unionization vote … because mail-in voting isn’t conducive to a “valid, fair and successful election.” This after Amazon axed Parler for hosting people who say mail-in voting led to an invalid, unfair and corrupt election.

Joe Biden: “There’s nothing we can do to change the trajectory of the pandemic in the next several months” pic.twitter.com/9gPOSb6L0l

Taking the Mask Off

The virus is going to virus. And Swamp hacks are going to hack.

Joe and the Democrats stuffed the Capitol Building with thousands of National Guards troops in very close quarters, who then hung out with tens of thousands of additional National Guard troops for the Biden production called “Be Afraid. Be Very Afraid.” Who then were forced again into close quarters when squeezed into a freezing garage. The inevitable has happened. A COVID outbreak among our brave (and abused) troops.

But at least Joe and Nancy got their photo op of the Nation’s Capital as a military camp to ward off … well, who? The only violence Inauguration Day and since has been from Antifa. The leftist terror group Biden can’t even condemn by name has again set the northwest aflame.

He Gets to Celebrate. Do We?

When asked about it, the White House response was Biden was “celebrating.” His celebrations are far more important than your celebrations.

His radical dreams are more important than your jobs.

His failed military policies of the past are more important than the future of our troops.

Feeding the abortion industry is more important than protecting the most innocent, defenseless Americans.

Illegal immigrants’ convenience is more important than our sovereignty or your safety.

The mask is off. His true face is revealed.

Biden voters, is that what you voted for?

Al Perrotta is the Managing Editor of The Stream and co-author, with John Zmirak, of The Politically Incorrect Guide to Immigration. You can follow him at @StreamingAl on Twitter and Parler, if his Twitter account is restored and Parler is allowed to again exist. You can also follow him @Streaming on Gab and MeWe.