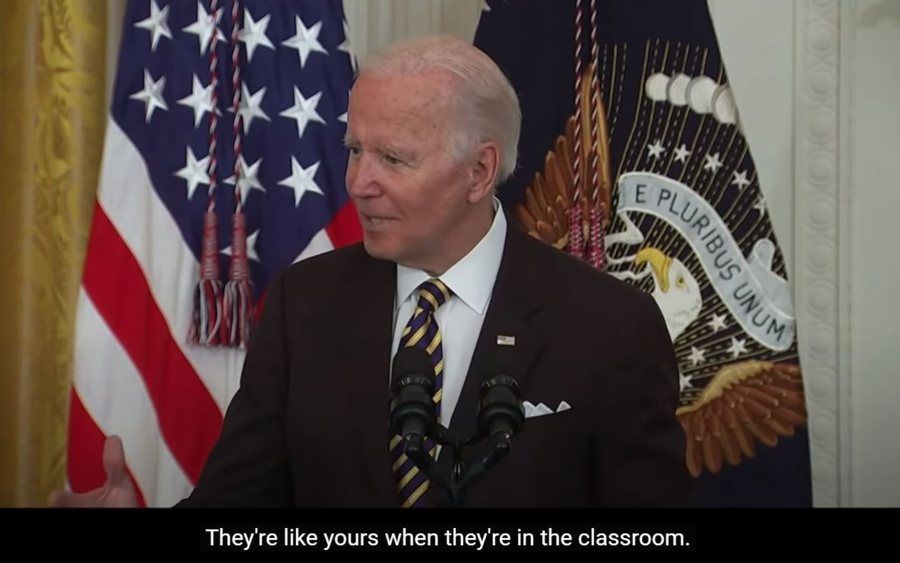 Schools are becoming indoctrination factories, trying to turn children against their country and their own parents’ values. It’s what the teachers unions intend.

Our Kids Belong to Teachers?

Amazingly, that’s just fine with President Joe Biden, who told a gathering of teachers and union bigwigs on April 27 that the kids are “yours when they’re in the classroom.” That wasn’t just a Biden stumble. He repeated it for emphasis: “They are all our children … They are not somebody else’s children.”

Sorry, Joe. But parents have a right to know what their children are being taught, and to set limits. State legislators in at least 12 states have introduced bills requiring teachers to post teaching materials, including books and videos, on a website for parents to inspect before their kids see them.

Good teachers will have no problem with that. But ideologically driven teachers, as well as the unions, are fighting back. That includes Randi Weingarten, head of the American Federation of Teachers. As she launched Teacher Appreciation Week — and most teachers do deserve our appreciation — Weingarten smeared classroom transparency requests as the work of political “extremists.”

Concerned parents are not political extremists, but Biden is joining the attack against transparency, parroting the unions. He and most Democrats in Congress are teachers union flunkies. Democrats delivered hundreds of billions in COVID relief to school districts, including $46 billion to teach critical race theory. By the way, that included $9 billion for CRT in New York schools.

Kowtowing to the Teachers’ Unions

Biden also kowtowed to the unions to prolong school closings and masking, and then allowed the unions to dictate what the Centers for Disease Control and Prevention would require to reopen schools.

As a candidate, Biden vowed to end federal support for charter schools, and his new regulations have that obvious intent — another obsequious gesture to the unions.

Weingarten and National Education Association President Rebecca Pringle probably have more power in the Biden administration than any senator or cabinet member. That would be fine if they were wielding their clout to ensure children acquire strong reading and math skills. But that’s not their agenda.

The American Federation of Teachers website shows the union is more committed to political activism than reading and STEM instruction. The site urges visitors to “take action” on student debt, voting rights and passing the Equality Act. But it never mentions that fewer than half of New York City’s third to eighth graders can read at grade level. Or that, overall, students in the U.S. rank behind many other countries in math. No call to action there.

The AFT website also declares that the U.S. is facing health, economic and racial challenges “all made worse because of Donald Trump.” How can the 74 million people who voted for Trump in 2020 entrust their children’s education to an organization so politically biased?

The Democrats Join the Fight Against Parents

Joining the unions to fight a parent’s right to know is none other than the Democratic Party. No surprise. The unions give 94% of their money to Democratic candidates and parties, according to data-tracking nonprofit Open Secrets.

Tit for tat. Democrats are demonizing Republicans who support curriculum transparency. Sen. Chris Murphy (D-Connecticut) calls them “mean, hateful and spiteful.” Washington Post columnist E.J. Dionne Jr. says Republicans will be forced “to own the meanness.” Meanness for what? Keeping discussions of sex out of elementary school classrooms?

Truth is, no one advocates bullying gay kids. All children deserve kindness. But that doesn’t mean kindergartners should be instructed in how boys can transition to become girls, or vice versa. Nearly half of teachers agree these issues don’t belong in the classroom, according to an Education Week poll.

Parents Should Decide What Schools Teach

Biden often jokes that he sleeps with a teachers union member — the same one — every night: First Lady Jill Biden. Cute, but he shouldn’t sell out to the rest. Parents care more than anyone else about their own children. They should decide what schools teach, not the far-left ideologues running the teachers unions.