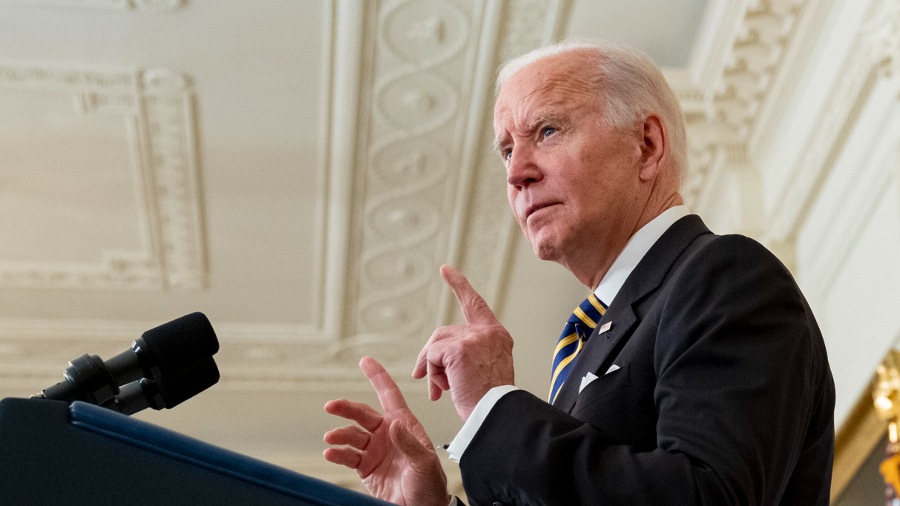 President Joe Biden delivers remarks during a 2022 National Teacher of the Year and State Teachers of the Year celebration event, Wednesday, April 27, 2022, in the East Room of the White House.

God is all about “diversity.” Just go to the zoo, and you’ll see. Wouldn’t you have loved to listen to the Godhead on day six? “Let’s make this one spotted … and this one striped … and a long neck on this one.”

Even the foods we eat are diverse in taste, nutrients, shapes and color.

And ever since God scattered the human race at the Tower of Babel (Genesis 11:8), our different environments and varying gene pools, through the millennia, have made us incredibly diverse in many respects. We come in a variety of skin colors, hair colors, shapes, sizes, personalities, languages and fingerprints.

Diversity can be a good thing. But there’s something terribly wrong with the President of the United States openly making it his top priority in filling the highest positions in our government. He’s throwing qualities like competence, leadership, decision-making, problem solving, and IQ completely out the window. And the American people are paying an enormous price (literally).

Start with Kamala Harris, the first woman/black/Asian vice-president. Of course, they made sure she was sworn in by the first Latino Supreme Court Justice, Sonia Sotomayor, using a Bible that had belonged to Thurgood Marshall, the first black SCOTUS justice.

Any or all of that would be fine if it weren’t such a cult-like obsession with this administration. But it’s hard to imagine a less competent vice-president. In 1988, Lloyd Bentsen famously said to Dan Quayle, “Senator, you’re no Jack Kennedy.” I say, “Kamala, you’re no Dan Quayle … or any other vice-president we’ve had.”

As “Border Czar,” she has failed miserably, allowing the worst invasion of our southern border in U.S. history. She’s never even been there to look at it. Flying to El Paso for a photo op and some authentic Mexican food doesn’t count. That wasn’t where the problems were.

As for her communication skills, here’s a compilation of some of Kamala’s amazing elaborate “word salads”:

I made a compilation video of Kamala Harris world salads.

I apologize or you're welcome. pic.twitter.com/vTl5qZGHcP

Biden’s pick to replace Stephen Breyer on the Supreme Court was Ketanji Brown Jackson. She was celebrated as the first black woman who would sit on the high court, but when pressed by Senator Blackburn, she couldn’t define “woman”: “No, I can’t … I’m not a biologist.” First graders could answer that question, yet Brown was either (1) too stupid or (2) too radically woke to answer the question. Option (1) is obviously wrong, or so we would hope. But either possibility is dangerous in a position that’s supposed to call the “balls and strikes” for our Constitution.

Piers Morgan tweeted. “Ridiculous … I’m not a brain surgeon, but I know what a brain is.” Sara Carter’s comment was, “Wow, our WOKE world has come to this that an educated woman can’t even define herself.”

White House Press Secretary Karine Jeane-Pierre is clearly “in over her head” and a worse gaffe-machine than her boss. But at least she’s the first black and gay person in that position.

She awkwardly flips through her notebook trying to find an answer and then often concludes, “I don’t have anything on that.”

Two minutes of video reveal how useless she can be in her press role:

Our transportation system is in the worst shambles in modern history, but at least we have the first gay Transportation Secretary.

While mayor of South Bend, Indiana, he couldn’t even fix the potholes in the streets of his city. In 2019, the South Bend Tribune reported that their city had the ”worst pothole situation in the state.” I guess Biden hasn’t read about that “parable of the talents” thing (Matthew 25).

Now in his new federal government role, at the peak of the worst supply-chain crisis in living memory — with dozens of ships moored and waiting off the West Coast, truckers protesting, disturbingly high numbers of flight delays — Buttigieg took a maternity leave. But wait, Pete, you didn’t have the baby! Maternity leave is largely to give a woman time to heal from the intense labor and delivery of the child. The only “delivery” Buttigieg could have experienced that day was from Uber Eats.

That was an insult to women, Mr. Secretary. You should ask some women what real motherhood is all about (HINT: Don’t ask Ketanji Brown Jackson).

The scariest Biden appointment of all is Rachel Levine, a man (born Richard Levine) who dresses like and pretends to be a woman. He is the Assistant Secretary of Health and Human Services. Had Bernie Madoff been placed over the U.S. Treasury, it wouldn’t have been any more bizarre.

According to The National Pulse, Levine has given lectures on how to perform sex changes on children since at least 2012. He has also warned about the dangers of going through “the wrong puberty.” You know, as in “God screwed up, so you’d better fix it.” He has lectured parents on letting their children decide what gender they are.

Some of those kids are still trying to figure out if they want to be Batman or Spider-Man. But “trans” box? Check!

For months, Janet Yellen claimed that U.S. inflation was “transitory.” Even we average folks with some common sense knew that wasn’t short-term, and couldn’t be — not after the government dropped over a trillion bucks into the system and crippled our domestic energy supply.

But hey … we have the first female Treasury Secretary.

She later admitted she was wrong: “There have been unanticipated and large shocks to the economy … [that] I, at the time, didn’t fully understand, but we recognize that now.”

Secretary Yellen, none of that was “unanticipated” to any halfway well-trained economist, or even to anyone with half a brain here in the rank and file. We were able to “fully understand” it back then.

But what does our economy matter? Congrats on being the first woman in the position!

Another first: Lloyd Austin is the first black Secretary of Defense. Congratulations! But the U.S. pullout from Afghanistan was quite possibly the most disastrous foreign policy blunder in American history.

He has gone full “woke” in our military, even appointing a “Chief of Diversity & Inclusion” of our special forces like the SEALS and Delta Force. He has compared Trump to Hitler, and he has promoted BLM propaganda.

I’m not against diversity. After all, we believers are “all one in Christ Jesus” (Galatians 3:28). Plenty of Trump appointments were members of minorities, were women, and/or were gay. The difference was they were competent.

Trump’s priority was to find the best qualified individuals and let the “diversity” chips fall where they may. That’s the right way to see one another in all our differences.