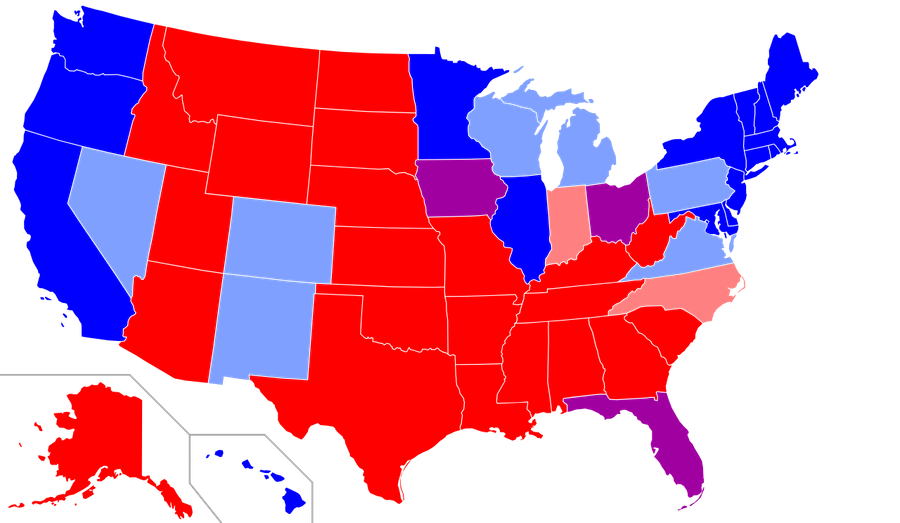 Senate Majority Leader Mitch McConnell, R-Ky., touched a nerve recently by suggesting the federal government shouldn’t bail out mismanaged blue states. They should be forced to file bankruptcy instead. Congressional Democrats are working on legislation to give states bailouts due to COVID-19.

But is that the real reason? Is it a good reason to transfer money to states in financial trouble long before anyone heard of COVID-19?

President Trump says no. He tweeted, “Why should the people and taxpayers of America be bailing out poorly run states (like Illinois, as example) and cities, in all cases Democrat run and managed, when most of the other states are not looking for bailout help? I am open to discussing anything, but just asking?”

Democrats have an answer. They say the states should get the money, because blue states give more to the federal government than they get back from it. Red states take more than they pay. The bailout’s just returning the favor.

As for blue states allegedly getting back less, what numbers are they looking at? It is true that red states receive 35.75% on average of their budgets from the federal government. Blue states receive only 30.80%. But the blue states get a lower percentage because their total budgets are far larger due to all the bloat and waste. The 10 states in the best fiscal condition are almost all red states. The 10 states in the worst condition are almost all blue.

Why does this matter? The higher the taxes, the more mismanaged a state is. CNBC examined the infrastructure of every state, including roads, airports, water systems and ports. The places with the worst-rated infrastructure are six Democratic states, which also rank among the highest in taxes collected per resident: Connecticut, Hawaii, Maryland, Massachusetts, New Jersey, and New York.

The poorest performing states are generally the highest taxed states.

Steven Malanga at City Journal looked at airports as an example of how blue states mismanage money. He found that three of the worst airports, all located in NYC, are run by a port authority that has “enormous taxing power.” It gets money from “fees, tolls, fares, and rents that it collects everywhere from bridge and tunnel crossings to the airports themselves.” The authority uses this to “to subsidize lavish salaries and benefits for workers and politically favored, but super-costly, money-losing building projects.”

Blue States Get Back More Per Capita

Kyle Sammin at The Federalist found that if you look at the amount of money the federal government gives to states on a per capita basis instead, blue states get more; $2,124 per resident. Red states receive just $1,879 on average.

Matt Palumbo, writing at The Dan Bongino Show, found that even if red states receive more in federal welfare, it’s not going to Republicans. Those on public assistance, as well as long-term unemployment, are overwhelmingly Democrats.

To try and rectify some of the disparity, Congress passed the Tax Cuts and Jobs Act (TCJA) in 2017. It put a cap of $10,000 on state and local tax deductions (SALT). Without it, rich people in blue states that had bloated, wasteful, high state and local taxes were able to deduct those ridiculously huge tax numbers from their federal taxes, resulting in those states sending far less money to the federal government.

It was very unfair to taxpayers living in sensible states without bloated taxes, who didn’t get the huge deductions. Adam Michel at The Heritage Foundation observed, it “forces people in lower-tax states to subsidize more expensive governments elsewhere.” He provided an example, “The average millionaire living in New York or California deducted more than $450,000 worth of state and local taxes; the average millionaire in Texas deducted only $50,000 and therefore paid close to $180,000 more per year in federal taxes.”

Basically the reason the Democrats are protesting the SALT cap is to help rich Democrats in blue states avoid the consequences of their states’ wasteful spending.

So basically the reason the Democrats are protesting the SALT cap is to help rich Democrats in blue states avoid the consequences of their states’ wasteful spending. Does this surprise anyone? Democrats always say they’re for the poor, but their actions show they favor the rich. The only time they care to throw taxpayers’ money at the poor is if they think it will get the poor to vote for Democrats.

A lot of the blue states were already in fiscal trouble before COVID-19. Bailing them out also bails out their irresponsible policies. Yes it’s unfair that a lot of people who are fiscally responsible in those states are going to be hurt without a bailout, including Republicans. But where does the buck stop? I didn’t like the liberal policies of my home state, Washington, so I moved to Arizona in my mid-20s.

Governors in red states are issuing public invitations to people in blue states to move to their states. Moving companies report more people moving from blue states to red states than vice versa. Americans are getting fed up with the high taxes and mismanagement in blue states. So why should we reward it, continuing the miserable status quo? At a minimum, if Congress is going to bail out states, there needs to be strict requirements placed on the funds so blue states can’t squander it.

And Democrats and their comrades in the mainstream media need to stop the hypocritical rhetoric about blue states subsidizing red states. You can’t call for soaking the rich while complaining at the same time that they are paying more in taxes.