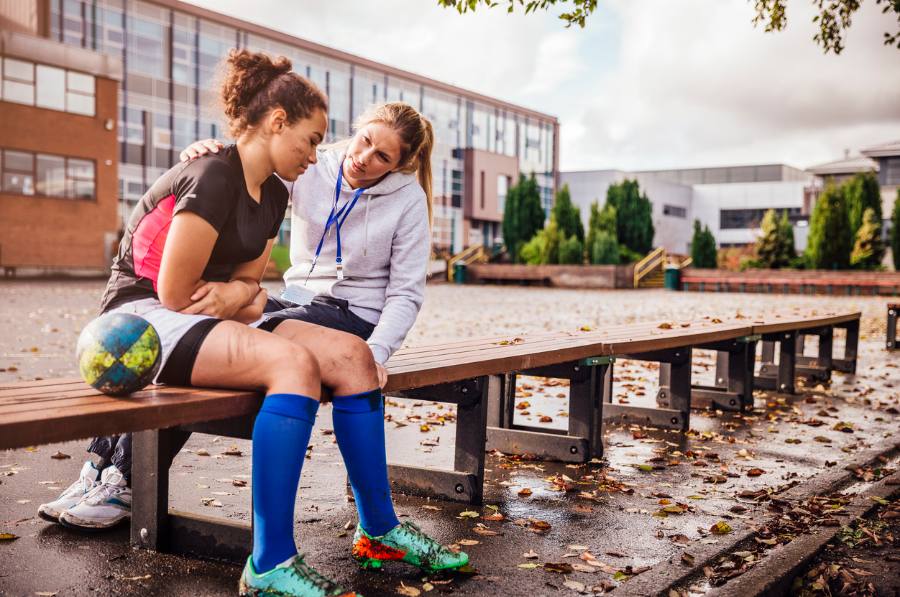 That’s exactly what could be happening now in female rugby games, and the insanity needs to stop before someone gets seriously injured.

This is not just unfair. It is dangerous.

“Being Forced to Prioritize Hurt Feelings Over Broken Bones”

A September 28 story in the UK’s The Times announced that, “Too strong trans players in women’s rugby are driving referees away.”

Then, quite remarkably, the story reported this: (And remember, this is The Times, not The Onion. No satire here!) “Rugby referees are quitting the women’s amateur game because they fear rules allowing transgender women to play will lead to serious injuries. Referees say they have been warned not to challenge bearded or heavily muscled players appearing for women’s teams.”

How about reading this last sentence again slowly and out loud, digesting every word? Am I the only one who wants to scream at the top of my lungs, “Has the whole world gone totally crazy?!”

Under the condition of anonymity, one referee told the Times, “Being forced to prioritize hurt feelings over broken bones exposes me to personal litigation from female players who have been damaged by players who are biologically male. This is driving female players and referees out of the game.”

Interestingly, just last month, a new study out of Sweden revealed that, “Biological males who identify as transgender women are likely to retain strength advantages over biological females, even after undergoing 12 months of hormone therapy.”

Well, what do you know!

“The researchers who carried out the study found that biological males who underwent 12 months of hormone therapy lost muscle mass in their legs, but still retained leg strength.”

And that’s why, earlier this year, a British Olympian criticized Olympic rules that would allow biological males to compete against biological females. According to medal-winner Sharron Davies, “‘quite a lot’ of female athletes . . . are afraid to publicly share their concerns about biological males who identify as transgender women competing in women’s sports.”

This is grossly unfair and it really must stop.

Earlier this year, in Australia, “Hannah” Mouncey, “formerly known as Callum and a member of the Australian men’s handball team in 2016,” withdrew his nomination “from the draft for the Australian Football League’s professional women’s competition and accused the league of blocking her [sic] from playing in the top flight.”

I would hope that the league would block his efforts to play along with the women. Does it take a rocket scientist to figure this out?

Now, in the States, all this is coming to a head in the form of a case just heard by the Supreme Court.

As explained by the ADF, “The Equal Employment Opportunity Commission filed suit over the discharge of an employee who refused to comply with a Michigan funeral home’s sex-specific dress code, which requires employees to dress in a manner sensitive to grieving family members and friends. The EEOC attempted to force the business to allow a biologically male employee to wear a female uniform while interacting with the public.”

At question is the meaning of the word “sex” under federal law. Does it refer to biology, as it was originally intended to, or does it include perceived gender identity?

In her op-ed for the Wall Street Journal, titled, “Justice Ginsburg, a Woman Isn’t a ‘Demiboy’,” Ashley E. McGuire wrote, “The problem with diluting the meaning of sex is more than rhetorical. It weakens the legal status of the sex that laws such as Title VII and Title IX are designed to protect. Women’s rights hinge on our clearly defined status as women. We have endured centuries of discrimination because of our sex. In seeking to strip the term ‘sex’ of legal meaning, gender-identity advocates would turn the clock back 55 years for women.”

Indeed, the radical transgender movement, which seeks to impose itself on society as a whole, threatens women’s rights on many fronts, not to mention challenges the very meaning of female.

We Need to Push Back

If we care about the rights of our daughters, our wives, and our mothers, we need to push back against this radical activism. And we need to hope and pray that the Supreme Court justices make a strong, definitive, and correct ruling.

This, of course, does not mean that we mock the very real pain experienced by those who identify as transgender. But it does mean that we say to everyone involved, “Perceptions do not trump reality and biology is not bigotry. The ultimate goal is to find wholeness from the inside out.”

For my part, I look forward to the day when I no longer have to add the word “biological” before “female” or “male” to make myself clear.

And, as if we need one more sobering word, a new report speaks of a “tidal wave” of young people who now regret transitioning to the opposite sex. One of them is Charlie Evans, now 28, who was born female but lived as a male for 10 years.

Evans said, “I’m in communication with 19 and 20-year-olds who have had full gender reassignment surgery who wish they hadn’t, and their dysphoria hasn’t been relieved, they don’t feel better for it.”

That is even more dangerous than a female rugby player getting injured by a bigger, stronger male.

When will we wake up and put a stop to this social madness?