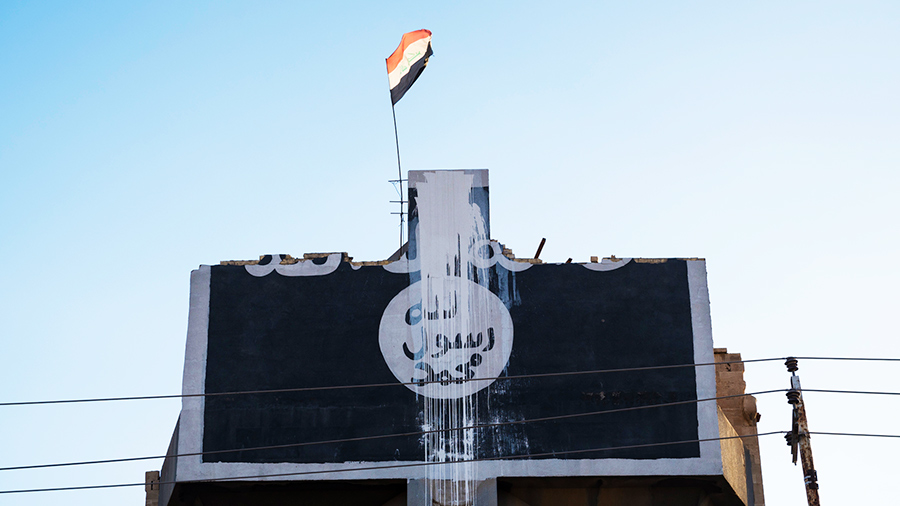 An Iraqi flag flies from the top of the heavily damaged Church of St. Ephraim, a Syriac Orthodox church, in Mosul, Iraq, in the months after this part of Mosul was taken from ISIS. The ISIS emblem was painted on the front of the building during the ISIS occupation of Mosul.

My previous column about Rudyard Kipling’s great poem “The Gods of the Copybook Headings” was a long way of making simple but crucial point: A lifetime of deferring to the self-styled elites in this country has taught otherwise rational, intelligent people to filter out obvious truths, in favor of “nuanced,” “sophisticated” lies, or manifest nonsense. They learn the slogans required for social acceptance and promotion.

It takes a college education, maybe even a master’s degree, to really convince oneself that there are actually 47 genders, instead of two. Likewise to treasure the idea that “real Marxism has never been tried.” Could we say the same of fascism, then? Why not?

It takes years of training in intellectual conformism to condition our God-given minds to operate that badly and suppress such blatant questions. But millions of Americans have put in the effort, and we can all see the results in our spiraling economy, broken borders, and corrupting, chaotic schools.

Scapegoats Need Guns More than Anyone

Let me bluntly state one such brutally obvious truth: In a society where guns are forbidden to private citizens, the least popular groups are those most endangered. This is especially true if the government isn’t committed to protecting those friendless minorities (as few governments historically are, over the long haul — eventually there comes a Pharaoh who knew not Joseph).

This truth was obvious in America in the backlash after Reconstruction, when local and state governments in the South moved to reimpose white supremacy. Some of the first gun control laws in America were passed as Jim Crow measures, to strip free blacks of the power to defend themselves against vigilantes and the Klan — or against white-led race riots like the one that devastated Tulsa, Oklahoma in 1921.

During the Tulsa Race Massacre, which occurred over 18 hours from May 31 to June 1, 1921, a white mob attacked residents, homes and businesses in the predominantly Black Greenwood neighborhood of Tulsa, Oklahoma. The event remains one of the worst incidents of racial violence in U.S. history, and, for a period, remained one of the least-known: News reports were largely squelched, despite the fact that hundreds of people were killed and thousands left homeless.

Why Trust an Anti-Christian Government with Our Families’ Safety?

As modern American culture becomes inexorably more hostile to orthodox Christianity, with its “outdated” sexual morals and links to our nation’s demonized past, that means that gun control will be especially dangerous for Christians. This isn’t a deduction but a grim observation.

In the wake of the 2022 overturning of Roe v. Wade, dozens of churches and church-linked crisis pregnancy centers were vandalized or attacked — and the Biden administration did absolutely nothing, didn’t even condemn the incidents. But the same administration moved aggressively to suppress “misgendering” of “trans” service members in the U.S. military. Some “vulnerable” groups are more equal than others.

The Chaos Unleashed by Neocons and Liberals

Nobody can really trust the modern secular state with a monopoly of violence. But unpopular minorities can trust it least of all. The Christians of the Middle East learned this lesson in an especially bitter fashion in just the last 15 years. The grim events that took place after the U.S.’s blundering conquest of Iraq, and the “Arab Spring” foolishly promoted by our own State Department, offer the observer almost a controlled laboratory experiment in the different outcomes for disarmed Middle Eastern Christians, and those who have the chance to arm and defend themselves.

Let us consider the fates of two relatively similar communities of Christians, each of whom has been present in the region since the age of the Apostles, each of which endured centuries of Arab, then Ottoman occupation: The Syriac Christians of Syria, and the Chaldean and Assyrian Christians of Iraq. As of September 11, 2001, each group was in a relatively similar situation: a small, unpopular minority, subject to suspicion and envy on the part of Muslim majorities. Each was totally dependent for protection from jihad violence on a secular, Baathist dictatorship.

And each was kept disarmed, politically powerless, but physically safe by a regime that valued its credentials as religiously tolerant. The U.S. invasion in 2003 destroyed the regime of Saddam Hussein, dissolved the Baathist party, and unleashed the long-simmering forces of inter-religious hatred. The once dominant Sunni minority battled the long-suppressed Shi’ite majority, and both battled the comparatively secular Sunni Kurds. The one group which all the others saw no reason to protect, and which many scapegoated for the invasion by U.S. “crusaders,” were the helpless local Christians.

George W. and Obama Both Winked at Christian Genocide

The U.S. government under both George W. Bush and Barack Obama pursued the same policy toward the persecution of Christians: they ignored it completely. Even though the U.S. invasion had unleashed that violence, and resentment of Americans encouraged it, neither administration showed any initiative in protecting Christians from religious violence. They did support the provisional government the U.S. had installed, which adopted a policy of strict gun control for private citizens. Of course, Muslim militias ignored such laws completely. However those laws did help prevent hunted Christians from obtaining the firearms that might have helped them resist persecution.

The result was miserable and predictable. As the Associated Press reported in 2021:

Iraq was estimated to have nearly 1.5 million Christians before the 2003 U.S.-led invasion that toppled dictator Saddam Hussein. They date back to the first centuries of the religion and include Chaldean, Syriac, Assyrian and Armenian churches.

Now, church officials estimate only a few hundred thousand, or even less, remain within Iraq’s borders. The rest are scattered across the globe, resettling in far-flung places like Australia, Canada and Sweden, as well as neighboring countries.

In the summer of 2014, fighters belonging to the Islamic State of Iraq and the Levant swept over the northern city of Mosul and seized a broad swath of the country, including towns and villages in the Nineveh plains of northern Iraq.

Thousands of Christians found themselves fleeing once again the militants’ advance, taking refuge in Iraq’s northern Kurdish region or leaving the country. Over the next few years, the extremists killed thousands of Iraqi civilians from a variety of religions. They also destroyed buildings and ruined historical and culturally significant structures they considered contrary to their interpretation of Islam. Militants from the Islamic State group demolished religious and historic sites, including monasteries, mosques, tombs, shrines and churches in Syria and Iraq.

The story of Mosul’s conquest by ISIS is particularly chilling. A city of 1.6 million people, with many thousands of Christians, was taken over in a few hours by a few hundred armed ISIS militants. The disarmed civilian population was utterly helpless to resist.

Today, the remaining Christians in the Nineveh Plains are struggling with Iraq’s Shiite dominated government for the right to obtain weapons to protect themselves against the next collapse of order. The Christian community in the country, which endured more than 1,000 years of Muslim occupation, could not survive 10 years of American-style gun control.

The story of Christians in Syria provides an illuminating and uplifting contrast, as I will unpack in my next column — the last in this series on religious liberty and gun rights.