Arizona Voters: You are Being Duped by the Kyrsten Sinema Campaign 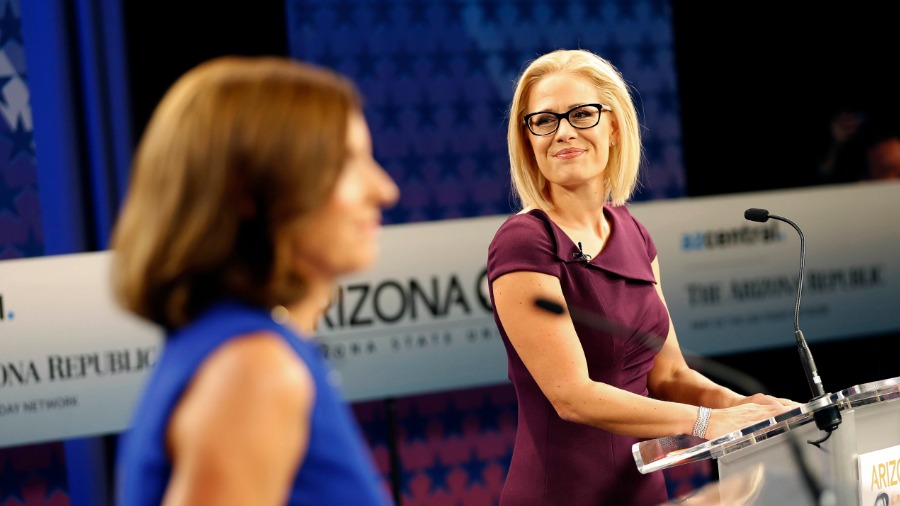 A week out, one has to ask, what is going on in the Arizona Senate race? In a contest between former U.S. Air Force fighter pilot and 26-year veteran Martha McSally, who seems to be a stellar Republican candidate, and Democrat Kyrsten Sinema, polls show the two competitors in a tight race. Unless Sinema’s own description of Arizona as “the meth lab of democracy” is true, it’s hard to account for her competitiveness at this point. It shouldn’t be close. But Project Veritas’ new undercover video offers a clue as to why it is.

To lure moderates, she’s pretending to be one.

In the past, Sinema has said and done some controversial things. She has called Arizona voters “crazy.” She said her state was famous… in a “Lindsay Lohan” sort of way. After 9/11, she told a radio host that, yes, if he wanted to run off and join the Taliban, that was “fine. I don’t care if you want to do that, go ahead.” McSally has taken heat for calling Sinema’s remark treasonous, but I can easily see why she, someone who fought the Taliban, would use that word.

Also, I wonder what Andrew C. McCarthy, who helped prosecute the Blind Sheik after the first World Trade Center bombing, would think about her promotion of an event at Arizona State University that featured radical lawyer Lynne Stewart, who had represented that terrorist and helped him communicate with his terrorist organization while in prison. Oh, wait, I don’t have to wonder, because he wrote about it  back in October. Everyone registered to vote in Arizona needs to read it, particularly the last paragraph.

Sinema also led anti-war protesters while wearing a bright pink tutu. (Yes, a fact check shows she actually did this, at a campus event she described as “an expression of creativity and of self” in conjunction with Women’s International Day.)

The problem is that middle-of-the-road Arizona voters haven’t been aware of just how far-left Sinema is, because she has been trying to pass for a moderate.

One would hope that her pink tutu would backfire as spectacularly as Texas gubernatorial candidate Wendy Davis’ pink tennis shoes did. (Wendy who??) As you might recall, she wore the cute pink tennies on the floor of the Texas legislature while filibustering for 13 hours against a bill to regulate abortion clinics. I digress.

She Can’t Appear Too Progressive

No one could present a stronger contrast to Sinema than conservative Martha McSally, who served six tours of duty in Iraq and Afghanistan.

But James O’Keefe may have put his finger on the reason for the tightness of this election. The problem is that middle-of-the-road Arizona voters haven’t been aware of just how far-left Sinema is, because she has been trying to pass for a moderate, to deceive Arizona voters at least until the polls close on election day. She knows she’s not in touch with the majority of Arizona voters, so she has to fool them. Project Veritas has gone undercover once again, this time to talk with some of her campaign workers — not just the underlings, but people at the top — and they made it clear, almost with pride, that she’s pretending to be something she’s not.

For example, Michelle Davidson, Sinema’s campaign manager, said, “this is why I think Kyrsten’s approach is so, I think, important. We can’t be talking about an assault weapons ban. We can’t, right?” She goes on to mention some of the conversations they CAN have about guns, touching on mental illness, background checks and such, rather than a flat-out ban. It’s the same with immigration. They can only chip at the edges of a controversial issue, taking care to avoid mention of what she’d really do if elected.

There’s a lot of very conservative people in Arizona and so she can’t alienate the conservative or moderate conservative voters by being super pro. … She is pro-choice. She is very liberal, she’s progressive. But she doesn’t, in this election, want to draw too much attention to being progressive because she’s trying to be more — that’s why I think she took so much Democratic help, too. Otherwise, she wouldn’t have won.

It occurs to me that she probably got as much “Democratic help” as she did because she IS so far to the left. But according to Fromm, she can’t appear too progressive because “she has to capture all the moderate voters.” She goes on: “Because Arizona is a red state, technically … a very important state for this election. … That’s why she goes, ‘I’m good for Arizona’ — that’s usually what she’s, like, all about.”

Along the same lines, according to another field organizer, Madison Snarr, “She had to play centrist to move up, become powerful.”

As for offering citizenship to those here illegally, Sinema herself, when out of the public eye, offers a candid opinion: “I believe that we should offer citizenship to every person who’s in this country, who isn’t bad. You know, if you haven’t committed a bad crime, you know, then you should get a path to citizenship. That’s what I believe.” The independent and moderate Arizonans who will swing the election one way or the other and who may disagree probably don’t know this.

She also says on camera that her strategy involves reaching out to independents, moderates, even conservative Republicans. No wonder she has to hide who she is.

With a six-year Senate term, Sinema will be freer to settle in and vote as a progressive.

Progressives excuse and even respect this kind of duplicity. In most states, it’s the only way they can win. In general, polls tend to show that, nationwide, only about a quarter of the population would describe themselves as very liberal. But politically-active Democrats, the ones who vote in primaries, work on campaigns, donate money and run for office, are increasingly very, very liberal — even socialist. They know they can’t win without moderates, though, so they talk the moderate talk.

Exhibit A: major Sinema campaign donor Steve Andrews, who says, “Doing anything that’ll alienate voters at this time — it’s gotta be all good. It’s gotta be all ‘Martha McSally is a c**t…’” He notes that Sinema won’t say anything too progressive, probably even after the election, but she’ll be the vote. This is just the way it has to be, he says, because, after all, being a liberal “is not the way to win in this state.” He goes on to say that “she knows to survive and get elected, she’s gotta walk the walk a little bit. And I respect that. I’m tired of losing.” (Emphasis mine.)

When asked how Sinema would actually vote, Snarr says simply, “Democratic.” Then, trying not to crack up with cynical laughter, she says, “She’s going to stand up and protect Arizonans’ values. Whatever the f*** that means.”

Another field official cautions that she has to be “remembering that she is from Arizona, where if she’s too progressive, she’s not gonna get elected.”

Campaign worker Michael Smyser makes an interesting point: that with a six-year Senate term, Sinema will be freer to settle in and vote as a progressive. Having to worry about getting elected every two years really makes it hard to suddenly start swinging left! It takes a little time to get the public on board. My thought is that in a blue state, this wouldn’t matter, but in a red state such as Arizona, it definitely would.

So the public Kyrsten Sinema is dutifully practical, moderate and nonpartisan and will tell you so face-to-face: “During my six years in Congress I’ve been nonpartisan, really just solving people’s problems on a really practical level.”

Arizona, you have a big problem right now, and she is it. You have someone wanting to be your senator who sees deception as a means to an end.